A distinguished jury has selected the winning design in the sixth annual City of Dreams Pavilion Competition: Hanger Barn by Folio (Youngsu Lee and Bosuk Hur). Pending approvals and fundraising, this temporary art structure will be assembled on Governors Island and open to the public for the summer 2016 season.

The annual competition is hosted by FIGMENT, the Emerging New York Architects Committee (ENYA) of the American Institute of Architects New York Chapter (AIANY), and the Structural Engineers Association of New York (SEAoNY). The City of Dreams Pavilion, so named for its focus on the future of a world that faces strains on both economic and natural resources, aims to promote sustainability-oriented thinking amidst the architecture and design communities. The competition requires designers to consider the environmental impact of their designs in everything from materials sourcing to disposal (or ideally reuse) of waste at the end of the season.

Folio promises to construct the 2016 pavilion, Hanger Barn, out of used wire coat hangers sourced from dry cleaning facilities and other places of reuse around the city. Jury member Benjamin Jones, designer of the FIGMENT Treehouse that has appeared on Governors Island for the last five summers, says he’s excited because, “It takes something entirely non-structural and makes a structure out of it.”

Folio’s proposal for the Hanger Barn turns recycled clothes hangers into a pavilion using modular design techniques. It also creates the illusion of motion due to the placement of the hangers in fractal patterns, which create shadow effects on the ground below that change with the movement of the sun. The modular design is composed of the hanger’s original triangle shape, rotated and paired with mirrored segments that connect with zip ties. The intention is for the materials to be reused after disassembly at various sites around New York City.

The winning design team will work with FIGMENT, ENYA, SEAoNY, and Governors Island to select the exact site for Hanger Barn, refine the design, obtain necessary approvals, and fabricate and install the pavilion on the island.

FIGMENT is accepting tax-deductible donations to support the fabrication, installation, and maintenance of the pavilion on Governors Island for the 2016 summer season. Donations can be made by following the link here: http://www.figmentproject.org/donate. The project will likely also be launching its own funding campaign.

The jury initially reviewed over 100 design proposal submissions and selected four finalists who each had a month to further develop their designs in response to the jury’s comments. The three additional finalists were:

Catch Me if You Can by Multiply (Armand Devillard, Victor Diaz Ortega, and Nicolas Moser)

The pavilion is an evocation of childhood memories: a large corn field sheltered under a light canopy, where visitors can relive a first hidden kiss, a game of hide and seek, a nap, or a racing slalom through twisting paths. The pavilion will use slalom gates, which are useless during summer, borrowed from a ski resort outside NYC and returned for the next ski season.

Nooks and Granny Squares by Crystal Collado and Kara Vujanovich

Nooks and Granny Squares invites visitors to experience different spaces created by dome-shaped structures and a tactile skin. The main public space, formed by two large domes, allows visitors to gather in the shade and enjoy a performance. The crocheted skin is comprised of panels made up of recycled plastic bags and separates a semi-private interconnected cove from the main space, while partially open to the views of Governors Island. The nook, independent from the other domes, functions as a snug and private space for up to four people. Open and closed weaves allow light to filter into the pavilion during the day and escape at night, creating memorable moments at any time of the day.


The Pneu Pavilion is a lightweight, air filled structure suspended at varying heights to create a smooth gradient between tall and short spaces, accommodating a wide range of age groups and activities. The tensile structure is made entirely from demountable and reusable structural components, while the inflated structural pillows are built from recycled vehicle inner tubes contained within layers of porous mesh. The air pressure in the skin allows the thin material to achieve the large span between the lenticular cable trusses, providing a soft surface that encourages viewers to interact with it, while the repeating pillow-like forms give the canopy a cloud-like appearance. 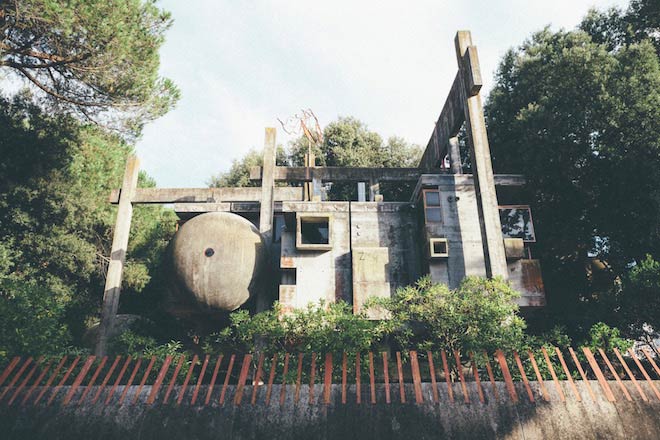 January 17, 2016
0
This jaw-dropping stack of concrete boxes and beams, interspersed with glass windows and one wild sphere, looks a bit out of this world but it's not