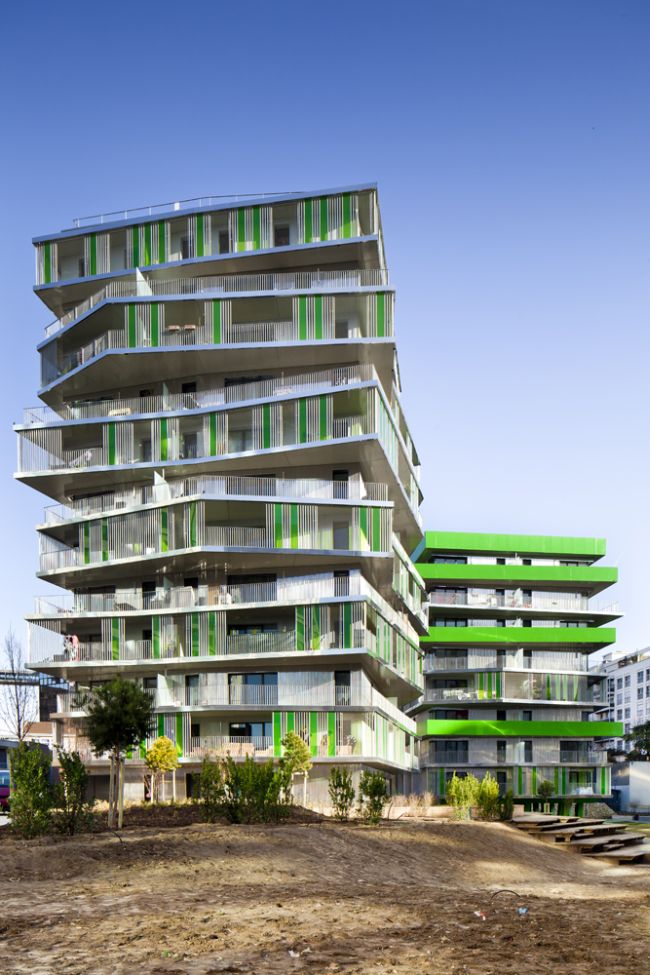 A couple of stone’s throws away from the Gare de Lyon in Paris, whose business district was designed in the 1960s and 1970s by the architect Louis Arretche, lies the Villiot-Rappée block, which is directly connected to the Seine and predominantly residential. Over the last 10 years it has been the subject of a programme of demolition and reconstruction orchestrated by Paris-Habitat OPH.

Hamonic + Masson’s project is tucked away in the middle of this block and invisible from rue Villiot apart from through an entrance pierced through the built-up façade of seven-storey blocks of flats. It is hidden from rue Van Gogh by gigantic screens of offices and can only be glimpsed from Quai de la Rapée through the occasional break in the row of recent housing developments. 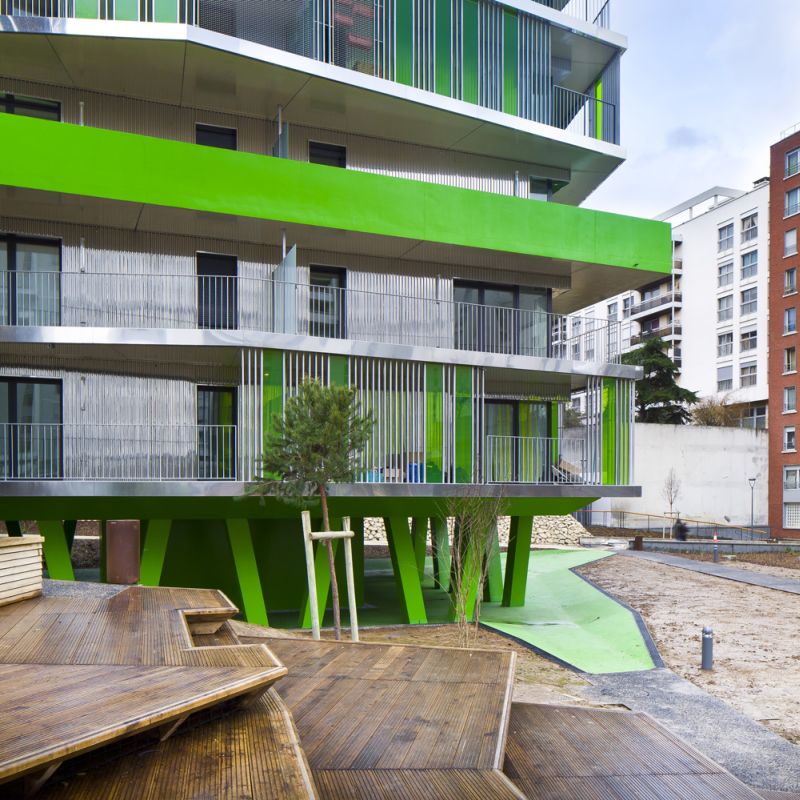 The buildings on the fringes of the plot rise densely into the sky. The plot is an enclave, with all the advantages that such a position affords: supposed protection from the hubbub of the city, very few cars, the homely character of a site in a clearing, as well as the ground-level space around the plot which opens it up to the sky and floods it with light. 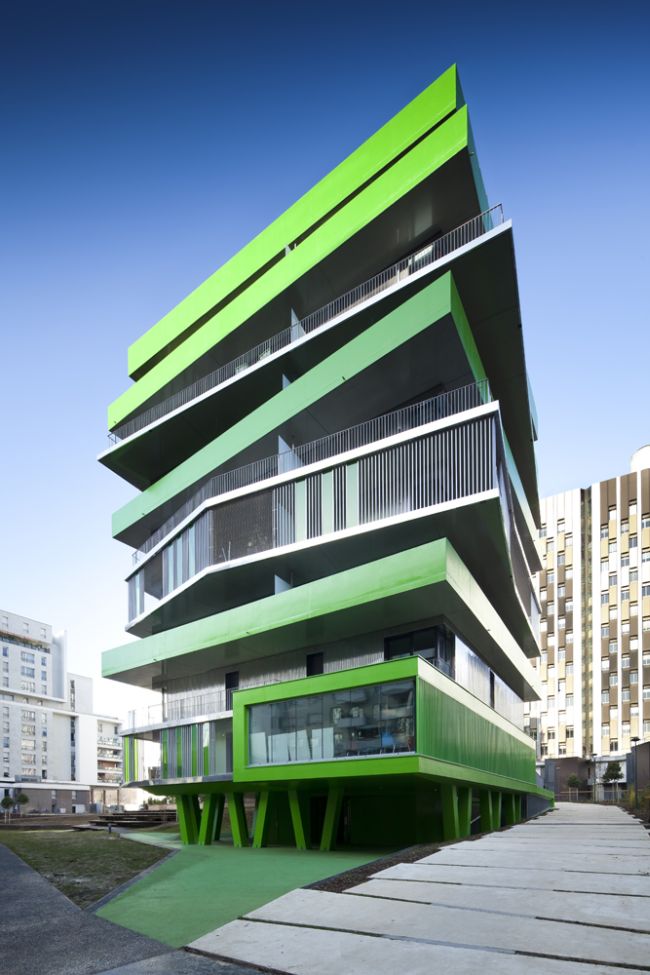 A breath of fresh air
The project embraces new concepts of living together primarily based on generous outdoor spaces, both private (balconies) and communal (floor area), as well as on an extrapolation of the advantages of detached houses, which have now disappeared forever from Paris – having one’s own floor space and thus being rooted in the soil.

The starting point of the project, the ground, accompanies and moulds itself to the natural level, twists and transforms itself, hosts different disciplines, guides and accompanies residents, visitors and passers-by – and makes it into a home. 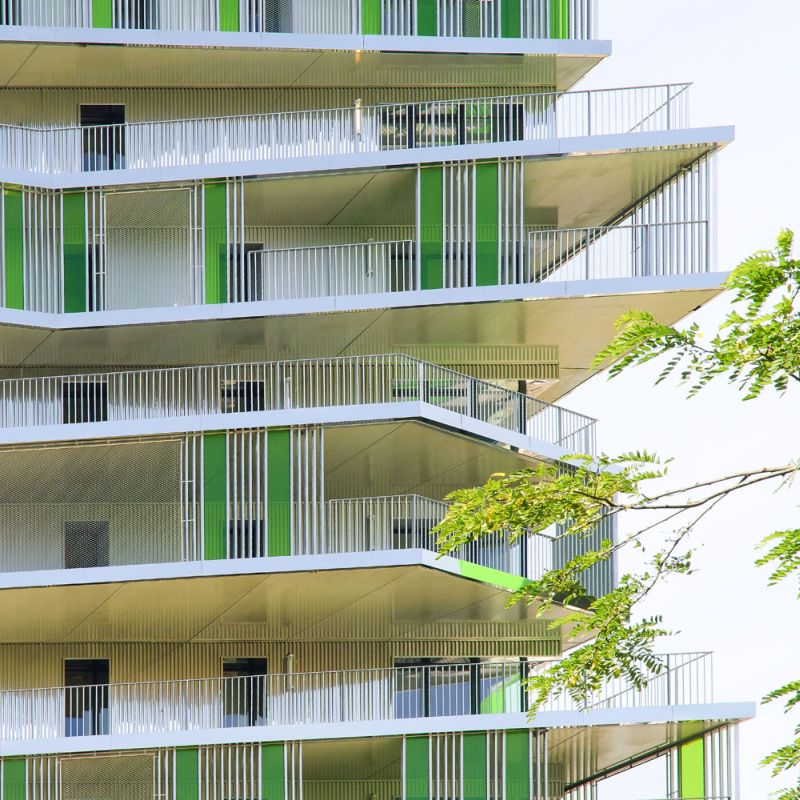 Each level and each flat has a different floor lending itself to different practices and uses. Rather than being like a balcony, a loggia (or a terrace), which can be seen and used on a daily basis, winds its way around the outside of the flats and gives residents the feeling that they live outdoors. This “poured garden” creates close ties to the building’s external environment.

Two hybrids
The project involves two blocks of flats, one of 11 storeys above the ground floor and the other of 8 storeys above ground floor. They stand out not only because of their height but also because of their movement, one being a hybrid of the other and their proximity creating the impression of shifting morphology. They are connected by their moving relationship to the ground. 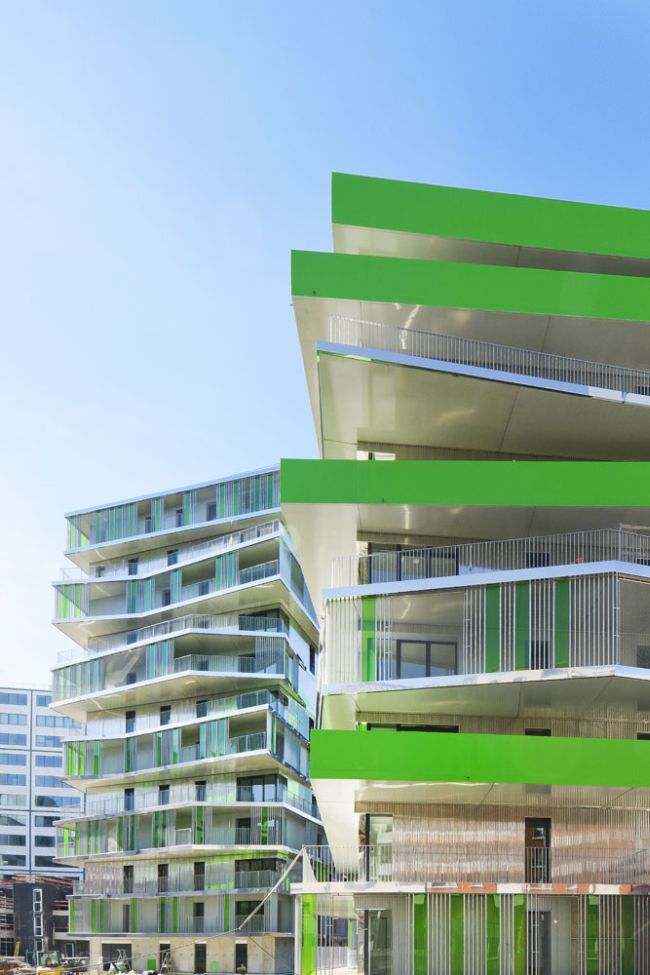 Eyes Wide Shut
The two blocks of flats have 360° views, like watchtowers, even though the crowded horizon prevents them from being open to the four winds. The realistic approach to these surroundings gives a different feel to everything. The internal space at each level of the two towers, measuring 16 m by 17 m, is well designed and structured as an open space around a central core housing the stairs and lifts, but instead of the expected openings and the hoped-for transparency, there is a game of mirrors.

These high-rise flats do not have a sweeping view of the horizon but rather eyes that are half-open and directed towards the centre of the island. 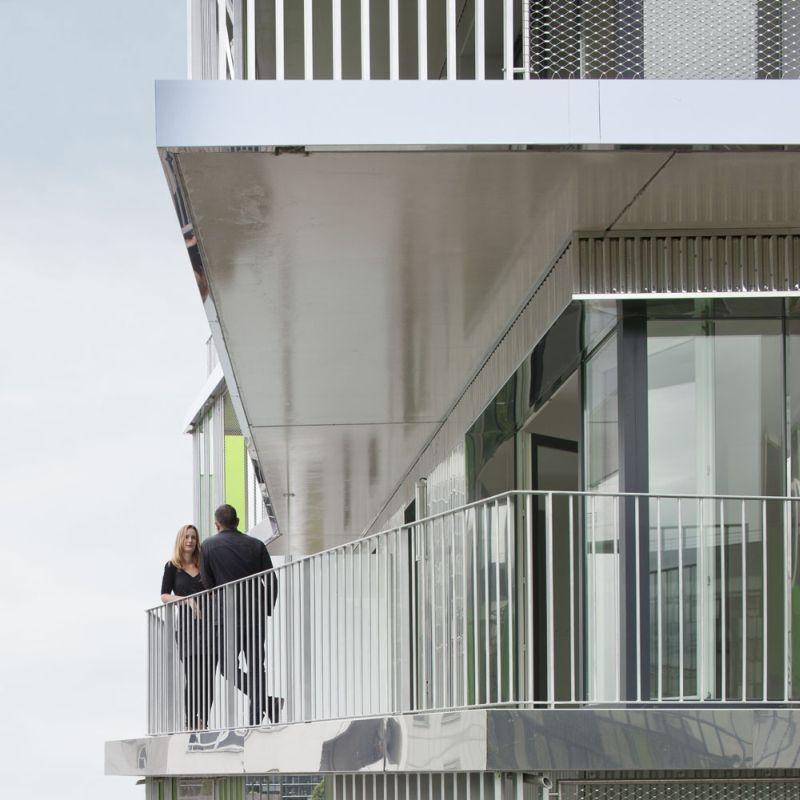 Climate planning and sound-proofing have also left their mark… and permitted a system of “truly outdoor spaces” that are therefore independent of the internal floor-plan, creating a stack of more or less closed terraces and more or less open loggias wrapped around the four sides of each tower like a “serpentine”. One can stroll around a flat, walk out of the bedroom and into the living room; there are many paths to choose from and many surprises in store. But the main thing is that no one can see their downstairs neighbour, and the flats opposite are occluded by screen walls and balustrades.

Inside, the flats are arranged around a central structural core that houses the flows, stairs and lifts. Each landing serves three to four flats. Only these cores and the façades are weight-bearing, which means that the decks can be opened up and the floor-plan reversed. Flats today – but tomorrow? 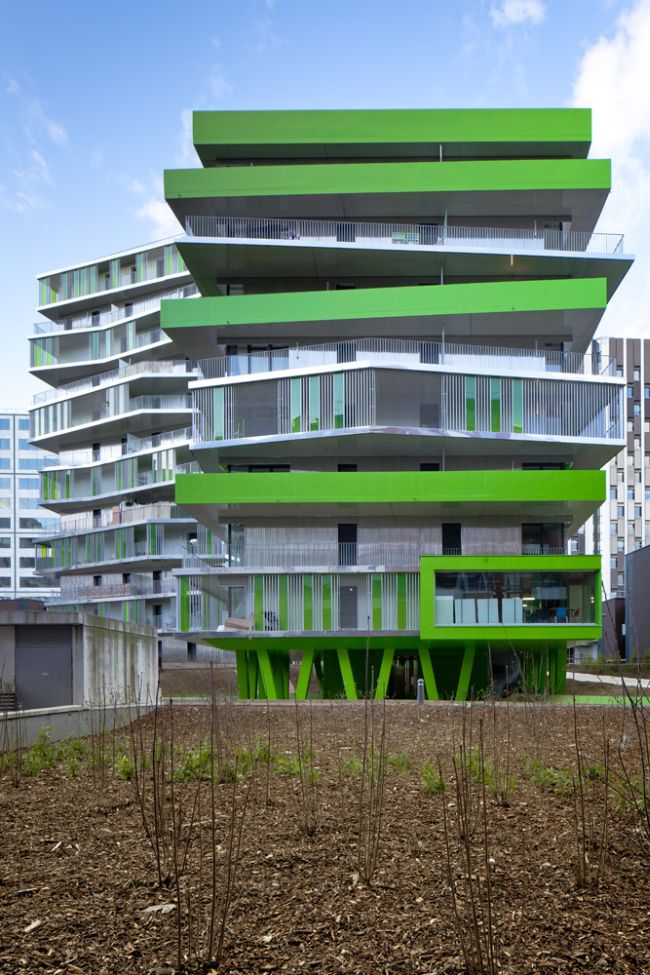 The silver-coloured gangway ceilings underscore the difference between inside and outside. The loggias in the covered ribbons are clad in aluminium and the balcony areas in stainless steel. Then, a system of aluminium screen walls, coloured glass, stainless steel lists and mirror sheets, stacked up on top of each other, storey on storey, contribute to deconstructing the façades and to mix up inside and outside, giving our two towers a Parisian caravanserai look.

The Villiot-Rapée development is the materialisation of plans to build 62 council flats in the heart of Paris by stacking flats inside high towers. This building “only” rises to 11 storeys of flats due to current Paris planning regulations. That is higher than Haussmann’s rules allowed, but it is easy to imagine the tower being much higher in this particular location since it appeases our fear of the void, satisfies a feeling of open skies and takes a shape that is strangely homely and familiar. The development’s expressiveness, construction principles and typology all conform to a concept of high-rise building that is typical of the Hamonic + Masson agency. The agency has a characteristic approach based on the triangulation of the relationship with the exterior, rational construction and a horizontal style.