The Marc Younan architecture office converted an industrial building into 85 different social housing units, in the 18th arrondissement of Paris. The project provided an opportunity to reinterpret a formerly industrial structure and to create a coherent ensemble endowing the building with a singular identity.

The project involves the conversion of an industrial building dating from the 19th century into 85 units of social housing, and a nursery with space for 40 cribs, as well as a commercial space and a parking garage. The existing building, which has served a series of varied activities – first as a dairy, then for food processing industries, followed by maintenance workshops and a printing business – was built on a trapezius plan around a courtyard covered with an industrial glass roof sheltering delivery docks.

Additional floors and smaller building adjacent to the existing structures resulted in a highly heterogeneous ensemble, whose varying styles attest to the successive periods of construction.

In 2009, Linkcity acquired the site in a sale-before-completion transaction of a mixed-use program development project which includes an EHPAD (retirement home) and rental housing units in the newly constructed part, and social housing units, a nursery, a parking garage and a commercial space in the rehabilitated part.

The project’s salient feature is the blending of the existing framework with that of the new addition. This involved the rehabilitation of the existing part and reinterpreting and adapting it to current needs and uses and creating additional volumes to fill in the empty and neglected spaces.

One of the main difficulties encountered was the quest for light. The building is quite thick. Caught deep between the two opaque walls of adjacent buildings, it only offered two façades with generous views: one facing the boulevard Ornano, the other the interior street.

The façades overlooking the courtyard, now covered at mid height by a glass roof, only offer views of an altered quality, where one’s gaze ricochets from one façade to another façade.

Therefore, the façade facing courtyard and the street had to be repurposed by removing the glass roof and crossbeams on the south side, thereby allowing light to penetrate, and offering better views and enhanced acoustics of the façades overlooking the courtyard.

If the façade on the boulevard Ornano has kept most of its original features, the façade facing the street and courtyard have been reworked based on the existing elements. New simple and contemporary volumes have been inserted into the lower levels thereby creating a new base floor.

The upper part has been reinterpreted with the vocabulary of the structural framework of exposed brick panels and frames in a tightly woven vertical rhythm.

The apartments have been designed to offer generous sunlit spaces. In the duplexes, volumes widen in spots to compensate for the constraints imposed by the existing structure. Their interior circulations are treated as playful pathways, occasionally revealing unexpected points of view from deep within and on the lower level. The walls feature simple surfaces and forms reflecting light. They compose minimalist and sometimes complex volumes, taking advantage of the constraints of the existing structure as a genuine opportunity to invent atypical spaces, as if they were 85 houses ready to receive 85 different families. 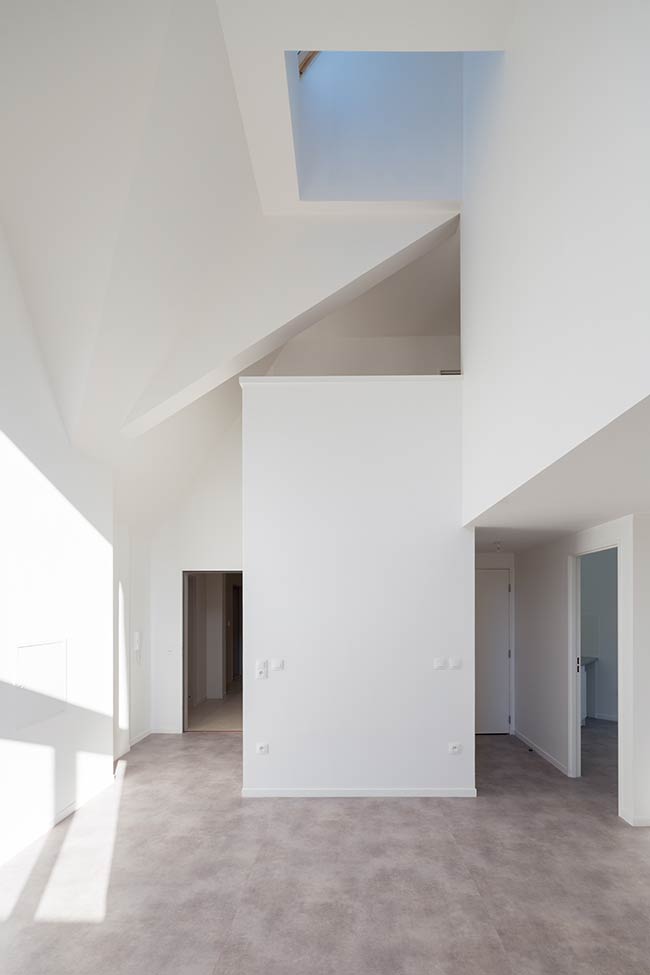 Neither the density nor the framework predestined this building for housing. The quantified housing objective to be achieved required a doubling of the floor area within the same envelope. Spaces had to be inserted between the structures, in both the plan and the cross-section, thereby creating new floors and modifying the height of some of them.