About The Post-War Wave Of Modernist Architecture In Vancouver 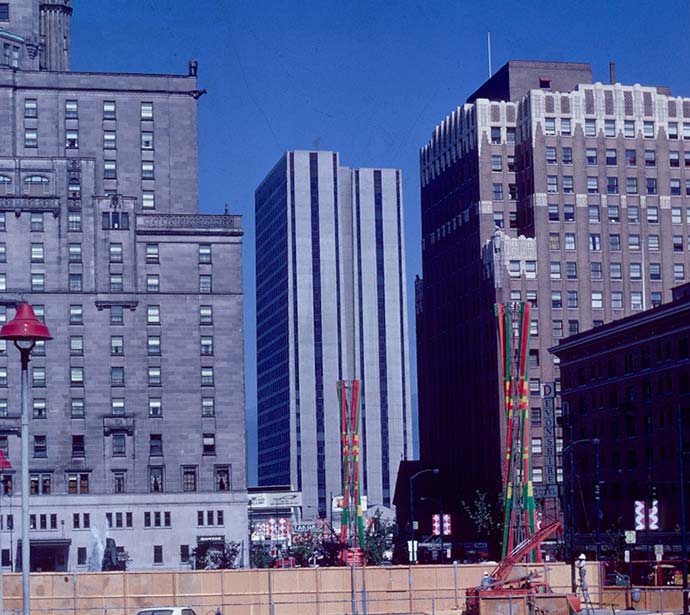 Navigating the streets of Downtown Vancouver can sometimes be an arduous task; the large crowds, deadlocked traffic, and the occasional aimless tourist means one isn’t always able to appreciate the architectural and historical treasures that dot the city’s main thoroughfares. In an attempt to highlight some of these forgotten gems, the latest segment of the Vancouver Heritage Foundation’s walking tour series featured a fascinating lesson on some of the city’s post-war architecture along the Burrard Street corridor. Led by historian Maurice Guibord, the tour told the stories behind some of the business district’s most elegant examples of Modernist, Brutalist, and International styles of architecture, and an informative discussion of the foundations (no pun intended) and cultural evolution of these oft-overlooked and under-appreciated designs.

We began with a quick look at the infamous Burrard Hotel, formerly the Burrard Motor Inn, as an example of the post-war Modernist architectural trend. Nearby, the towering Electra Building at Burrard and Nelson boasts an updated version of the seamless minimalist design that was once home to BC Electric. Converted to condos in the 1990s (the first commercial building in the city to do so), the Electra retains its post-war charms through its elegant, multi-windowed storeys and mid-century mosaic work by BC Binning. Next door, Maurice explained how the Dal Grauer Substation has changed in both appearance and purpose over the years. He noted that perhaps it is somewhat ironic to see an art installation (a beautiful 2015 piece by Jessica Eaton) on a building whose International Style of architecture is defined by its resistance to decoration. The evolution of art in action!

We continued our tour towards the corner of Burrard and Robson Street, to the large building (now home to Victoria’s Secret ) that was once the main branch of the Vancouver Public Library. Completed in 1957 by architects Semmens & Simpson, the building was designed to be welcoming and accessible for all. Many elements of its exterior have been modified or removed for the multiple tenants over the years, and an original interior tile mosaic by Lionel Thomas in the entryway was destroyed during its initial remodel. […]