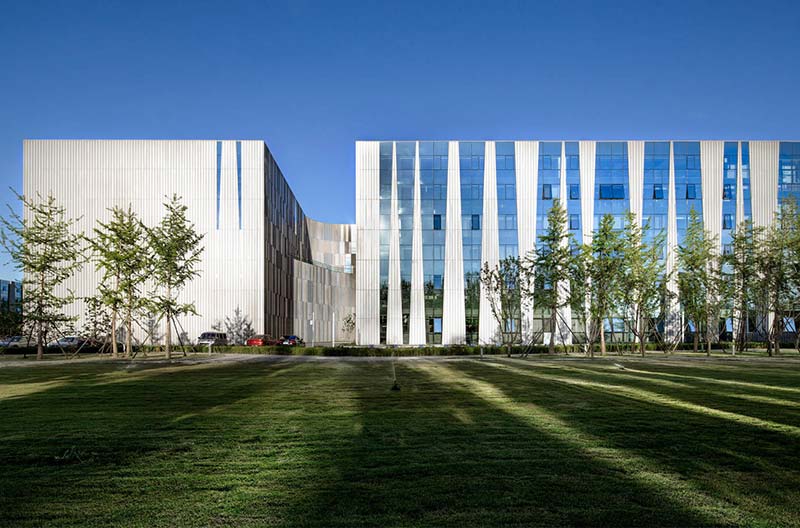 When Aimer first approached Crossboundaries in 2004, it requested a factory compound of 14000 sqm gross floor area that could house conventional storage, manufacturing, and a 300-people dormitory by individual functions. However, as Aimer grew rapidly in China, the leadership quickly foresaw the importance to upgrade its operation shifting from a production-focused business to a genuine fashion brand. In order to reinforce its brand image and adapt to a maturing economy, Crossboundaries was asked to add a Research and Development office, a 23000sqm distribution center as well as spaces to showcase its products. The realized facility of 53000sqm in 2014 represents a successful collaboration between Aimer and the designers in rethinking the future of the Chinese brand that integrates production, brand building with the well-being of employees. 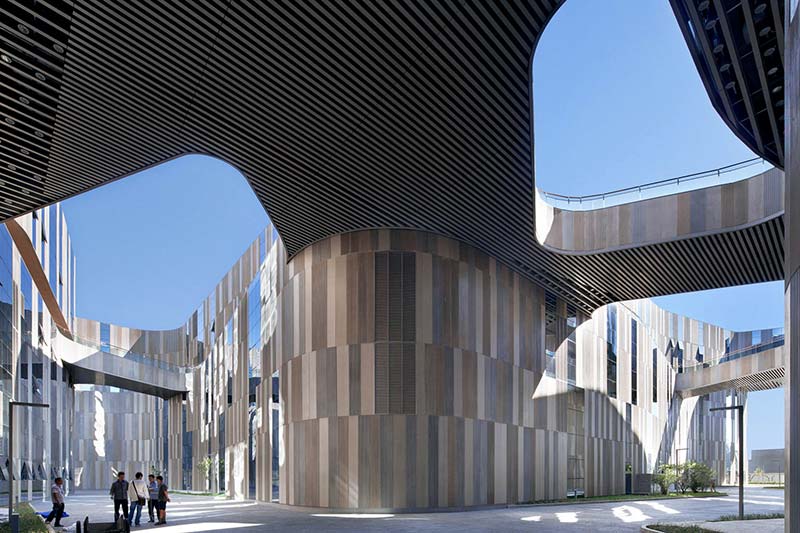 Unity: A facility that reflects the strength of a leading enterprise
To optimize the site, Crossboundaries gathered all business functions under one roof, resulted in a rectangular stand-alone building that presents strength and authority to the public.

Following the idea to boost Aimer’s operational efficiency in order to move up the value chain, Crossboundaries responded with detail research and understanding of how Aimers goods, employees and visitors navigate within and between the spaces. The west public entry into the 12m high lobby invites visitors to the southwest corner of shop and Aimer museum as well as the ground floor conference center that will host industry events. Above the conference center and lobby is the office area, which shares a communal deck with the manufacturing areas, cutting down in-house communication time between administration and production. 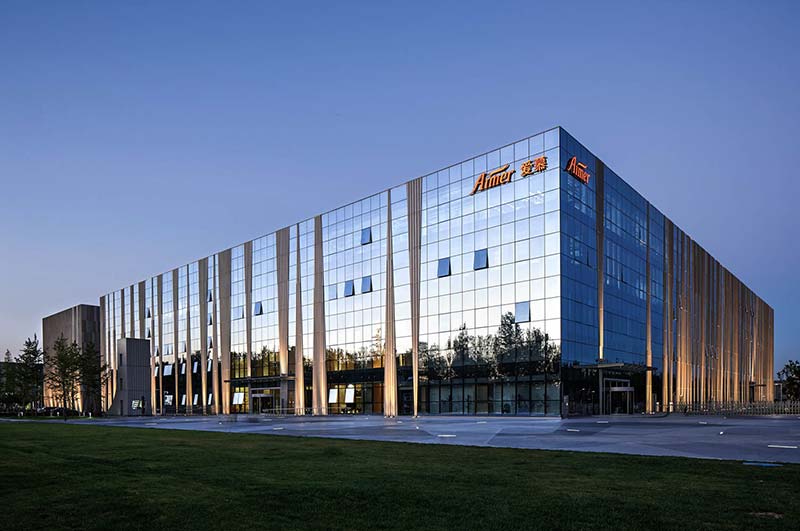 Not only does the complex serve conventional factory needs in a modern way, but it also creates a factory community based on the communist system of a “danwei”. “Even though Aimer is upgrading its operation to meet international business standard, it still provides accomodation as part of compensation for the workers based on the communist idea of ‘danwei’,” said principal Binke Lenhardt. The 600-people dormitory seperates from the facility with recreational areas in between, generating a distinction between work and living therefore enhancing the sense of community for workers. 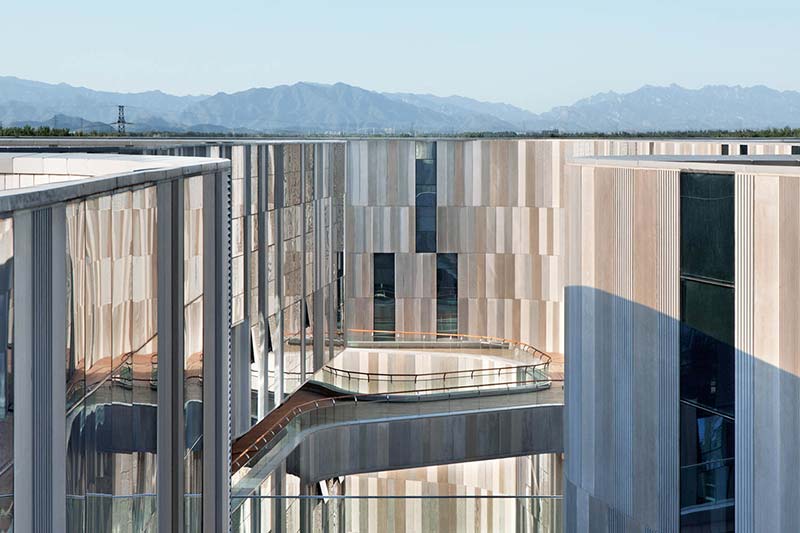 Democratizing: Attending the well-being and interaction of employees
While it is important to the client to present a strong image, Crossboundaries envisioned a factory environment that attends to the well-being of workers and administration employees equally.

By cutting a void in the builiding and placing a communal deck set at level +13m, the doubled public space crossing ground floor and the deck allows air to better circulate horizontally and vertically along the curved inner facade. The use of top-hinged glass windows along the inner facade maximize the amount of natural light that shines into both manufacturing and office areas. This timbered deck therefore serves as a bridge to bring administration and workers to stroll and relax in the same place. “We have to break away from the imprisoning working environment, moving from disciplining workers to engaging communication and breathing within the factories,” said principal Hao Dong. 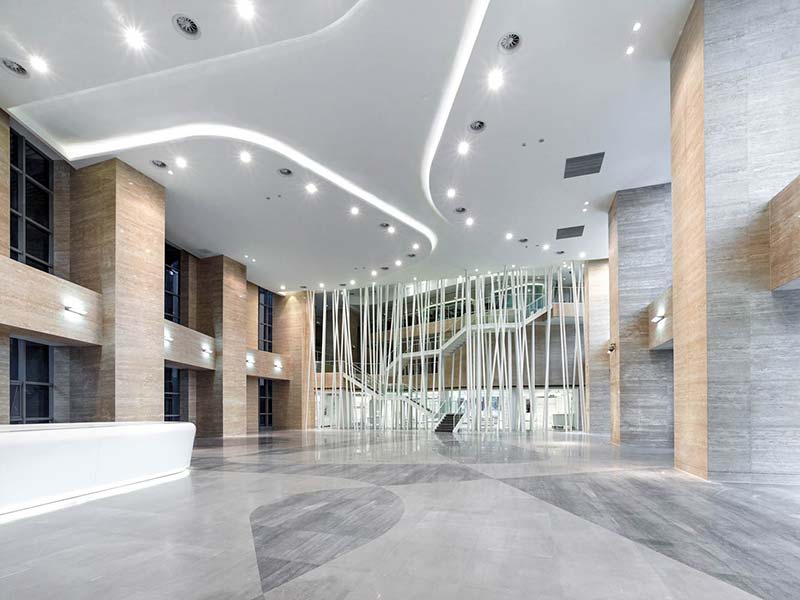 Branding lingerie: Speaking about seduction through architecture
Since Aimer intends to use the building for events, showcasing and industry conferences, Crossboundaries’s deep understanding of Aimer’s vision later led to designing the building’s interior, landscape and signage for a consistent image that reflects the essence of lingerie. Although the industrial nature of the facility is addressed with galvanized aluminum and concrete on the outer and inner façade respectively, the aluminum panles were designed with vertical fins and concrete panels pre-fabricated in order to enliven a flattened cube with tactility. The outer facade transitions from aluminum coverage to a combination of aluminum and glass, accomodating the different levels of lighting required in products-centered areas and human-centered areas. The visual effect of the facade therefore reflects the nature of lingerie: coverage and transparency. 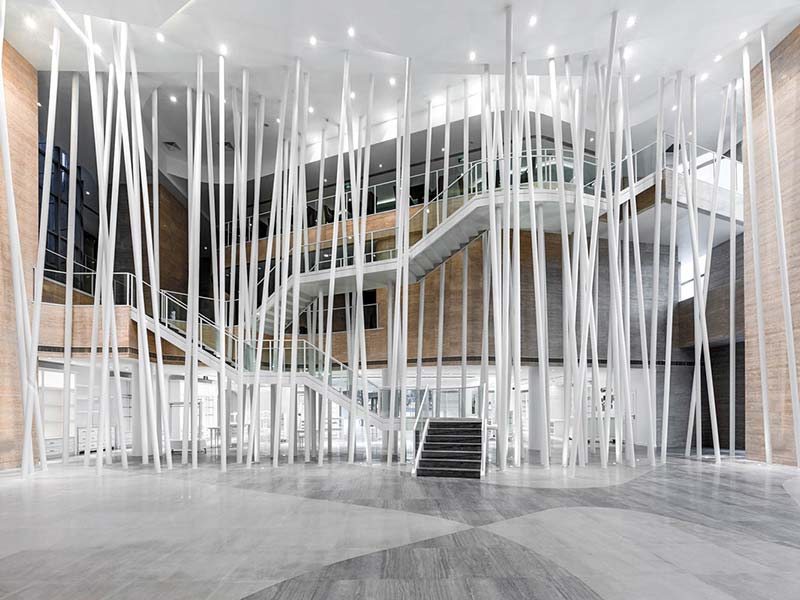 The staircase in the lobby winds around a veil of slender white columns set at various inclinations screening off the shop and museum. It also doubles as an decending catwalk for models to reveal a new collection of lingerie, emerging from behind the veil to the audience in the lobby. This sense of exploration and mystery is frequently echoed in lighting, walkways and voids with curves and rounded quadrilateral patterns, which were extracted abstractly from selections of lace. 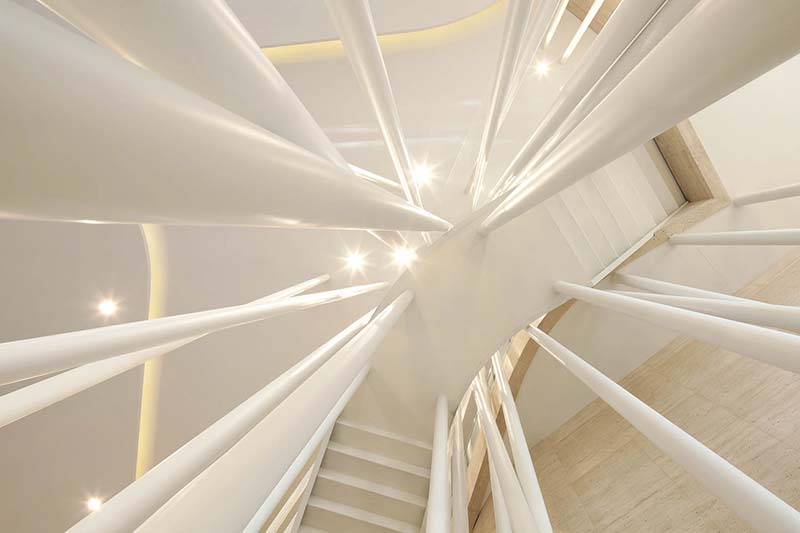 Future
While the county of Shunyi sees a growing number of industrial architectures and outlets, the Aimer Factory’s contemporary aesthetic and functions allocation are designed with the future in mind: the possibility to use the architecture for other purposes and setting Aimer apart as a leading national brand that will be ready to compete internationally.