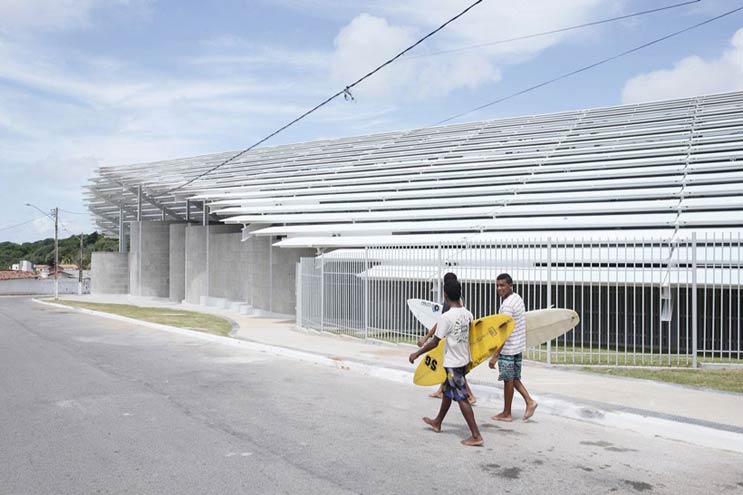 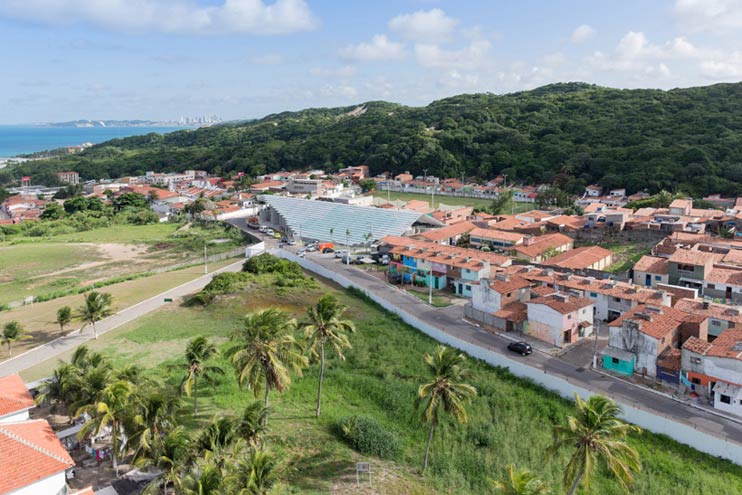 The project for the gymnasium “Arena do Morro” is the first project that has been realised within the wider urban proposal “A vision for Mãe Luiza”, which the architects developed together with the Ameropa Foundation and the Centro Sócio Pastoral Nossa Senhora de Conceição in 2009. 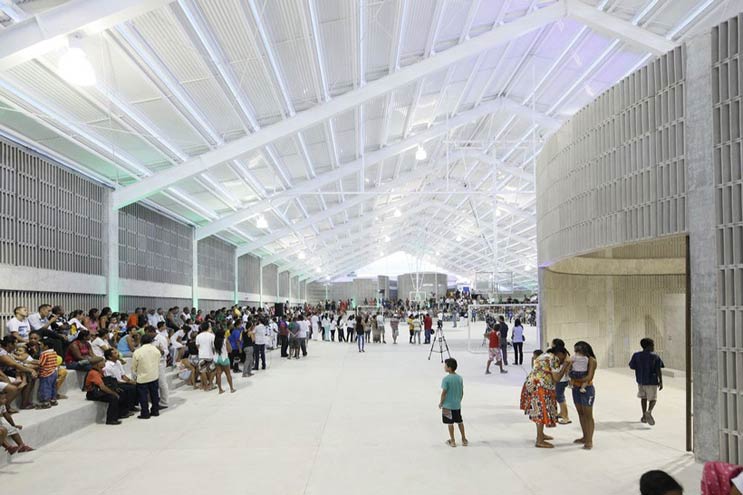 Mãe Luiza is not a typical “Favela” – its identity and character have been formed both by the unique natural setting and the creativity of the people of this strong community. Mãe Luiza is nestled between the protected natural zone of the dunes of Natal and the commercially developed oceanfront. Our urban study identifies the missing and underdeveloped urban activities in the neighbourhood, traces available space within the densely built fabric, and distributes new activities within the areas potentially available for development. The proposal includes a spine (passarela) of new buildings and interventions that will form a sequence of public activities perpendicular to the main street of Mãe Luiza and extending all the way to the ocean. The pioneering architectural project within this proposal is the gymnasium, containing a sports field with tiered seating for 420 people, multipurpose rooms for dance and education, a terrace with ocean views, as well as changing rooms and public restrooms. 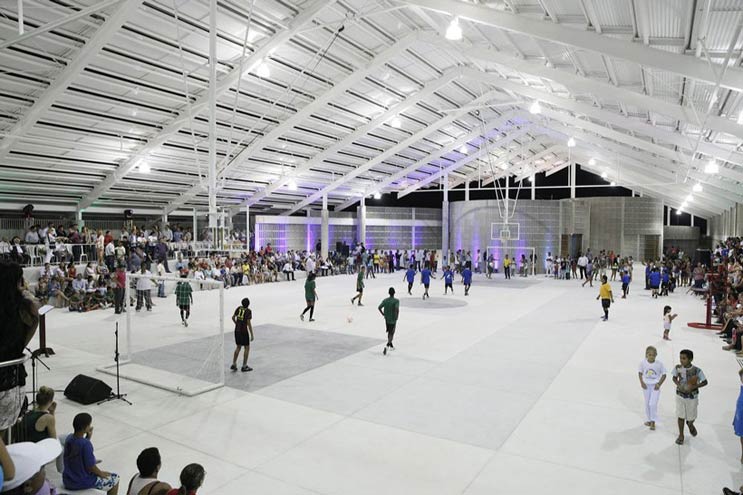 The existing structure of the old gymnasium – a concrete field framed by columns and trusses without a roof or walls – defines the starting point for our project. Its geometry is extruded over the entire building area, creating a single large roof whose shape is limited and defined by the site boundaries. The roof introduces a new scale in Mãe Luiza and at the same time establishes a relationship to the widespread traditional approach of using a generous roof to create large public spaces in the North East of Brazil. It becomes a symbol of the community. Under the roof, the ground forms a landscape made of local terrazzo that follows the existing topography. The seating tiers trace the contour lines of the open field, and the multipurpose room, the dance studios, and support spaces are nestled in between. An undulating independent wall defines the interior perimeter, following the outline of the seating steps around the sports field and the circular shape of the freestanding and more private rooms. The circular volumes underline the communal character of these spaces and the activities within. 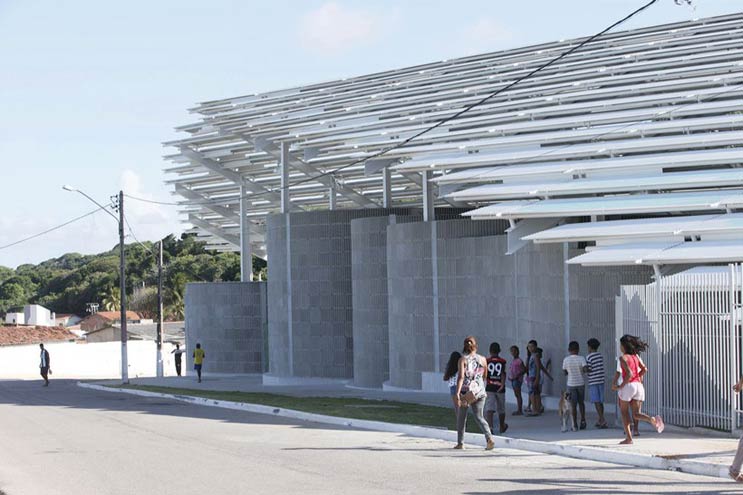 The sheer dimension and the uniform white colour of the roof anchor the building in the otherwise coarse and colourful urban fabric of Mãe Luiza. Like the missing piece of a puzzle, it occupies a large vacant lot at the edge of the quarter, completes it, and defines a new and generous civic place visible from afar. The two ends of the elongated pitched roof open up towards the neighbourhood and invite people in. Once you come closer to the volume of the building, its scale visually disintegrates through its materiality and architectural detailing. 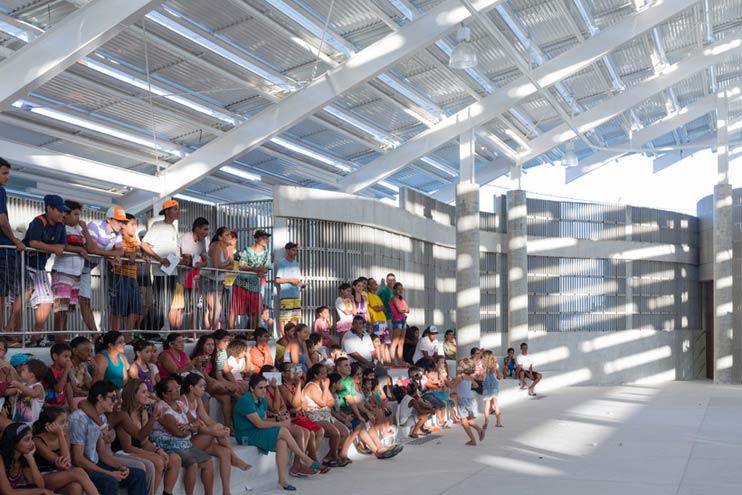 The structure is simple and open, reflecting and responding to the local and available materials and construction
methods. The roof is assembled of standard corrugated and insulated aluminum panels. Instead of being tightly joined, the panels are installed with open yet overlapping gaps that allow light and air in but keep water out. The curvilinear wall beneath is made of specifically developed and locally manufactured concrete blocks. Each block has diagonally positioned vertical fins with rounded edges. By rotating the blocks, different orientations of the fins create various levels of transparency as well as privacy. Both the roof and the wall become permeable and translucent membranes that allow the cooling breeze from the ocean to flow through the building and the hot air to escape, filtering the bright natural daylight and animating the entire building in a play of various degrees of light and shadow. 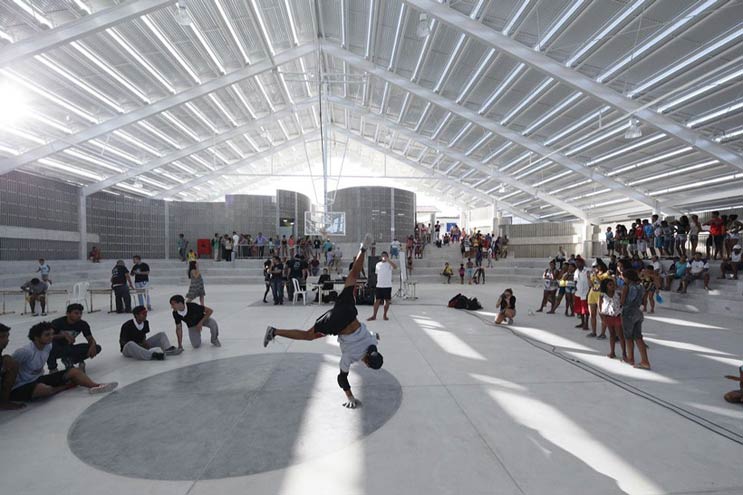 At night, the effect is inversed and the building reveals the activities from within as a giant glowing lantern. The gymnasium is a permeable, fully naturally conditioned building, which transforms and translates the impact of its natural and urban environment into a public destination and focal point for sports, leisure, and cultural activities. Its ultimate success will depend on its day and night programming and its acceptance by the people of Mãe Luiza. 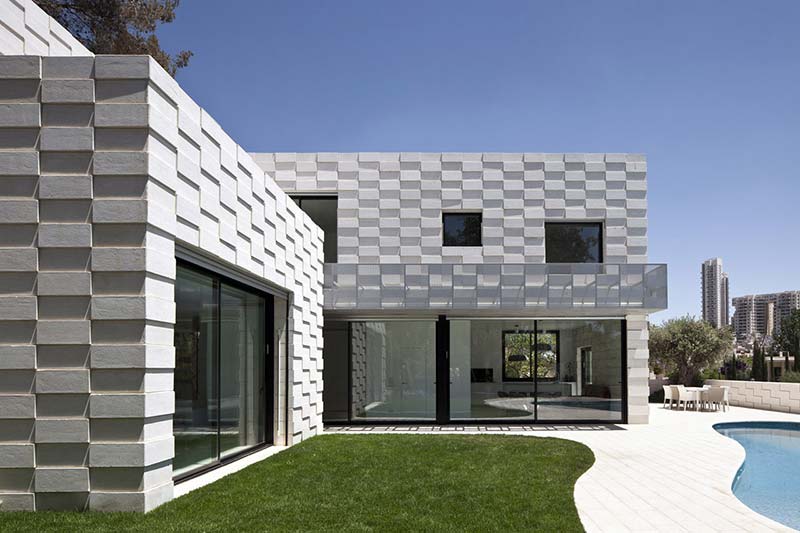 November 13, 2015
0
The house is positioned accordant to the mountain by constructing its first floor as an L-shape juxtaposed to an exposed rock wall