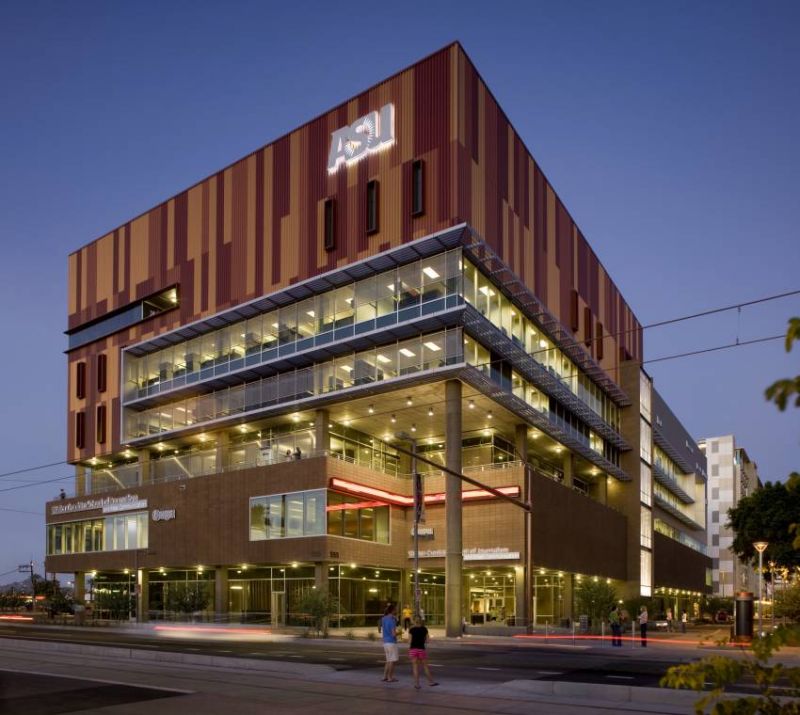 Located in downtown Phoenix, the new six-story, 225,000 sq. ft., 110-foot tall building has become an integral part of the fabric of ASU’s energizing downtown campus and a harbinger of Phoenix’s redevelopment. Delivered in a design-build, fast-track method, work began on design in October 2006 and the school opened its doors in August 2008, 22 months later. School schedules and budgets were both met.

Ground floor retail spaces and ample shaded arcades foster outdoor seating and café life. The main entrance to the structure is under a three-story high “front porch” facing the civic space, and includes a large, scrolling, electronic news ticker highlighting the most current headlines. . Immediately adjacent to one of the stops on the newly completed Phoenix Light Rail and numerous bus stops, the Cronkite School allows students, teachers and professionals to arrive by public transportation. Parking capacity on the campus has been deliberately limited to encourage this. 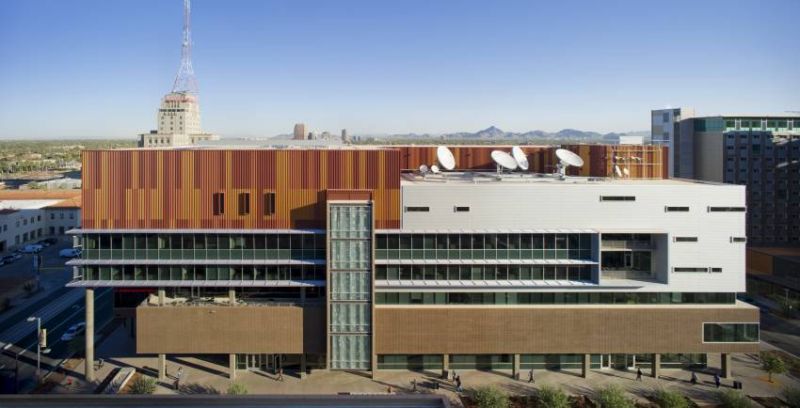 The building’s main entry fronts onto ‘Taylor Mall’ – an urban green belt that runs the full length of the downtown campus. This fosters community connectivity that places student housing, the new downtown Phoenix Civic Space, Student Union and Arizona Center Mall all within easy walking distance. In addition, many of the School of Journalism’s functions on upper levels, including the Cronkite News Service, are oriented toward and have open terraces overlooking Central Avenue, allowing the students and faculty to consistently be part of the bustle of downtown. 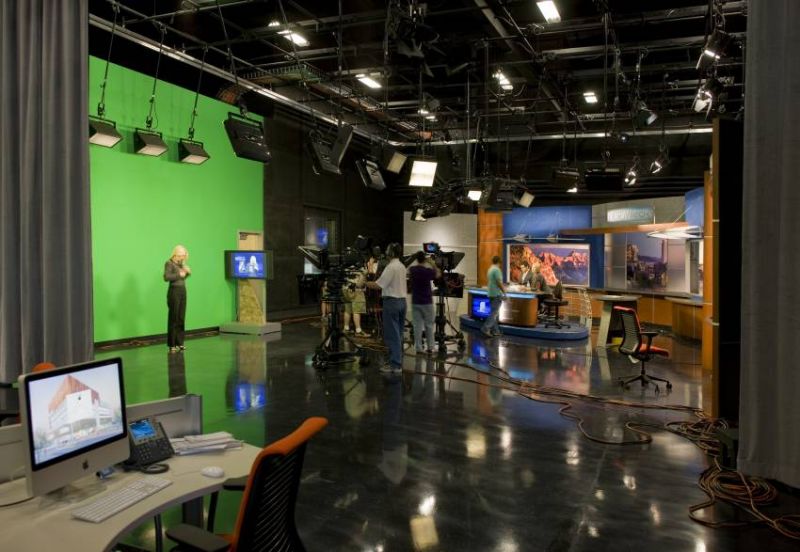 As truth and honesty are guiding principles to journalism – so are they to the design of the building. The architecture is specifically expressive of function and materiality. The design is based on an economical 30-foot square exposed structural concrete column grid with post-tensioned concrete floor slabs. The exterior is clad with glass, masonry and multi-colored metal panels – the pattern of the panels is inspired by U.S. broadcast frequency spectrum allocations (the Radio Spectrum). The composition is kinetic and dynamic – symbolic of journalism and media’s role in our society. The building’s massing incorporates appropriate sun screens on each of the four facades; their specific architectural treatment reduces the heat loads and is one of many of the LEED Silver building’s sustainable strategies. Burnished concrete block walls, ground and polished concrete floors and warm wood ceilings further express the forthright and direct nature of news delivery. 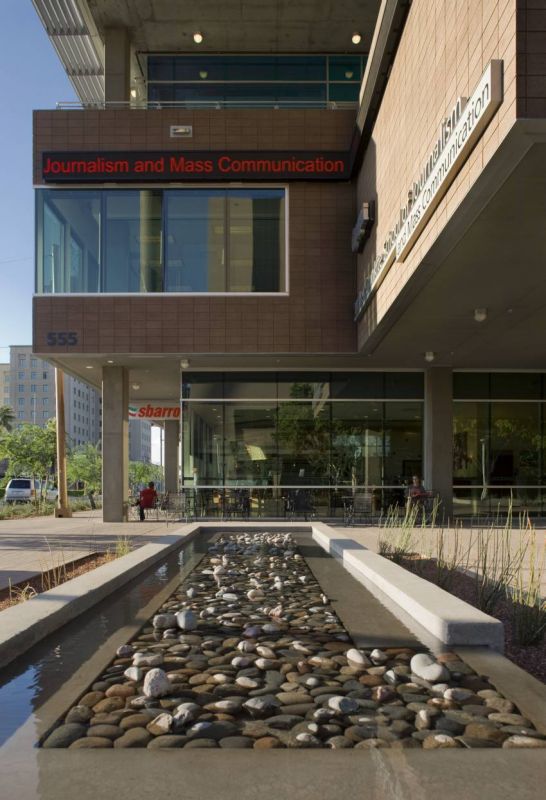 The Architect explains “We have brought a burst of color and life to an emerging district in downtown Phoenix. The building activates the street and instigates collaboration. The activity and energy inside the building is broadcast to the community and beyond.”

The Cronkite School occupies all of the second and third floors and a portion of the fourth and sixth floors. The airy, multi-tiered First Amendment Forum is the heart of the school. By day, students gather spontaneously between classes, and in the evenings, the grand hall transforms into a public forum where students and industry leaders discuss the most critical issues facing today’s news media. The First Amendment to the U.S. Constitution is a theme repeated throughout the building. Floor-to-ceiling versions of the Amendment are found in the lobbies of each floor, and quotes about the importance of the Amendment to journalism encircle and embrace the central forum. 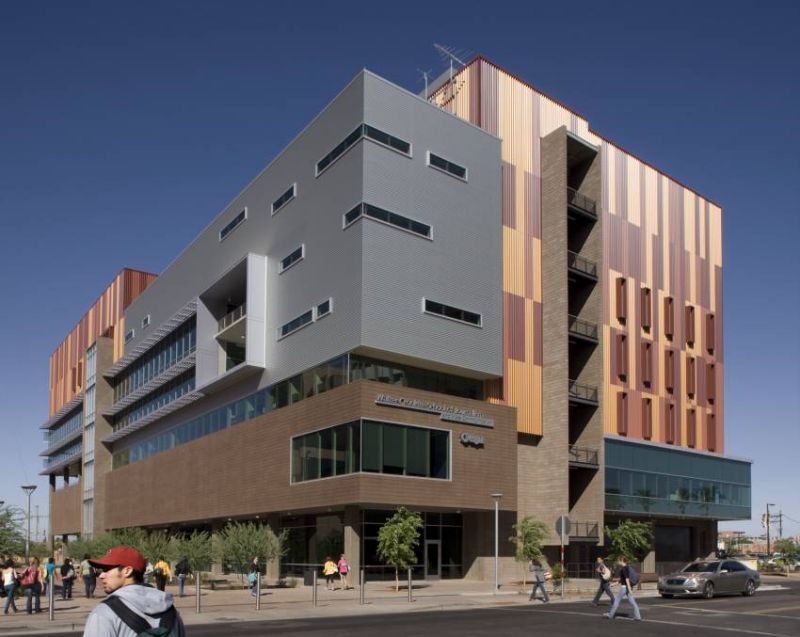 Half of the sixth floor has been custom tailored for the Cronkite News Watch. Both the newsroom and broadcast anchor desks are contained within one massive production space with views overlooking the city and beyond. Flanked by state-of-the-art control rooms and edit bays, Cronkite News Watch is in constant communication with itself and the community it serves. KAET Channel 8 Public TV also transmits live from their state-of-the-art studios on the sixth floor. This top floor location allows for long spans and high ceilings, required for the studios, and is constructed of a prefabricated lightweight steel structure. Satellite dishes from transmission are housed on the roof; they are specifically not screened and directly express the building’s function as one of communication.