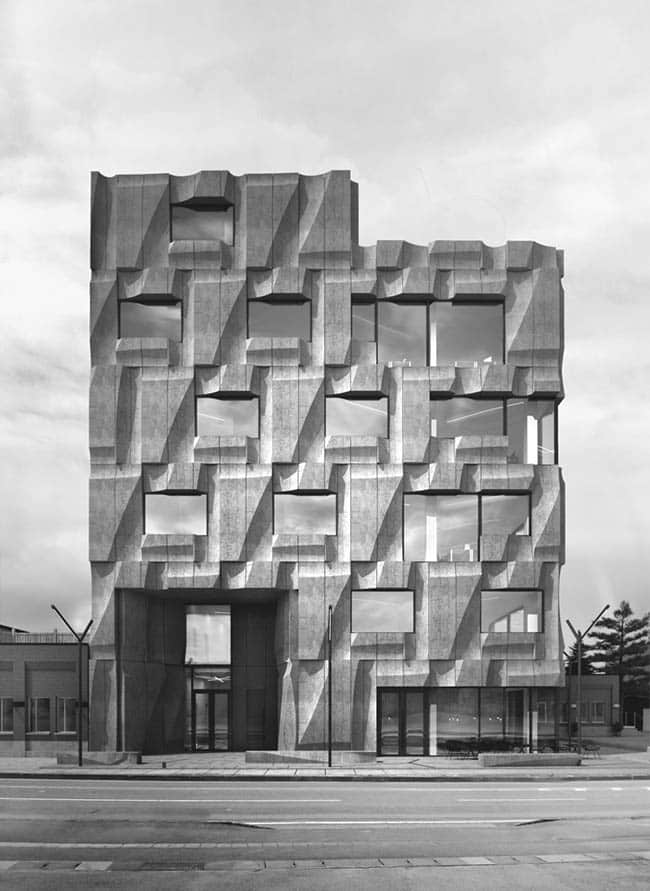 [Misfit]fit is a new six-storey, 32,000 square foot boutique office building situated on a small vacant site in Toronto’s Liberty Village. Seeking to build upon the rich lineage of Toronto’s precast concrete history, the proposal provides an alternative to the pervasive glass curtain wall project. The building’s program is comprised of four floors of flexible office space, retail at grade, and a rooftop sculpture garden/ event space. 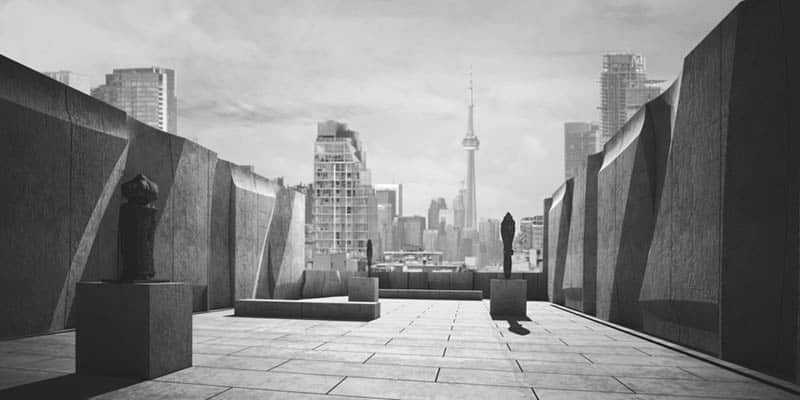 As Liberty Village continues its redevelopment, it’s critical to ask the question: how does one add to this unique building fabric without simply producing what is there, or reverting to a glass office building which so brashly departs from the character of Liberty Village? To propose an answer to this, we looked both within the larger building context of Toronto and within the district itself. 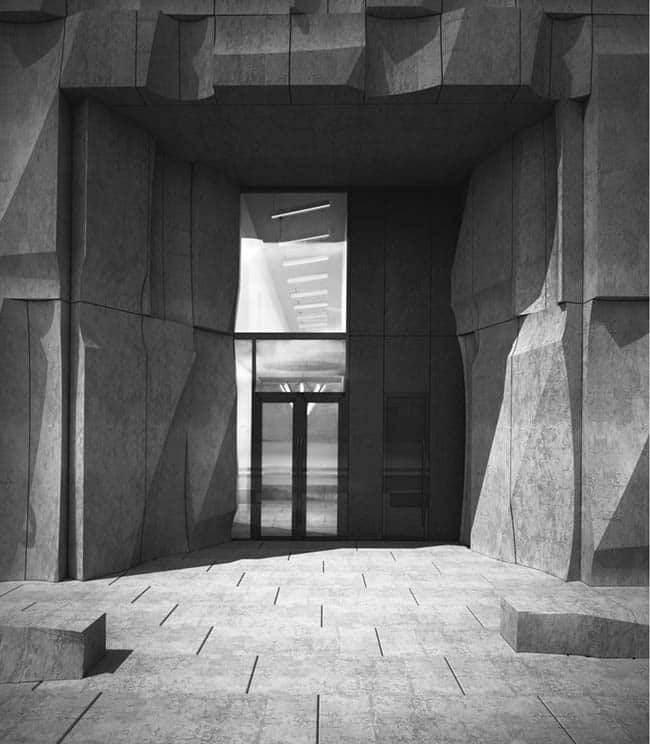 The first step to operating within the context of the site was to study Toronto’s precast concrete project and its history in the city’s development. Despite the prevalence of this construction method it’s been met with great apprehension; so often the mass-produced panels are organized in a highly rigid manner, producing a static pattern of solid and void. Designed with the intention of producing a continuous, modulated surface, the aesthetic ultimately results in a monotonous and monolithic volume. Combined with the weightiness of concrete, the building becomes static, and heavy – a dead weight.

Looking through the lens of Liberty Village and its wealth of architectural character, we seek to revitalize the precast project. The brick details found within the historical factory buildings produce dual readings of continuity and discontinuity of surface, especially present around window and door openings, at rooflines, and along lines of vertical structure. Here, the complexity of coursing techniques becomes intensified, pronounced, and ornamental as bricks protrude and shift in a variety of ways. Importantly, these details depend on a certain balancing act between elements – there can be slippage, but not too much. These moments of activation are important in comparison to the dead weight common amongst traditional precast projects. 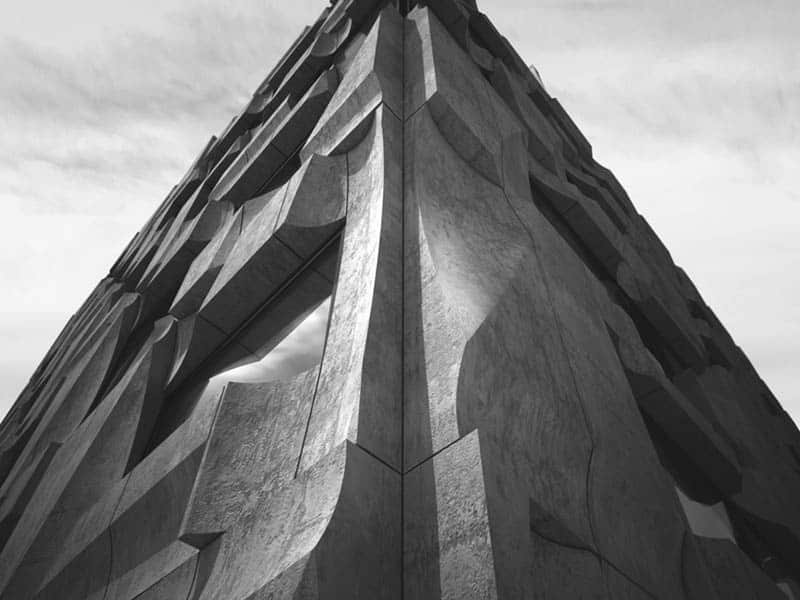 While upholding the paramount value of precast concrete’s economy of repetition, the [Misfit]fit leverages advanced fabrication techniques and reusable moulds in order to move the project beyond just pure repetition. The panelling system focuses on three main characteristics: panel-to-panel discontinuity, stacking and repetition, and tenuous equilibriums. Individual panels are designed hermetically without regard for the overall aggregation or adjacent units. 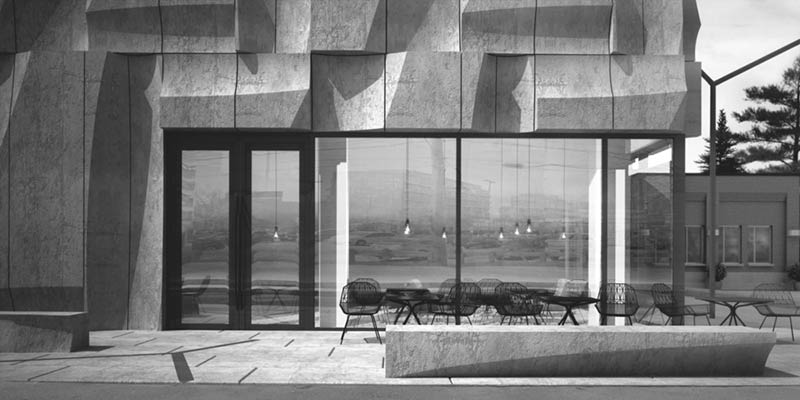 As panels are confronted with one another, their incompatibility is abrupt and glaringly obvious, allowing each element to be read independently against the larger mass. Individual edges and profiles are pronounced, reading not as a singularity but as a rough stacking of objects that have found their equilibrium. Furthering this effect, the corner condition becomes emphasized as a location where panel profiles are fully exposed with discontinuities clear. Apertures are created with the removal of units, a process divorced from the stacking logic which allows for infinite flexibility. 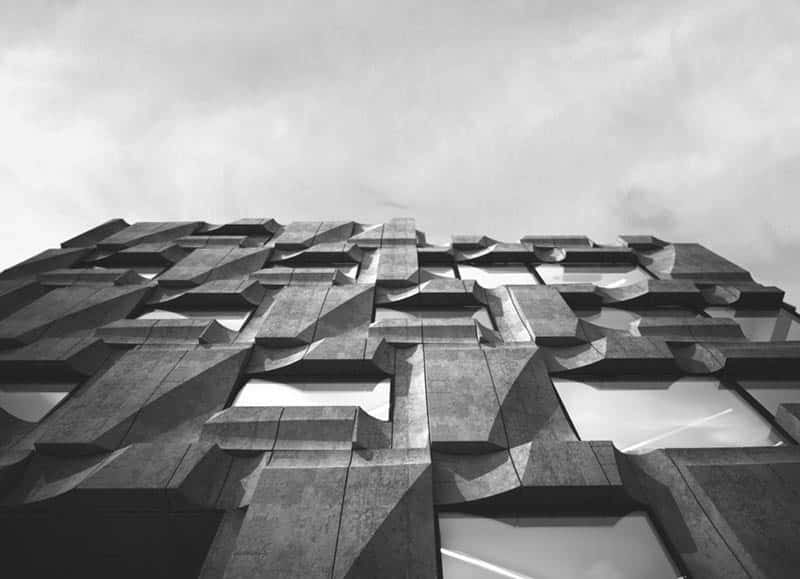 The overall aggregation is produced through a vertical repetition where each row is shifted in relationship to one another. Here, similar panels relate imperfectly but just enough to hold together an overall sense of movement. This process breaks decidedly from the traditional strategy of repetition and homogeneity in the precast project, as well as the contemporary parametric practice of continuous surfaces, both of which pursue the perfect match and produce the monolithic volume. Here the imperfect and tenuous characteristics of the misfit produce new perceptual, formal and spatial effects.