How a years-in-the-making restoration is transforming both an architectural masterpiece—and an entire city.

The great American architect Frank Lloyd Wright is most commonly associated with the Midwest—most notably, Chicago and his native Spring Green, Wisconsin. But there’s an exciting architectural trove of Wright’s work in a less expected destination: Buffalo, New York. And in 2017, the 150th anniversary of his birth, Buffalo hopes to officially put itself on top of every architecture lover’s list. The first step? A years-in-the-making $50 million restoration of the Darwin Martin House, Wright’s first significant commission as an architect outside of the Midwest. Now nearly complete, the house is the lynchpin of a five-site “All Wright, All Day” tour that aims to bring his fans to upstate New York and put Buffalo back on the map as a major design destination.

The Martin House’s story is also Buffalo’s story. Darwin Martin was an executive for the Larkin Soap Company, a Buffalo business that made a fortune by giving deals to customers who purchased their “factory to family” products in bulk—think of it as the forerunner for Costco—in the late 19th and early 20th centuries.

At the time, Buffalo was the eighth largest city in America, with the highest number of per capita millionaires. Martin was one of them. He had an open mind, an interest in architecture and design, and a nearly unlimited budget, which made him the perfect partner for Wright, who had just left a prominent Chicago firm to strike out on his own and make a name for himself. Martin heard about Wright from his brother who lived in Chicago, and ultimately commissioned three buildings from the up-and-coming architect: his home, a smaller house for his sister on the same piece of property, and the Larkin company’s administration building. Years later, Wright would return to western New York to design the Martins’ summer home, Graycliff, on Lake Erie. […] 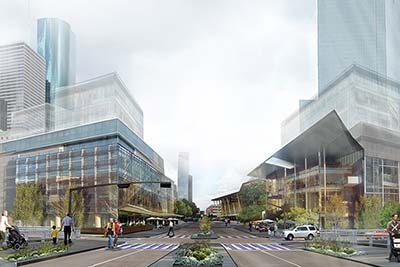