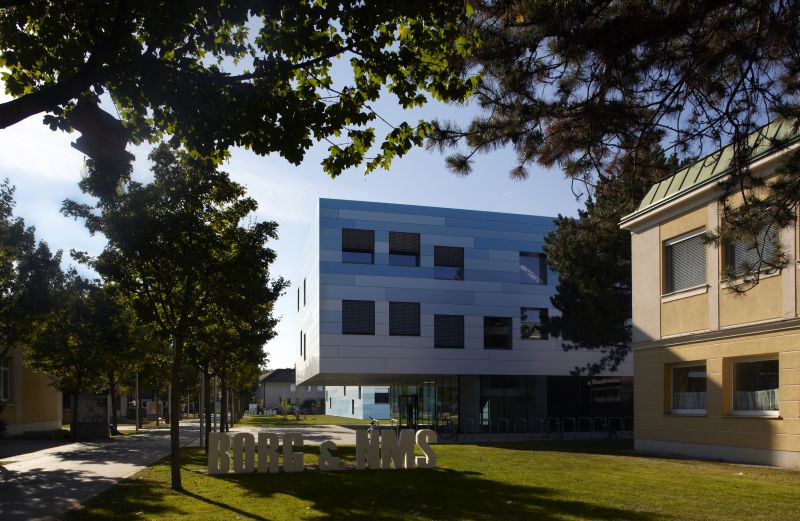 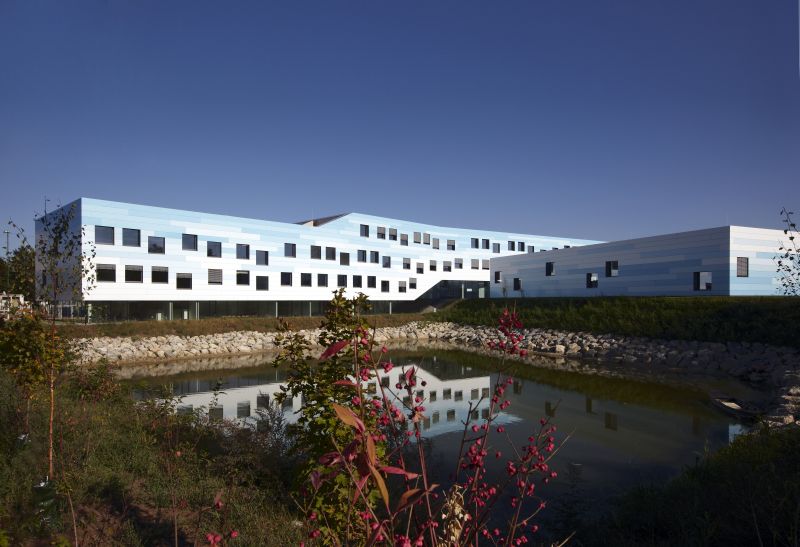 Central and still removed from the heavy traffic of the federal highway one can find the most important public institutions of Deutsch-Wagram lined up along a footpath: city administration, kindergarten, primary and secondary schools. In order to enable school education up to university entrance qualification, the municipal council decided the erection of an upper secondary school with focus on natural sciences and mathematics (“Realgymnasium”). At the same time, the existing secondary school (“Hauptschule”) needed to be expanded. A common institution for both types of school promised to yield valuable synergies.

Spatial proximity to the other educational institutions seemed logical, but the available property with park and landscape pond was a valuable area used by kindergarten and elementary school during recess. Moreover, it was not without problems with regard to structural engineering for a large-volume building task.

The ultimate aim was to preserve the pond’s accessibility and the recess area for all pupils as much as possible. The spatial programme therefore was divided up into two separate structures: a long school block and a double sports hall. The school block’s latitude lies perpendicular to the footpath and at its projecting heading section forms a generous forecourt with a prominent canopied entrance and an adjoining cloakroom and aula. The three- to four-storey structure adapts to the terrain in its ground plan as well as in its cross-section, floating on a circumferential glass strip in the green space. The sports hall is dug in as far as the high groundwater level would allow, and thus stays in measure with the kindergarten and elementary school on the opposite side. To underline its discreteness, entrance for external sport usages and to the spectators’ gallery is gained via an external stairway in close vicinity to the parking lots in the street “auf der heide”. The underground connection to the school block keeps the access to the pond and from the cemetery alley open for the public. 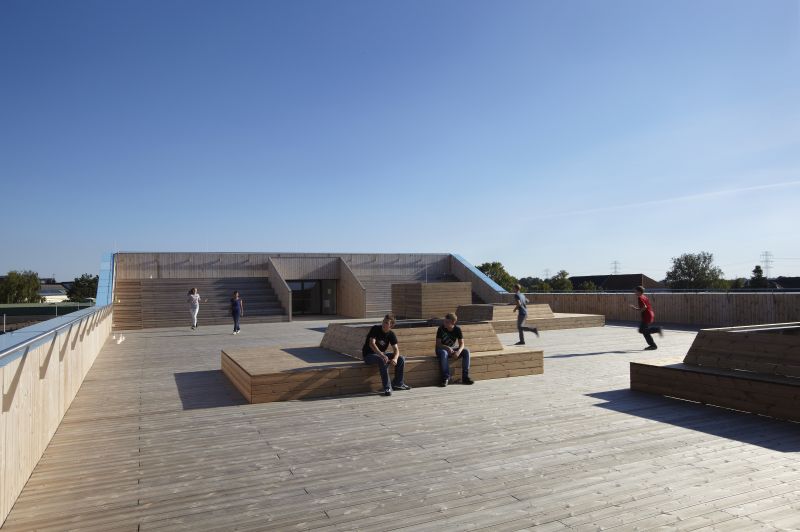 Distribution of functions with synergetic effects
Due to the combination of two types of secondary school, the wishes and requirements of different clients and users had to be united in one building. This was solved on the one hand by separating the main classrooms and administrative areas (“Hauptschule” on the 1st floor, “Gymnasium” on the 2nd floor), and on the other hand by common utilisation of the general areas (natural sciences on the ground floor, classrooms with creative focus on the attractive lower floor on pond level). The shared building makes it possible to use classrooms which are not normally provided in the respective school type (e.g., handicrafts for upper secondary school, chemistry lab for regular secondary school). A shared library extending over three floors is the heart of the building. Sitting steps are an invitation to read, at the same time offering the possibility to hold smaller lectures and presentations. The area on the second floor which had to allow for optional extension was realised in the shape of a generous roof terrace. Deck platforms and sitting steps provide premium recess space in the immediate vicinity of the main classrooms and can also be used for open-air classes. 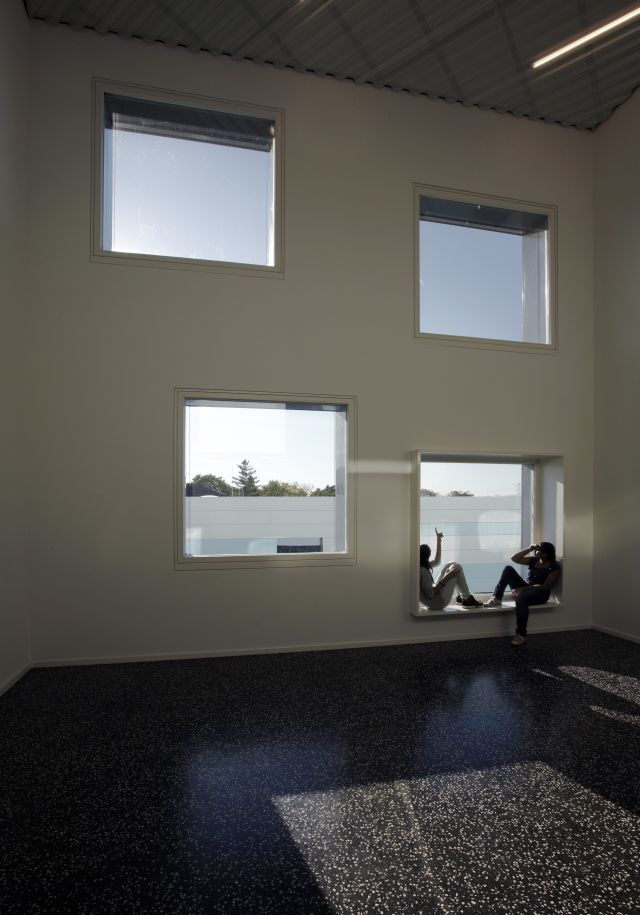 Façade play
In order to signalise the togetherness of school block and sports hall, a façade concept was developed that underlines the character of each of the two structures. The dug-in sports hall grows out of the ground with light blue aluminium panels, dissolving into white the higher it grows, while the floating school block takes up the slab underside’s neutral white and bleeds out into light blue. 175 windows of the same size (1.80 x 1.80m) react flexibly to the different interior spaces like main classes, library or recess areas. Every class gets one window with a deep niche in sitting height as a small local recess zone. The sports hall is equipped with the same square windows, enabling visual contact from outside for passers-by as well as a connection with the adjacent pond for spectators on the gallery. 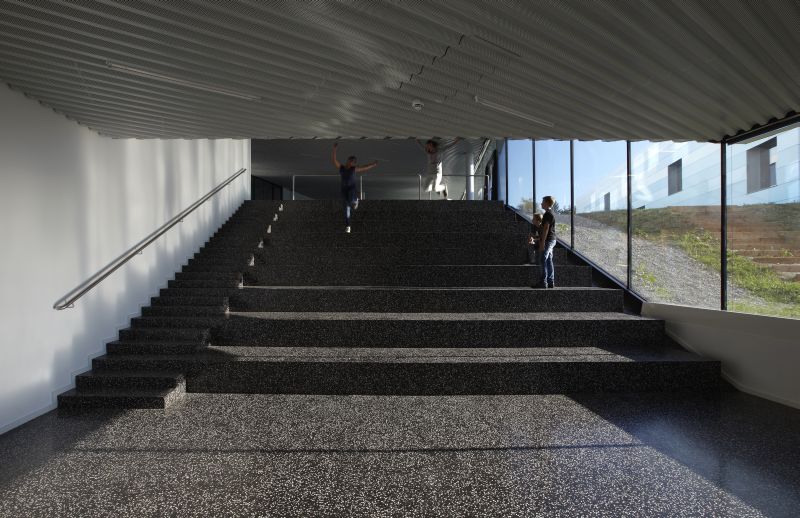 Economy and ecology
A prerequisite for high economic efficiency and low energy consumption was the development of a very compact structure. The 100 meter long middle aisle flares conically at its knee according to movement flows, on the western side opens up towards the pond over two-storey recess areas, and in addition receives natural daylight from four equal stairways on the eastern side.

The sum of compact structure, highly insulated thermic building envelope and a ventilation system with efficient waste heat recovery results in an extraordinarily energy efficient building with passive house qualities. Energy generation by means of groundwater heat pumps and a photovoltaic system, as well as rainwater seepage on its own property contribute to an overall ecological concept. 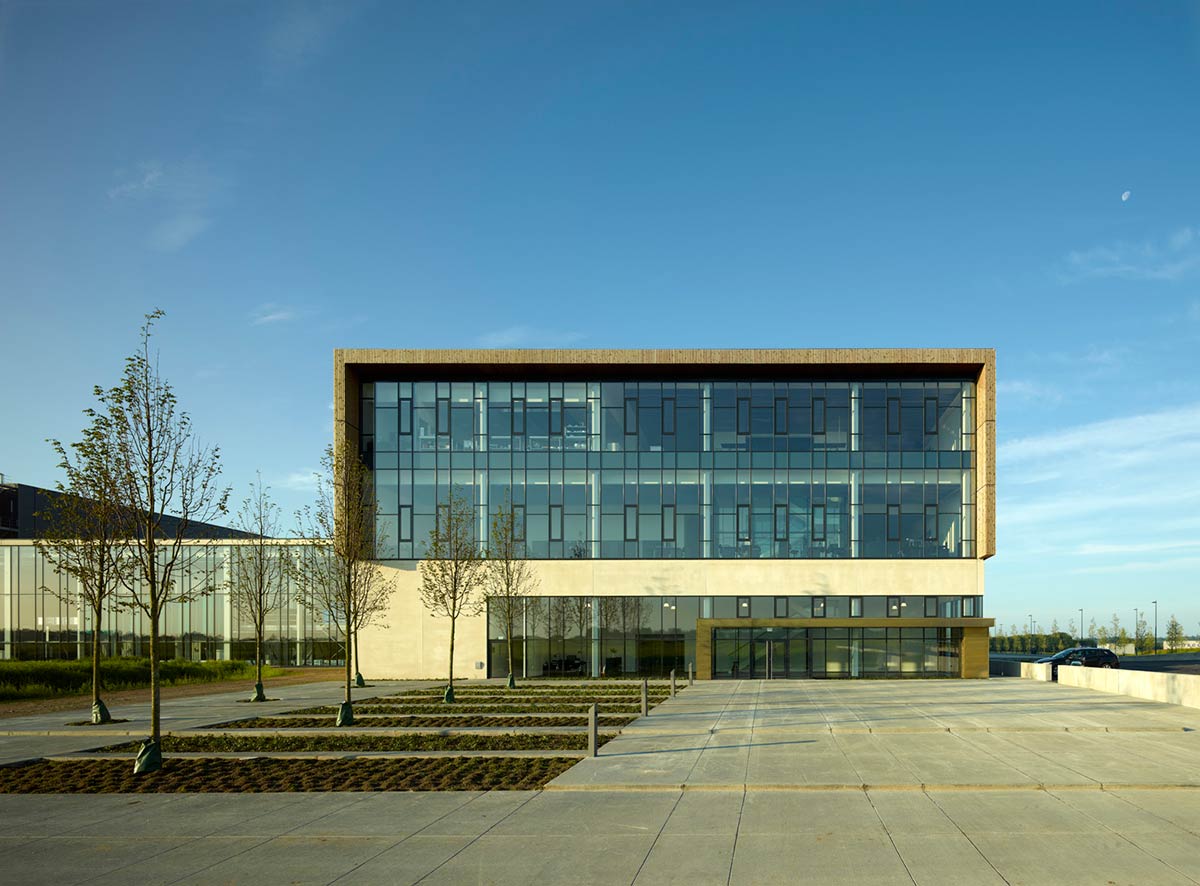 June 3, 2016January 18, 2012
0
The new logistics centre, located on the E45 motorway at Haderslev, supplies all of the clothing company Bestseller’s boutiques, right across Europe.