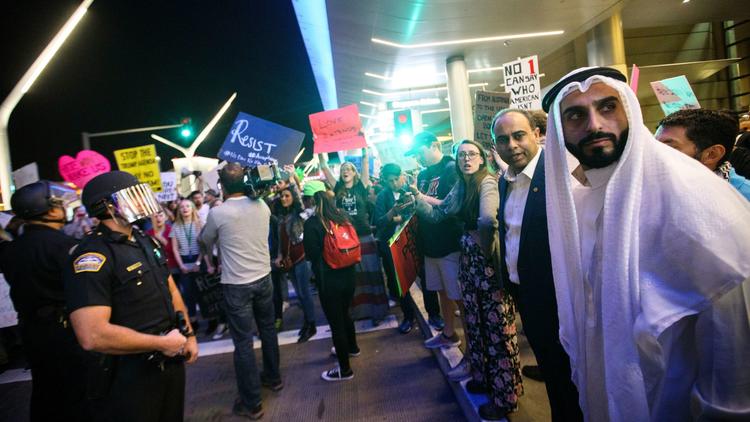 I’ve been writing about the relationship between political protest and the design of cities for more than 20 years, beginning with the senior thesis I produced as a terrifically naive undergraduate studying architectural history and political science in the early 1990s. But I can’t say I’ve ever covered a scene quite like the one that played out last weekend at LAX and other airports across the country.

In response to President Trump’s executive order to suspend the U.S. refugee program and temporarily prohibit entry to citizens of seven predominantly Muslim countries, protesters showed up at Birmingham-Shuttlesworth International Airport in Alabama and at Chicago’s O’Hare. They clogged parts of JFK and SFO as well as terminals in Dallas, Boston, Miami, Washington, D.C., Phoenix, Seattle, Albuquerque, Denver, Missoula, Mont., and Portland, Maine.

But the impact of the airport protests was in certain ways greater, or at least easier to measure. And more focused, since so many migrants travel by air; an immigrant here illegally is nearly as likely to be somebody who bought a plane ticket and overstayed his visa as somebody who came on foot across the border with Mexico. […]

March 29, 2016
0
The clients requested a farmhouse style house constructed of low maintenance materials with optimal thermal efficiency and off the grid.