From the architects:An oasis of peace and tranquility amidst a sea of high-rises. 3deluxe’s Al Noor Island Park is the answer to the global challenge of creating new urban spaces that are both inspiring and thought-provoking, that include electronic media in their design, and that still take their location and its culture seriously. And the result, on Noor Island, is a 21st century landscaped garden where technology meets nature, light meets shade, and the modern meets the traditional in a complex spatial experience.

The 2.4-hectare Island of Light in the middle of the Khalid Lagoon has become a platform where both residents and visitors can engage with the city on intellectual, emotional and physical levels. Initiated by André Heller, the project, which was commissioned by Shurooq, the local state development authority, provided an opportunity for the company to come up with ideas without having to worry about function and yield. 3deluxe transcended the boundaries between the different disciplines, orchestrating a multisensory experience based on a walk-in, tactile sculpture. Here, where architecture, design, flora, sound and graphics overlap, a complexity of design emerges that fully involves viewers, making them part of the overall experience.

The idea of transformation permeates all aspects of the project. How can a forgotten island be transformed into a poetic landscape? And how can nature and architecture, light and water, the hypermodern and the traditional come together in a walk-through installation? The former brownfield at the heart of the city has been transformed into a unique experience. Clear design principles lead to ever-new relationships and form a multisensory whole. Far removed from any form of megalomania, Noor Island is one of the showpieces among the new builds in the Gulf region. 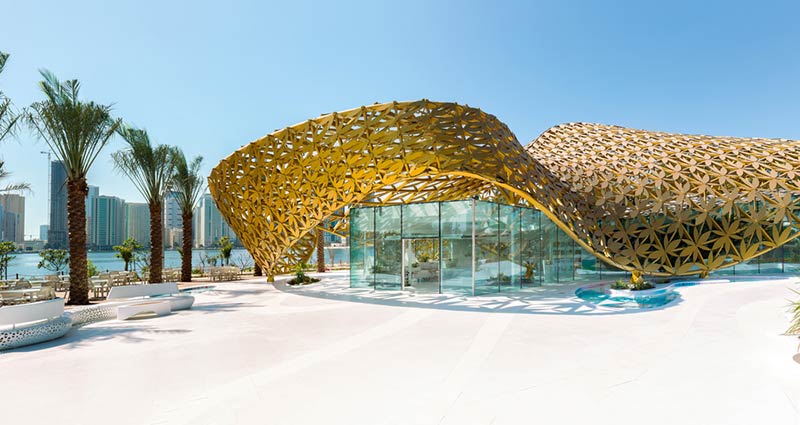 Until quite recently, Al Noor Island could only be reached by boat, but it now boasts a meandering almost 100-metre long fibreglass bridge, seamless, as is its aluminium balustrade. This is not simply a piece of engineering connecting two locations at the shortest point between them, but rather a transitional zone that encapsulates the idea behind the island itself – contemplation. From the entrance, with its projecting shadow roof, visitors follow a winding path that slows them down step by step, making for constantly changing views of the city, lagoon and island.

Several of the Butterfly Pavillion’s approximately 4 000 aluminum petals are forever shimmering through the branches. The viewer’s eye follows the momentum in search of the strongest light – discovering it in the ornamental roof that rises above the butterfly sanctuary itself like a protective curtain, a perforated sheath which, like the classic wind towers in Arab architecture, produces a cooling effect. At almost 15 metres in height, the pavilion, which houses some 500 tropical butterflies, a shop and a café, is almost as high as the tops of the surrounding palms and leafy trees. The pavilion was designed to fit in with the established ecosystem on Noor Island.

The architects at 3deluxe took their inspiration from the chimney effect created by the tapered structure, thereby creating a climatic buffer zone between inside and outside. The intricate casing protects the butterfly biotope, creating shade without excluding the daylight. On the contrary – it is as if the café and the glass insect house are flooded with light. The shadows of flowers make their way across the floor and walls. Images of the ornamental roof blend with the floral patterns of the plants that appear to be growing out of the floor in the tropical house. Architecture merges with nature to create something new, an › archinature ‹, which adopts Arab ornamentation and building traditions just as much as foliage and tendrils.

Tropical butterflies only live for a few weeks. This makes the climatic conditions necessary for them to prosper all the more complicated. The designers at 3deluxe created a biotope set to 26°C with slightly increased humidity at the centre of a 230-square-metre crystalline glass corpus the height of which increases from three and a half to around five and a half metres.

What is natural becomes artificial, what is man-made imitates nature. A landscape made of Krion, a heat-shaped solid surface merges the horizontal with the vertical, tubs of plants with seats.

The Butterfly House illustrates the design principle of › multi­layered atmospheres ‹ – the solid surface is resplendent with patterns and embellishments, walk-in tattoos that echo the ornamental roof. Natural fields appear to be growing directly out of the material itself with its floral pattern which, depending on position, could be the ground or a vertical garden. Along boardwalks visitors make their way through a landscape that suspends conventional boundaries. They find themselves standing in an › all-over ‹ which transforms walls, floor and ceiling into a single entity, a play between layers and the overlapping of shadows, projections, real and printed plants.

The interior of the 150-square-metre Noor Island Café refreshes the senses, with visitors surrounded by perceived and genuine coolness. Organically shaped custom-built furniture, plants and five translucent partitions mark out an island of repose, with folding screens reminiscent of petals creating intimacy.

Coated in liquid glass (a special ultra-transparent resin) and sealed, the colourful ornaments on the floor are particularly striking, as is the elaborate seating and its counterparts, oiled and printed wooden tables, whose graphic designs combine different elements of the island, butterflies and flowers, transforming them into a virtual lace blanket.

At night, the lounge looks like a starry sky, projections from the ceiling lamp cast shadows and engender the play of light on the ceiling, walls and floors. Reflexes penetrate from inside to outside, escaping through the golden roof into the landscaped garden.

Busy lines characterise the plaza surrounding the Butterfly Pavilion. The lines of the floor penetrate the transparent façade, literally guiding visitors into the building. Ceramic tiles, ornamental lines, water basins and sunken Washingtonia palms mark out a place where nature and civilisation come together. Hybrids spring up, something between furniture, plant troughs and works of art, solid surface seating with hand-milled ornamentation.

Like a walk-in flower the Literature Pavilion opens up to the surroundings and its visitors who can engross themselves in the classics or page through the latest new releases. This slightly terraced pavilion is a place for discussions and readings, with petals serving as seats. Four solid surface walls form a sweeping curtain onto which integrated beamers project Arab calligraphy. At its centre, directly beneath the blossom that forms its roof, is the poetry fountain, a fascinating water feature and background for light projections. The Literature Pavilion, an open structure for about 40 visitors with no climatic sheath, is reminiscent of a stylised Bedouin tent where people sit on the floor – cushions and blankets are covered in a fabric specially woven in Germany. It also boasts a real bookshelf and a projection screen for moving pictures plus a contemplative section, an open book in/about nature. The Butterfly and the Poetry Pavilions were designed to complement each other, with the larger pavilion focusing entirely on the physical and sensual world and the smaller one functioning as a place for meditation, for resting in the open air. Displaying a skewed perspective, the flower, with its undulating seating builds a bridge between culture and personal experience.

In the evenings points of light flash up. Abstract stars flare up on the milled and backlit ceiling, making their way across the surface of the pavilion roof when dusk falls.

In the daytime, as its name suggests, Noor Island is a veritable island of light, which is why shade is so very important. The path with its double loop leads visitors beneath tall trees and past special plants, sculptures and biomorphic seating that sounds out one of the island’s central concerns – how natural can the artificial actually be?

We are looking at points of transitional experiences that cannot be placed in one particular category. And thus the way people look at things changes when their eyes focus on strangely shaped trees and carefully arranged succulents and cacti, sculptures and pavilions that transcend the boundaries between nature, horticulture and architecture. As soon as shadows start to play on the ornamental roof over the 3D jungle landscape that is the Butterfly Pavilion, as floral patterns fall over tropical plants, encountering flitting butterflies, all kinds of different levels overlap. The ever-changing interplay between artificial elements and natural growth is the fundamental characteristic of Noor Island.

What appears latent during the daytime comes completely into its own after twilight when the island becomes a stage. The two main attractions, the Butterfly and the Literature Pavilions, spring to life. At this point, 1800 LED lamps take charge of the Butterfly Pavilion. In the course of a half-hour program they test the boundaries of perception, dissolving the architecture in a cloud of light. And the Literature Pavilion is no less impressive. A projector screens a second, fluid level onto the graphics on the fountain. Flowing like a meditative river, star-shaped holes in the roof start to pulsate.