Zaha Hadid’s Tokyo 2022 stadium was declared a national joke then scrapped. Now, its proposed replacements have been revealed – and they look like an egg and a stack of saucers

It was compared to everything from a bike helmet to a potty, and allowed to spiral to almost double its budget, before being unceremoniously scrapped and declared a national embarrassment. Zaha Hadid’s futuristic design for Tokyo’s 2022 Olympic stadium would have swaggered through the historic Meiji Park like a glossy white stormtrooper, breaching local building codes and leaving the city with a costly white elephant. But are the alternative proposals, finally unveiled this week, any better?

After Hadid’s heady vision, the two new designs might seem a bit bargain-basement. One looks like an undercooked fried egg – a wobbly white roof with a gelatinous, albumeny middle. The other looks like a pile of salad plates cleared away before anyone had finished, with bits of lettuce poking out from between the stack of saucers.

But both are significantly slimmer and cheaper than Hadid’s design – around 153bn yen (£835m), as opposed to 252bn yen (£1.3bn) – and they appear to be models of a lighter-weight, low-key approach that would fit better with the parkland setting. Anonymously released as Design A and Design B, but believed to be the work of celebrated Japanese architects Kengo Kuma and Toyo Ito, both are titled Stadium in a Forest and make prominent use of wooden construction, in contrast to Hadid’s hefty steel arches. […] 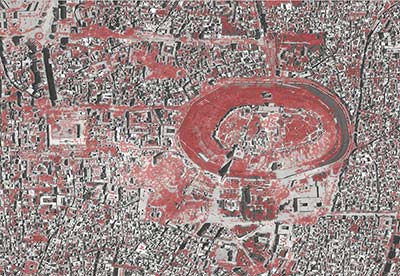 GSAPP announced the creation of an interdisciplinary Center for Spatial Research