The urban extension of Jinzhou, a city of three million inhabitants located less than 500 kilometres north-east of Beijing, has been articulated by the creation of a new large public park of 176 Ha in an area reclaimed from the sea. During a first phase, the park hosts the 2013 Jinzhou World Landscape Art Exposition and once the Expo is closed, the area will become the central park of a new urban development. 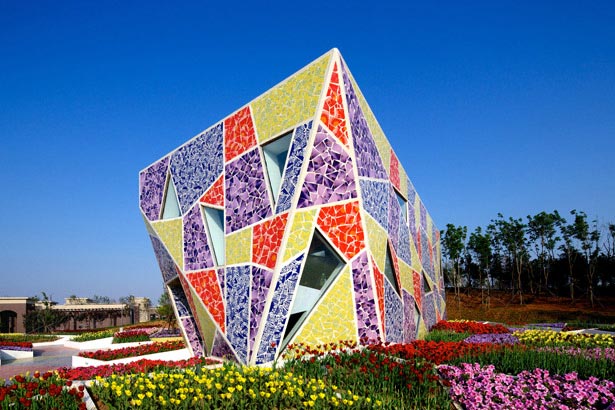 20 international designers have been commissioned to design 20 projects within a comparable circular perimeter in different locations of the park linking the program and the identity of the designs to the cultural background of the designers.

The design of the Expo is based on the paradox that globalization, although it has typically been associated with the destruction of local cultural identity, may also be able to generate some kind of identity. The Mosaic Park project goes beyond that and aims to create a link between citizens and the place, giving a wider meaning to the site.

The project experiments with the concept of cultural hybridization, which is a phenomenon developed during many centuries of commercial and cultural exchange between West and East.

On the one hand, the use of broken local ceramic pieces of different colours for the materialization of the pavement and benches of the park and for the facades of the museum evokes the mosaic tradition that was widespread throughout Europe by the Roman Empire and that has evolved along history till the present day bringing technical solutions such as the trecandís technique used by the Catalan modernist architects. 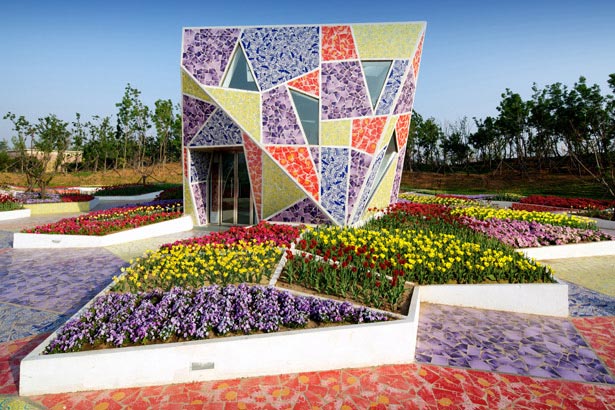 On the other hand, the geometry of the park is inspired by the crackled glaze of the Chinese porcelain developed from the 10th century during the Song Dynasty in the Ru Ware and Ge Ware ceramic pieces. The Mosaic park and the Ceramic Museum remind citizens that the Jinzhou region was once a production area of ceramic and porcelain, although this tradition was lost for centuries, being nowadays forgotten. 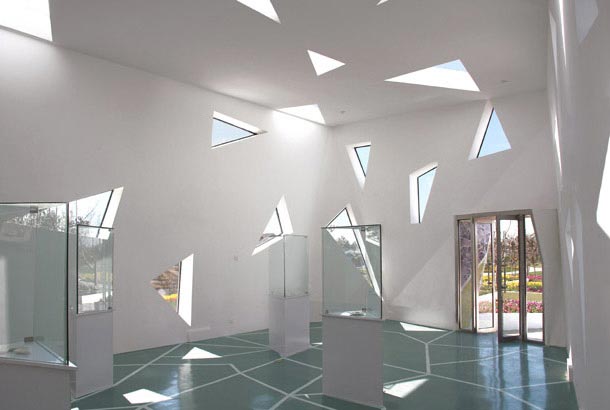 The project represents the paradigm of the contemporary urban park, which is neither a fragment of the natural landscape nor a landscaped piece of the city, but the mix of both of them. Mosaic Park has an hybrid character that combines architecture with landscape, and nature with artifice.

The irregular geometry of the park is spatially unfolded into a crackled three-dimensional topography, where landscape and architecture merge into a continuous surface formed by 884 irregular planes.

Moreover, this geometry is embodied as a polychromatic mosaic formed by combining flowers of four different species and colours with mosaics created with broken pieces of local Chinese pottery. Flowers and ceramic blend into a colourful mosaic that brings nature and local crafts together.

The building geometry of Ceramic Museum is conceived as an extension of the crackled geometry of the park, and it is materialized using the same ceramic tiles used for the pavement of the park, which are combined in the building facade with glazed openings also following irregular patterns.

The polychromatic mosaic formed by vegetal and ceramic surfaces provide geometric and visual unity to the project avoiding the usual separation between hardscape and softscape. Landscape and architecture, Mosaic Park and Ceramic Museum, merge into a single work, at the same time multifaceted and surprising, characterized by its hybrid character and strong plastic content.

Park and museum work as activators of public life in two ways.

On the one hand, Mosaic Park seeks to activate the use of the public space. The iconic nature of the project serves as an attraction that invites visitors to enjoy a multi-sensory experience. The different elements of the park have been dimensioned according to the human scale to provide comfortable spaces for walking, sitting and playing. The park has also been equipped with long benches to create informal places for spontaneous meetings among citizens.

On the other hand, the Ceramic Museum functions as an activator of the cultural and social life of Jinzhou, trying to arouse the visitor’s curiosity about the past of the place, transmitting a lost tradition, and finally creating with a program of exhibitions and public events a new meeting point for the citizens.

The Ceramic Museum is designed as an open structure, where the program evolves over time offering a new social platform to showcase the work of local artists, designers and artisans who work and experiment with the tradition of ceramic and porcelain.

It intends to arouse the interest of citizens about their traditions, but more importantly it seeks to promote local creative industry and contemporary design by building an emblematic and modern space for the exhibition, dissemination, and sale of local handicrafts.

Ultimately, the Ceramic Museum aims not only to energize the public use of the park, but also the local economy and the cultural life of the city, in order to achieve a wider social impact, beyond its primary leisure purpose.