A new trade exhibition and congress center has been completed in Lianyungang, China to a design by architects von Gerkan, Marg and Partners (gmp). The project was subject to an international competition, which was won by gmp. Situated in an urban development area between the city and the sea, the four large exhibition halls surround the congress area in the center of the building. The facades with their vertical incisions create the image of a barcode as a symbol of trade and commerce.

Lianyungang is located in a popular tourist region in China at the Yellow Sea. As the eastern starting point of the new Eurasian Land Bridge between Asia and Europe, the port city has also become an important center for trade and industry. As part of the prospering urban development, the architects von Gerkan, Marg and Partners (gmp) have now completed a new trade exhibition and congress center. Applying a clear functional principle, the four large exhibition halls define the total volume of the building on a footprint area of 200 x 320 meters.

The halls frame the large entrance hall, which runs from east to west and, with its clear orientation and short circulation routes, provides access to all functional areas. Both entrances to the trade exhibition building are recognizable by graded incisions in the building structure – a reference to the “Dougong” principle of traditional Chinese roof construction. This motif is repeated on a smaller scale in the north and south facades at the delivery drives.

The conference center level above the entrance hall can be reached from both access points via wide staircases in the core of the building. Cascading water features between the staircases generate a special atmosphere as a focal point of the exhibition activity to mark a special place for social encounters. The four exhibition halls are based on a 9 x 12 meter grid. The halls benefit not only from natural lighting via skylights, but also from the fact that they are suitable for trade exhibitions, concerts, sports, and festive events.

On the outside, the exhibition building features a natural stone facade of light-colored granite with dynamically distributed vertical incisions structuring the large closed areas. They generate the image of a barcode, thus creating a symbolic reference to the function of the building as a place for trade and commerce. During the day and when illuminated at night, the building unmistakably reflects its function as a trade exhibition center in Lianyungang. 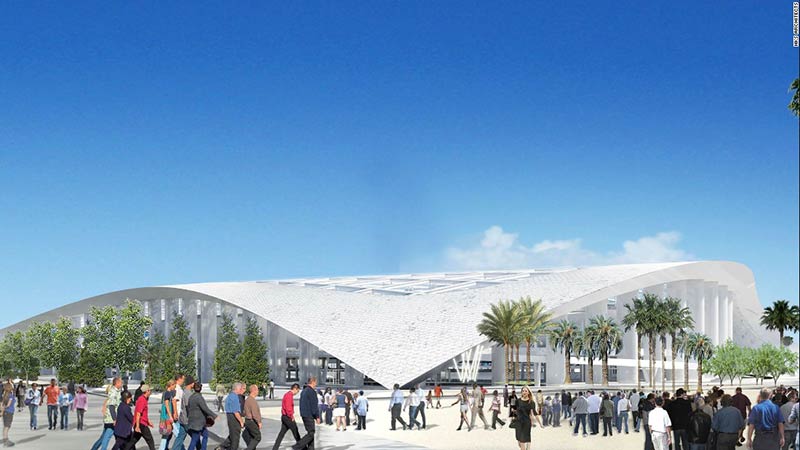