If a business strongly believes in sustainability, it would be setting a terrible example if they were to not follow that path themselves.

The need to do more is what led Creatopy to look for ideas that they could implement which capture their core values. That is when the thought of building an office out of wood with the help of cross-laminated timber came into being. Much to their satisfaction, they were able to reduce their footprint and yet have a beautifully designed workplace.

The company aims to not only preach about sustainability but practice it too. In a world where there is a constant threat to the environment, the idea was to make a change by building something out of the ordinary.

This is the story of how they decided to take a significant step by creating a sustainable office space and, in turn, helped build for the future. 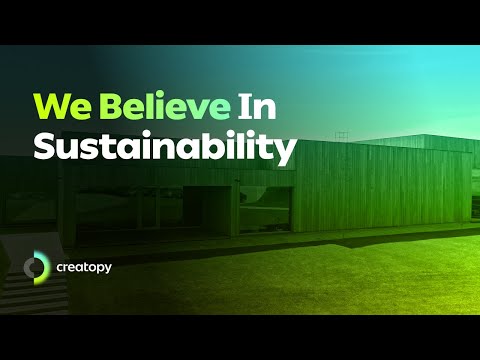 What Lead Them To It?

Back in 2019, Creatopy grew by leaps and bounds. It had started to become challenging to house every employee as the business kept expanding, and they decided to look at a potential workplace change. Gabriel Ciordas, founder and CEO of Creatopy, said that he wanted to work in an environmentally friendly place. So he came up with the idea of creating a sustainable workspace.

In his mind, wood and cross-laminated timber was a great combination not only because it was eco-friendly but also because it stood for what the company believed in. Moreover, it seemed like a good option for the employees since a building like that can help increase employee productivity.

After a few consultations with the project manager and an innovative engineer, they learned about passive houses, and that’s where their journey began. Before moving on to the next steps of their journey, let’s explore the concepts of passive and low-energy houses. 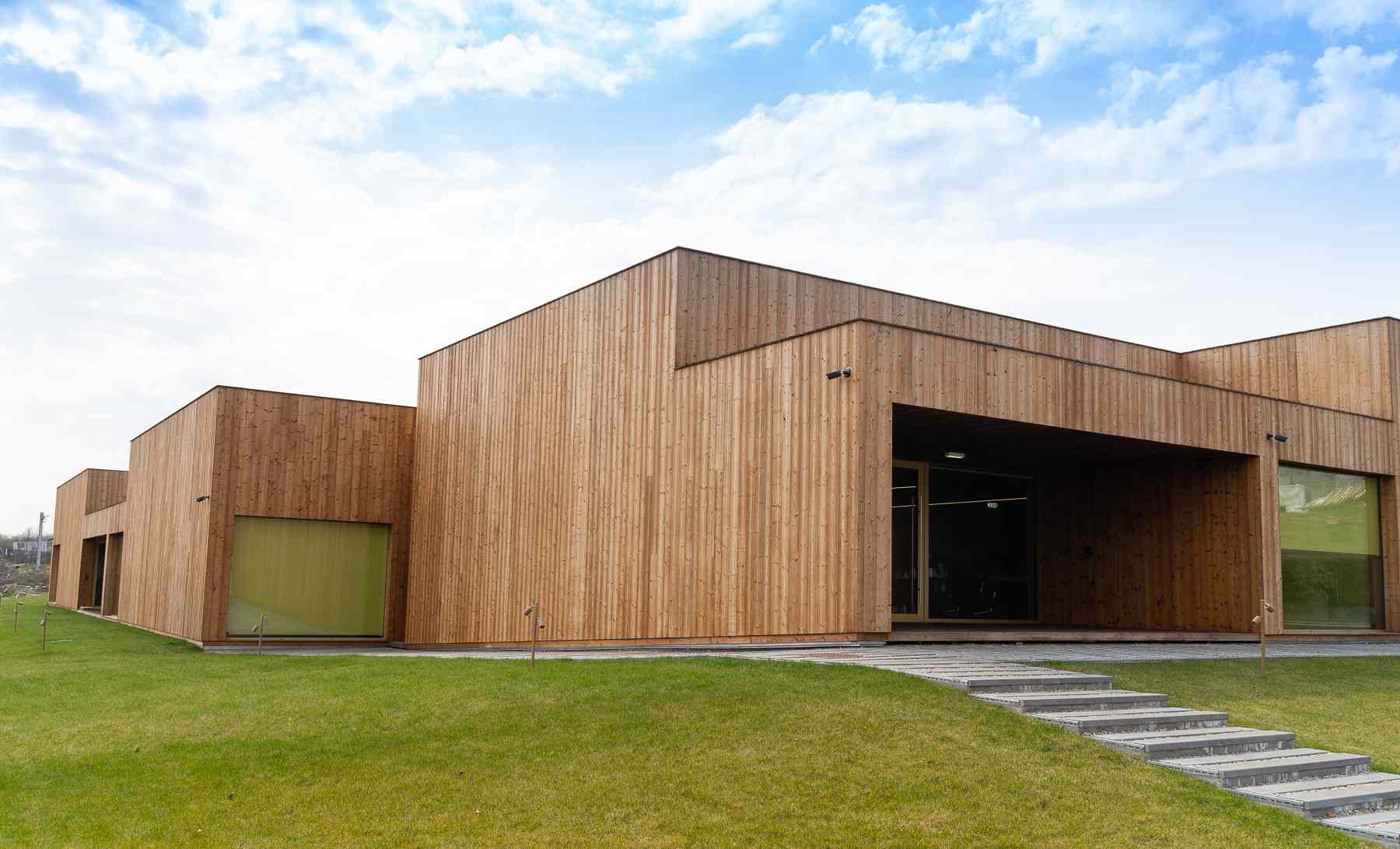 Passive buildings, or “Passivhaus,” is a concept developed in Germany in 1988 by Professors Bo Adamson and Wolfgang Feist. It talks about sustainable designs for constructing buildings. It further elaborates on how one can design a building that consumes 77-84% less energy when it comes to heating than other regular European buildings.

This concept came about during the time when fuel shortage led to a decline in many construction businesses. Due to this, construction companies had to develop new ways of creating buildings that use little to no energy. As people became aware and conscious of environmental issues, the need for eco-friendly buildings increased.

To meet the demand for sustainable buildings, construction companies started building passive houses with cross-laminated timber (CLT). CLT was developed in Austria by researcher Gerhard Schickhofer and is a type of engineered wood. It is made by gluing multiple layers of lumber together.

But, CLT is just one of the preferred materials. There are many others like laminated veneer lumber, nail laminated lumber, and dowel laminated lumber. These passive buildings seem to be gaining traction, especially ones with CLT, as they reduce greenhouse gas emissions and do not cost as much to build. Moreover, they tend to last longer as well.

The Need For Low Energy Buildings

Buildings are an unavoidable thing in the society. However, the construction of these buildings has a massive impact on the environment. The energy consumed in the processes involved to construct a building have a 40% contribution in terms of CO2 emissions.

In fact, many studies have revealed that the impact of building a structure in both developed and developing nations is quite heavy on the environment. Around one-third of the total energy comes directly from these construction processes.

And it is not just the environment that suffers. The constant need for more buildings leads to fast-tracked processes and low-quality materials. Hence, it ends up decreasing the quality of life for certain people. This is why more attention needs to be paid to building a better world for the future.

In order to reduce these emissions, the European Union has recently decided to implement certain legislations such as the NZEB (Nearly Zero Energy Buildings). Other than the NZEB, the EU urged people to take action and make a change by reducing energy consumption, assessing the impact on the environment, and so on.

This is where the need for low-energy buildings came in, and so did the idea for a sustainable workplace. The wood used in the construction was carefully chosen not only because it demanded low energy but also because the construction time is much faster.

Now, when it comes to low energy buildings there are only two reasons to go down that path. However, these reasons are fundamental to the concept.

One of the biggest reasons buildings have high energy consumption is because of the temperature controlling devices inside. People want to be comfortable in their space, and most of the time, heating and cooling consumes massive amounts of energy. Passive houses aim to lower this energy consumption by two-three times without compromising on comfort.

This is especially the case when warming the building since fossil fuels, like methane, are burned to get the job done. This leads to a significant rise in fuel consumption where buildings contribute twice as much as cars and planes put together. With passive houses, the buildings will not have that significant an impact as they will get the chance to use renewable energy instead.

As mentioned above, comfort is not to be compromised while aiming for energy reduction. This is why this aspect is mainly about increasing the comfort level in such buildings without increasing energy use. Since weather changes throughout the year, it can get too cold, too warm, or too humid rapidly and cause mold on the walls.

With passive houses, all of this can be reduced. According to engineer Marius Soflete from Inginerie Creativa, passive houses have a thermal layer or “skin/shell” to help control inside temperature. Because of this layer, warm air stays inside the building, and cold air does not enter at an alarming rate. So the temperature remains stable, and there is less chance of mold formation.

This is highly beneficial for people working long hours in the office since inconsistency in temperatures can impact work performance. With passive housing, the inside temperature remains comfortable and the employees stay productive. That is another reason why they chose to opt for this.

Once the concept of passive houses and why they were the perfect option was clear , it was just a matter of getting the right team together. The next step in the process was to find a team of architects who could make this crazy dream into a reality. No doubt, there were a few hurdles and a ton of assessments, but it finally happened.

Since there was a slope in the land, the building had to include three platforms that created level differences. However, this was done to naturally adapt to the land while giving the design a bit of an edge. But that’s not all; there are a ton of reasons why their new sustainable home stands out from classic buildings.

Interestingly, this building is one of the most significant CLT buildings and the only low-energy certified office in Romania and Eastern Europe. The entire space is about 2400 square meters. Also, it is amazing that they used close to 2000 cubic meters of recycled foam glass in the foundation. The construction began in March 2019 and came to completion in July 2019.

Facts About The Structure

This building is ideal for a mid to large-sized office since it can accommodate up to 245 people. While building this, they used a total of 890 cubic meters of wood. To make it easier to understand, 890 cubic meters of wood is about 490 full-grown trees. Since it can accommodate 245 people total, they used about two trees per person.

The building also has about 819 prefab panels that were designed with utmost precision. These were made in Austria within four days and then transported to Romania. It took all of 25 trucks to transport those many panels.

As mentioned earlier, using CLT means faster production, which was proven to be correct as for the new office. Assembly of the CLT structure took a total of 44 days and ten people. It started in March, and by July, the whole building was constructed and ready to use. This makes it 2.5 times faster than other constructions.

How This Is Helping

Another benefit of not using bricks and concrete is that they consumed close to 7 times less energy. This was possible only because they opted for a wooden structure.

While talking about how the future would look like now that passive and low-energy housing is gaining traction, Gabriel said that building a sustainable office like this was a way of trying to inspire other offices.

He also adds that choosing sustainability is something that needs to be done at the earliest instead of prioritizing short-term goals. Since buildings will exist for a long time, they need to benefit the future generations.

In 2009, the group in the G8 meeting decided there was a need to reduce emissions by 80% globally. This was set as a target to be achieved by 2050. But unfortunately, since then, the process of constructing more buildings has contributed significantly in the increase of emissions. This is why it is essential to adopt a new way of life by shifting to sustainable options.

It is evident that Creatopy advocates strongly for passive houses. It acts as a very effective alternative to the problems of today. Not only does it save the environment, but it takes much less time to construct with. In a world with many problems revolving around non-renewable resources, this seems like a good solution that ensures renewable resources are utilized instead.

It is imperative to take advantage of the technology available to create something better. A certain amount of consideration has to come into play for future generations. That is why every person’s role in protecting the environment is crucial, provided it is done in unison.

The Team Behind The Project

All of this would not have been possible without the generous contribution of time and effort by certain people. They have worked day and night to ensure a better tomorrow!