Dancing about architecture at Hearn Generating Station for Unsound 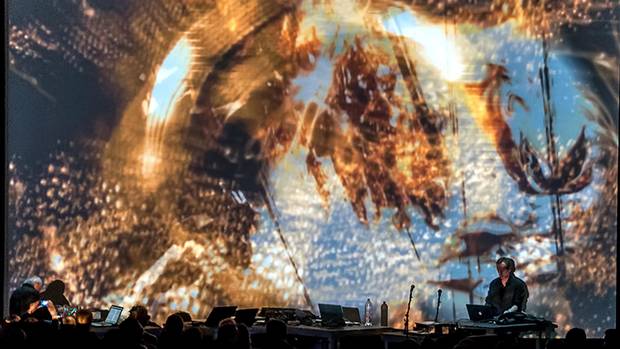 The Hearn Generating Station is one of the great architectural fantasies of Canada. An abandoned power plant in desolate industrial lands next to downtown Toronto, it is so massive and so forbidding, it attracts the producers of blockbuster movies. It has repeatedly been the setting for explosive battles between robots and aliens. It’s all girders and catwalks and concrete pillars. Its open interior spaces tower several storeys high; its turbine hall is 300 metres long. It is postindustrial, postapocalyptic heaven. The first thing you think of when you step inside is that you would love to see Robocop or the Terminator fall three storeys into a vat of molten steel here. The second thing you think is: this could be the coolest music club anywhere.

And it will become that for two evenings next week, June 19 and 20, when, as a part of the Luminato arts festival, it will be taken over by the Unsound Festival, a travelling show of new, experimental, ambient and electronic music from around the world. The combination of setting and sound promises to be dramatic, to say the least: it combines ethereal soundscapes with spectacular visual ones, it juxtaposes cerebral art music with performers of harsh industrial drones. There will even be some dancing. This will be an event to cement the affinities between dance-club culture and the artistic avant-garde – affinities that have always been palpable.

Unsound originated in Krakow, Poland, the brainchild of Mat Schulz and Malgorzata Plysa. The festival has always been what Schulz calls “amorphous.” It is also nomadic: It has occurred in New York, London and Adelaide, each time in a unique site. Schulz, originally from Wagga Wagga, Australia, told me over the phone from Krakow, “We have had installations in a synagogue, a gothic church, a postindustrial space, an old communist hotel. […]