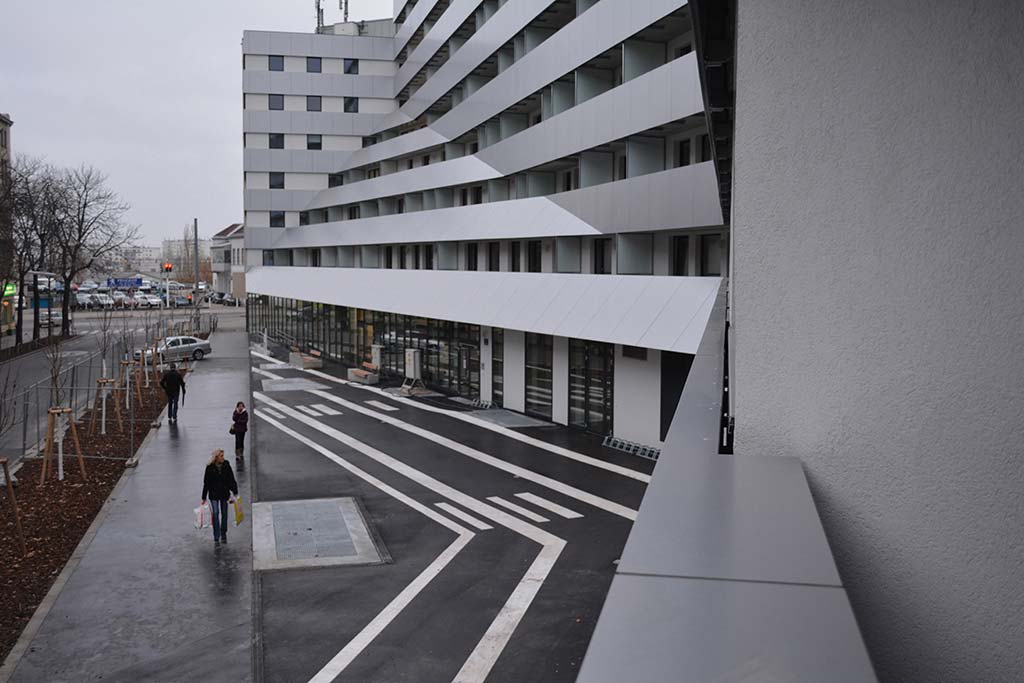 “stadt-land-schafft” was the title of the winning project in the Europan 6 competition in 2001. After twelve years of development and construction, the building is now set to be handed over to its occupants. It has turned out to be more than a building! It is a man-made mountain, an alternative to block perimeter development, with a Piranesque, three-dimensional urban landscape within. 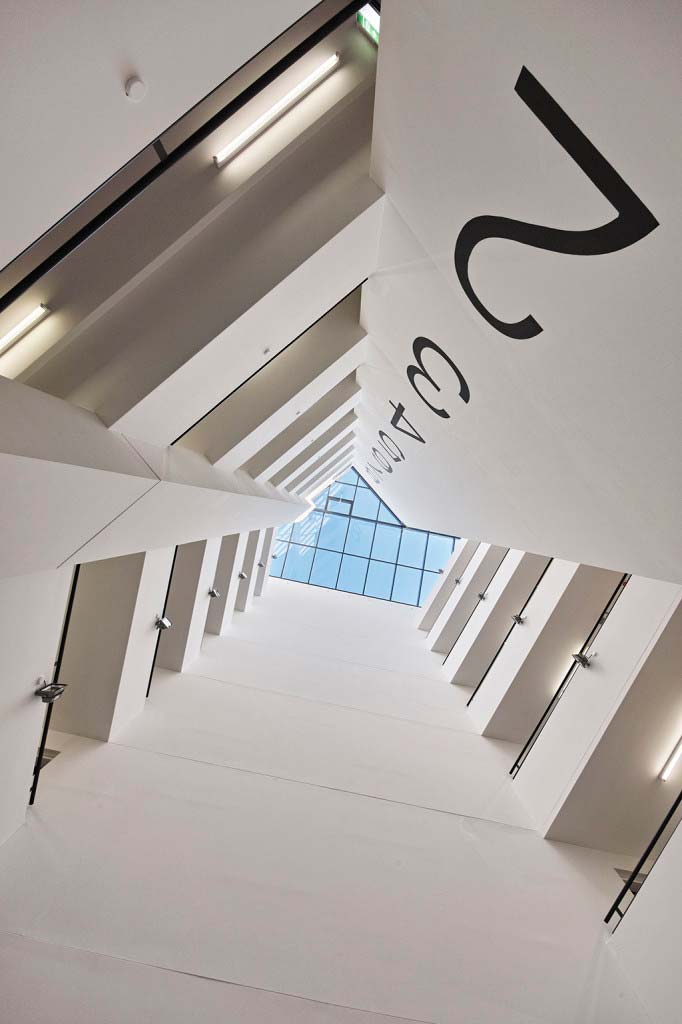 Based on applied spatial geometry and objective criteria, the result is a maximum cubage which incorporates neighbourhood interests (sun, public space, etc.) with pinpoint precision for the location.

According to the original specifications of the competition, the mountain-like building was to be used for different purposes: flats with terraces on the crust, with supermarkets, specialist stores, and general shops inside. With the aid of the structural zoning system, the project evolved into an unusual development plan in 2007 which precisely described the mountain in terms of its expanse and limited the usable floor space within. 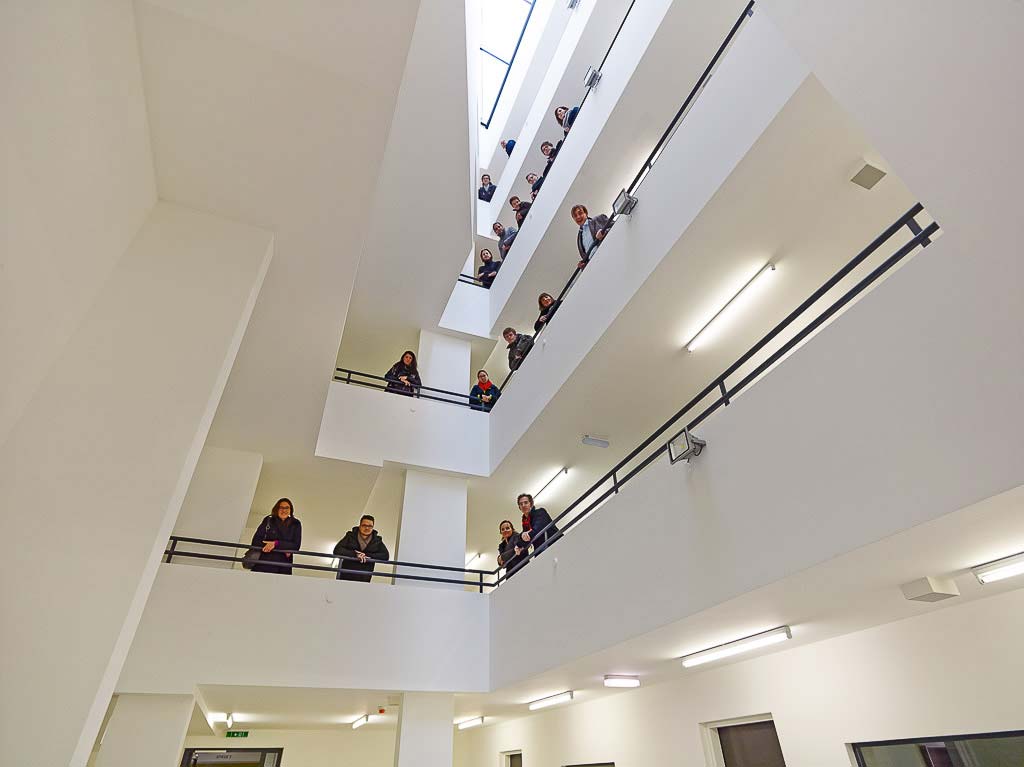 The commercial areas were converted into residential areas in the course of planning: today there is a nursery school, a hostel, and numerous common areas (shared kitchen, conservatories, playing areas, chess terrace, etc.) woven into the inner atrium, which acts as a miniature town, providing direct access to the 200 flats. 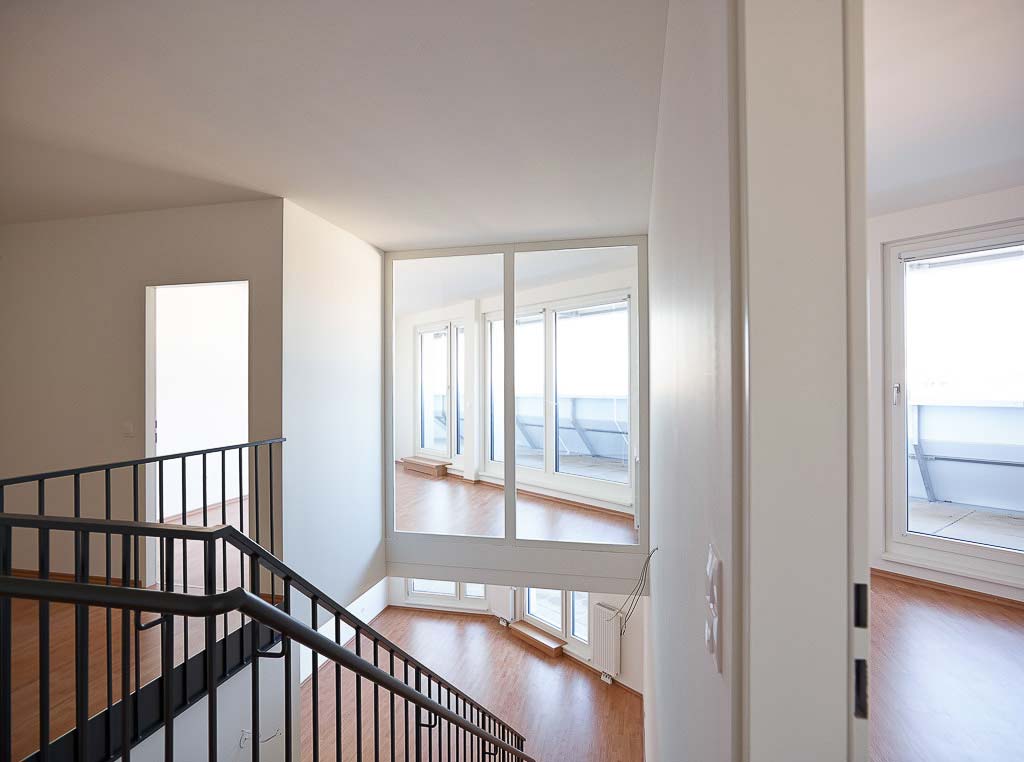 The flats themselves are highly diversified in terms of organisation: some arranged on several storeys, some with light scoops, all with windows giving on to the atrium and a run-around terrace on the outside.

The competition task involved creating a basis for rezoning a site in Simmering. The architects had already explored this abstract preliminary stage of architectural planning and its possible improvement in practice in a previous project (Augarten, 1999), developing a simple, universally applicable method of visualising the existing conditions on the particular site (e.g. sunlight, local wind directions or visual links) in three dimensions and thus creating a space of possibility for future developments which permits flexible interpretation. 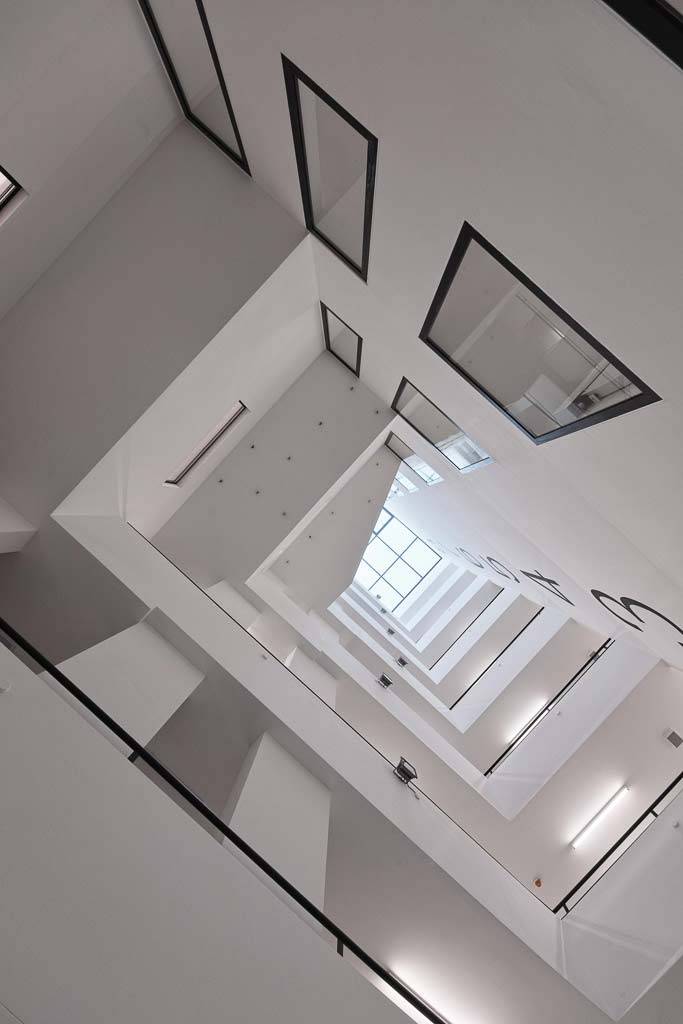 The mountain-like volume of the building resulting from the competition was well suited to house the intended mixture of uses, which was in a sense intended to combine the Alt Erlaa residential development with Shopping City Süd at one location.

The structural zoning system of Vienna’s building regulations made it possible to adopt the calculated cubage with defined limits of use almost 1:1 into the development plan. Unlike block perimeter development, the volume of this building is concentrated in the middle of the site so as to afford the lower-level flats a good prospect too and to span out spaces which communicate with the neighbouring developments. 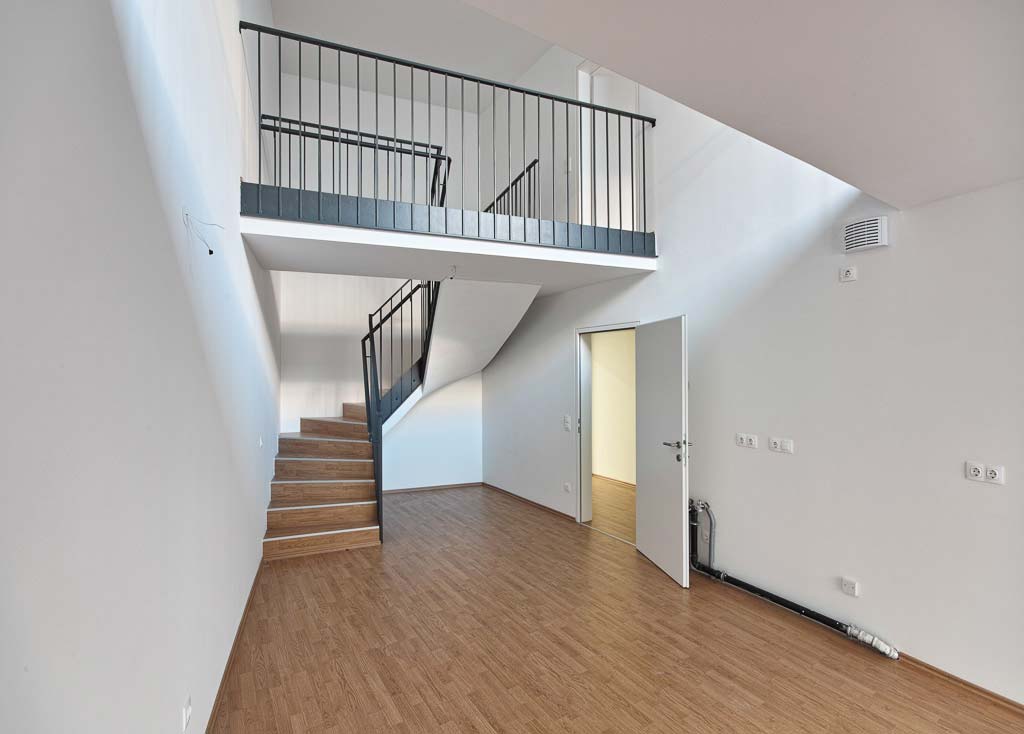 This voluntary departure from the building line, combined with the pavement, created a square containing all points of access. At the very start of the project development process, it became clear that there should be a stronger emphasis on residential use – a challenge for the typology, that ultimately made the mountain slimmer. Currently, a nursery school, a hostel for temporary accommodation, studios for living and work, and 200 flats are being realised. 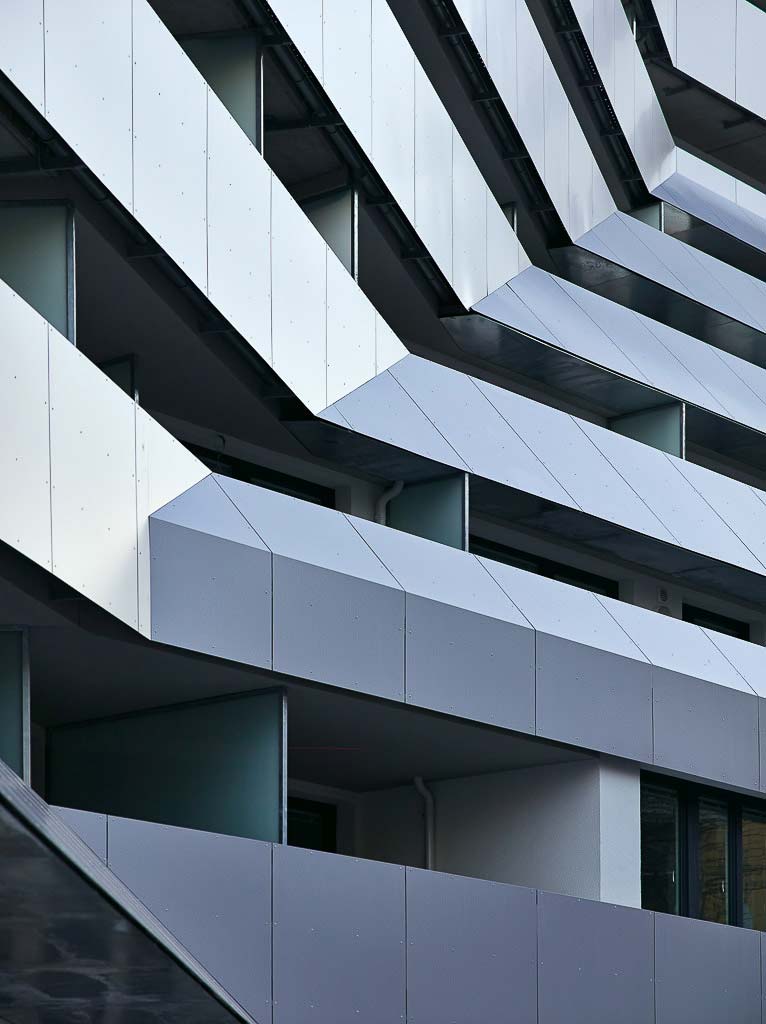 An important factor regarding identification of the residents are the spacious circulation areas with natural lighting, some extending over four storeys, with large atria running through the building as internal roadways.

The interior façades and kitchen windows in all flats face these atria, that every resident crosses upon entering and leaving the building. Spaces accessible to all residents – like the roof terrace – are situated here: ancillary rooms (pram and bicycle rooms, storage rooms and laundry-room), multipurpose/exercise room, children’s/youth play/game room, cinema, conservatory, shared kitchen with adjoining seating area, library/learning room, and niches/space situations with a wide range of potential uses. 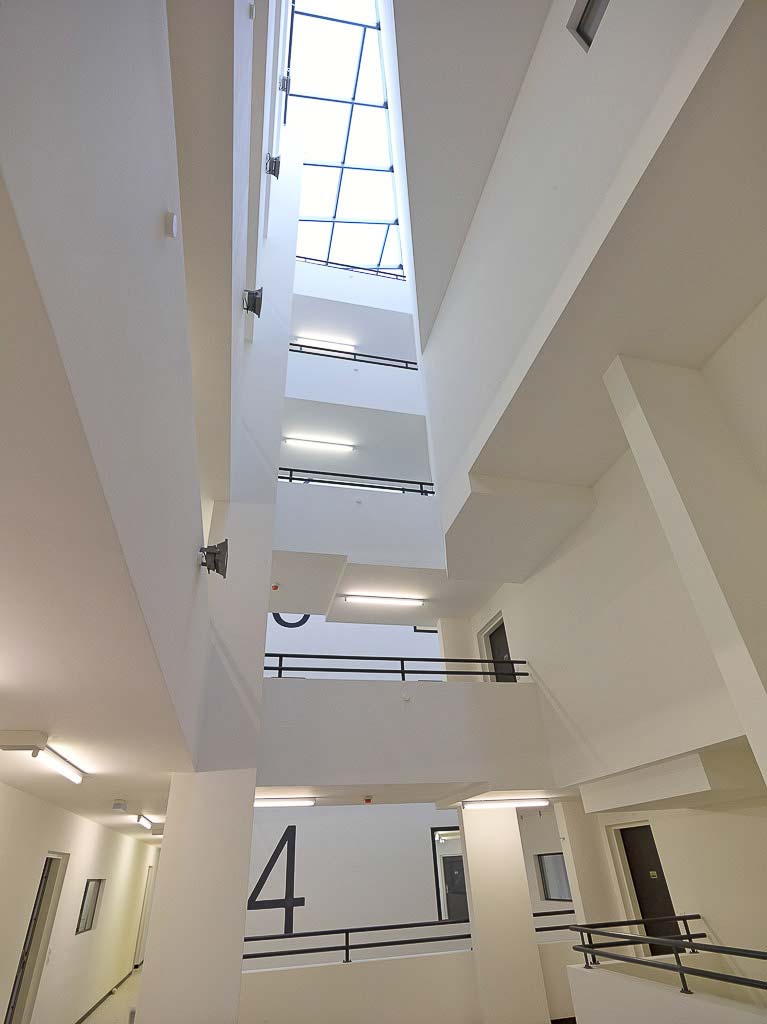 The flats, facing in all directions, mostly face one side but are characterised by a wide range of different layouts to make up for this. The run-around silver balcony strips demonstrate the homogeneity of the building towards the outside.

The compact, low building with its small outside area and the range of large private open spaces defined by the form are approaches to creating new, sustainable models in the city which will render the traditional single-family house obsolete.

The innovative design method generates innovative architecture. At the same time, the residential hill type in Vienna is set in a historical continuity when one recalls the tried-and-tested, much-acclaimed terraced houses built by the architect Harry Glück and the studies of Hermann Czech.