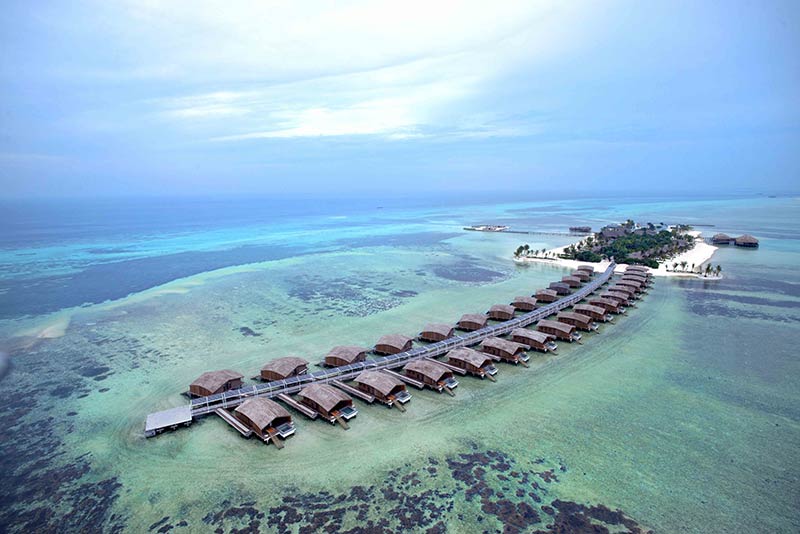 The world’s first entirely solar powered five-star resort is now open to guests. The Maldives has the lowest average ground level of any nation, which makes for some of the world’s most beautiful beaches. It also makes Maldivians extremely sensitive to the effects of rising sea levels. The burden of global CO2 reduction lies primarily with a few large economies, but achieving carbon neutrality on this small island should be an inspiration for sustainable development in larger countries. There may be no better place in the world to showcase the future of sustainable resorts than the luxurious tropical setting of Finolhu Villas by Club Med. 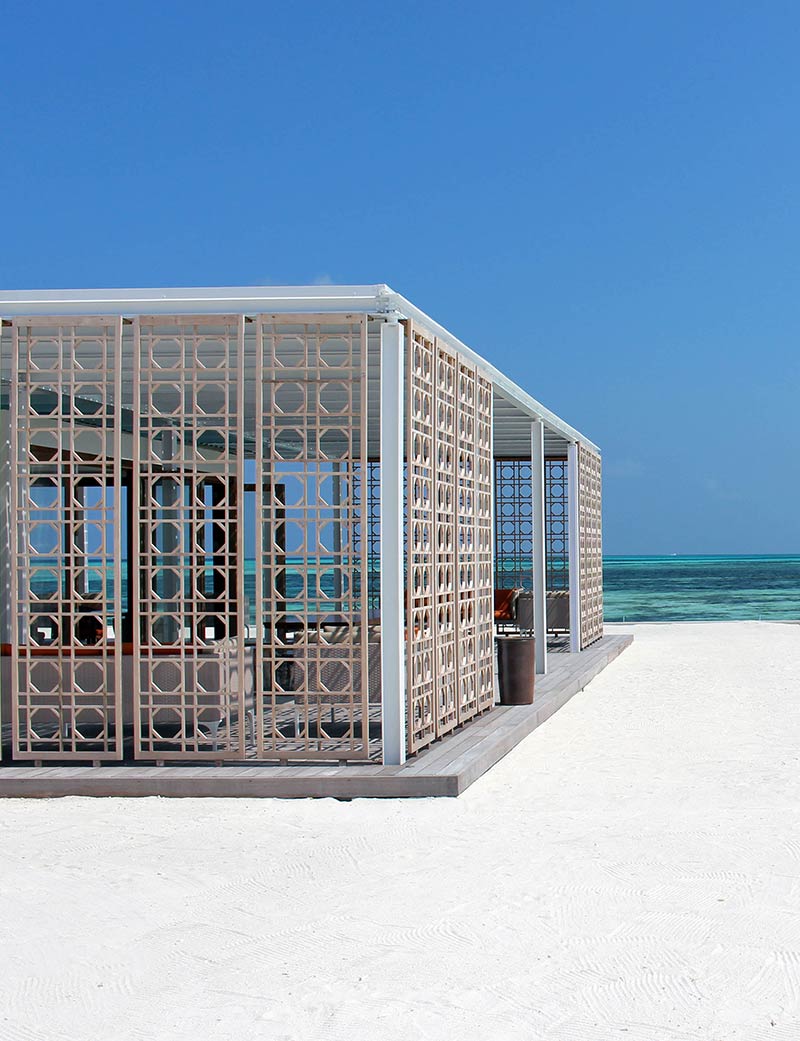 The resort opened to the public with a three-day festival of special events, beginning with presentations by Chairman and CEO of Club Med Henri Giscard d’Estang and CEO of Club Med South East Asia Pacific Heidi Kunkel. At the speech given at the ceremony, the owner, the initiator of “100% solar-powered” project, and Maldivian hospitality pioneer Champa Hussain Afeef, recalled how the island was “a simple sandbank with coconut trees when we first saw it.” With this project, he said, “We wanted to do something different and sustainable. I believe renewable energy is not just the future for tourism, but for all other industries as well.” 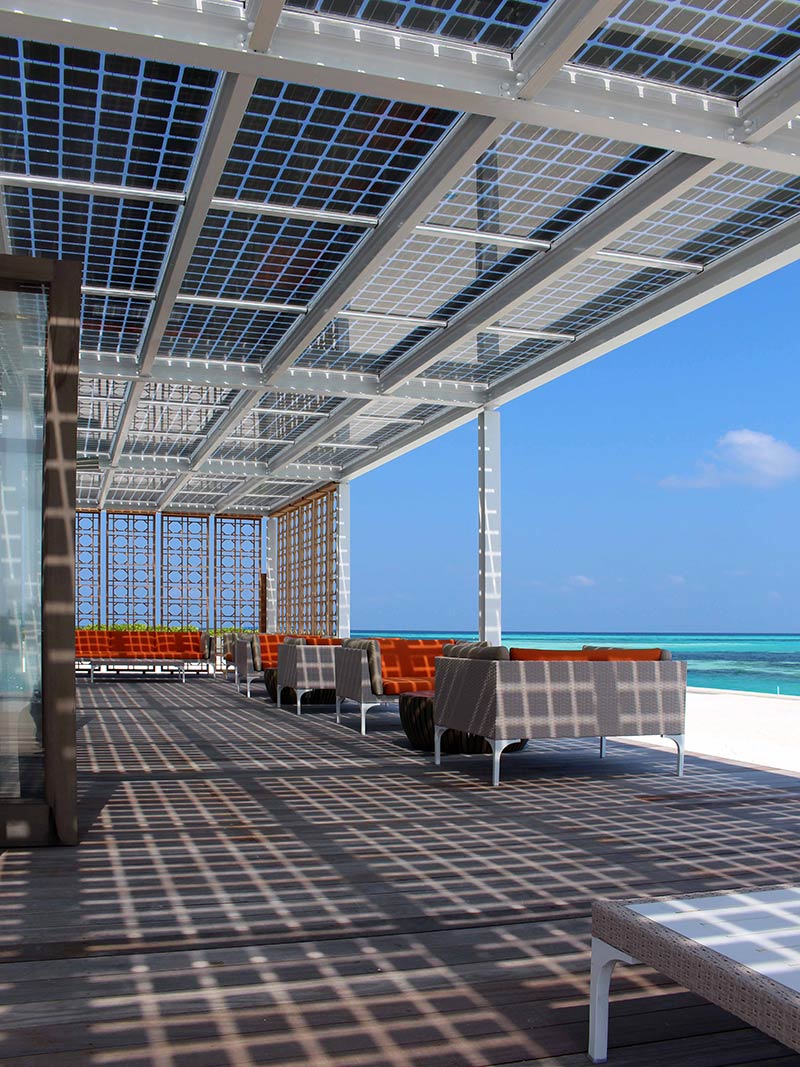 Designed by New York based architectural firm Yuji Yamazaki Architecture PLLC in partnership with local firm Design 2000 and Italian engineering firm T&D Water Technologies, the island resort will accommodate about 100 guests year round. Guests can relax and enjoy the equatorial sun, and they can also see how solar energy is collected to operate the island. The island is approximately 13 acres with interior space of 123,000 sq. ft. It’s been determined that 67,000 sq ft. of solar panels, with a storage battery generating 1 mega watt on an average sunny day, is sufficient to serve 100 guests and 100 staff occupying the resort at any time. The solar panels are visible to the guests throughout the island and are integrated into all aspects of the resort’s design as an architectural embellishment. 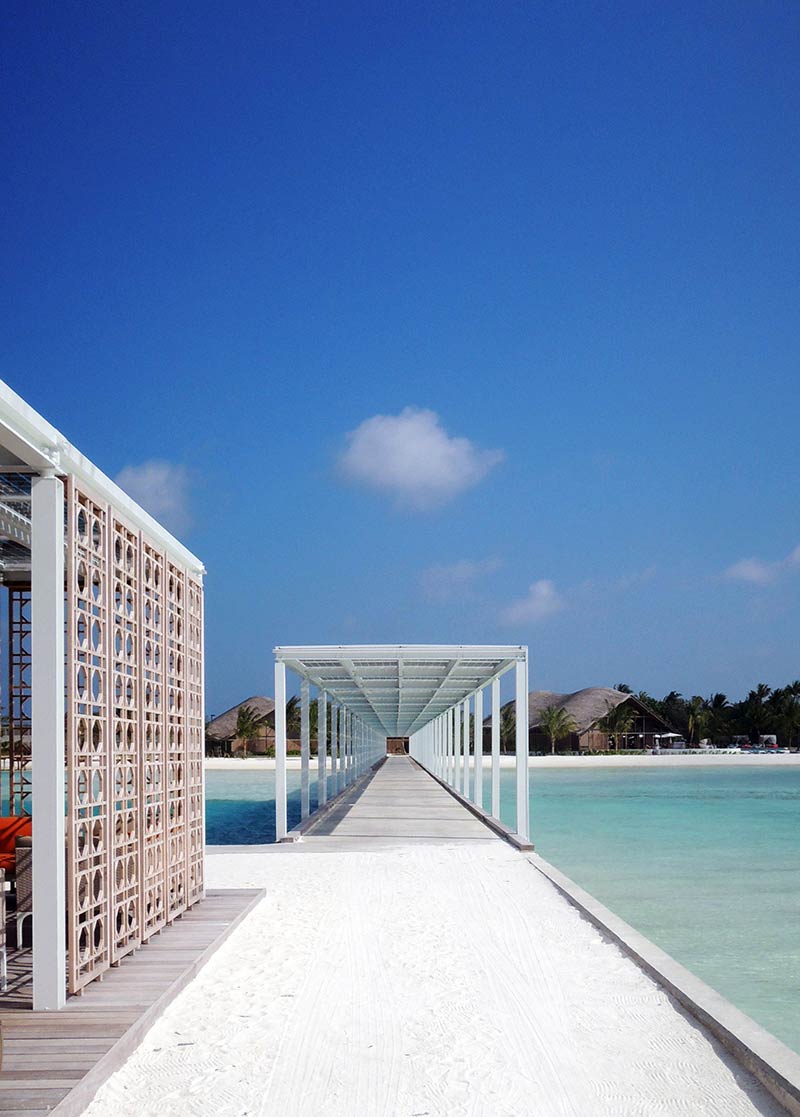 The initial investment in the solar system (including the batteries and monitoring system) will be paid off in seven to eight years by eliminating the need to import diesel fuel. This should be a fantastic example for other countries with similar climates. An about two hundred person occupying a 13-acre island is similar to the population density of Miami. In theory, if Miami could delegate just 12% of their land or rooftops to solar panels, the largest city in the “Sunshine State” could be powered entirely by the sun.

Although the solar system generates a surplus of electricity, all guest rooms are designed to minimize energy consumption. The typical guest villa is oriented with operable windows strategically placed, maximizing air ventilation with natural Maldivian wind. Wooden shade screens on two sides of each villa cut off direct sun before reaching the exterior walls and patio, keeping interior temperatures low. The majority of guests typically do not turn on air conditioning during their stay despite the hot and humid climate. 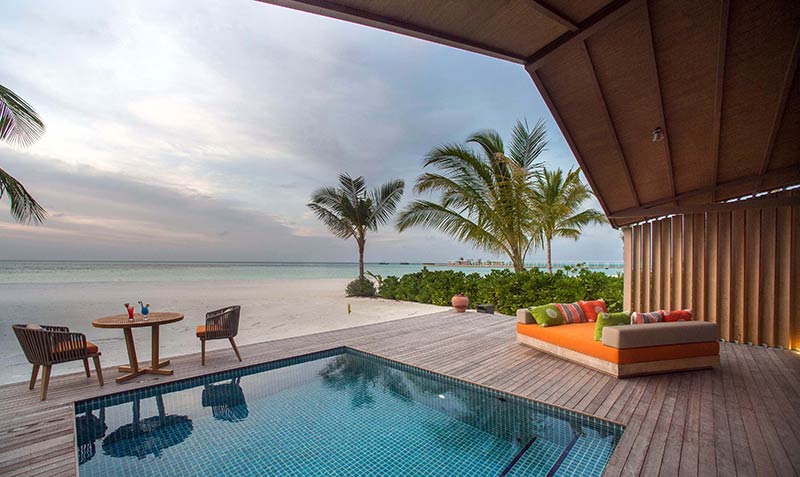 According to Yuji Yamazaki, AIA, and the principal architect: “All resorts in the Maldives are accessed by boats or seaplanes. It is unique to this county that you first see any building in the distance from the sea or sky, which gives the visitors a stunning impression of the entirety of architecture on the island.” Born in Tokyo and educated in the US, Yamazaki described Male’ Atoll as “a architect’s dream come true.” Yamazaki intended for the shape of the buildings to suit the uniqueness of the place. 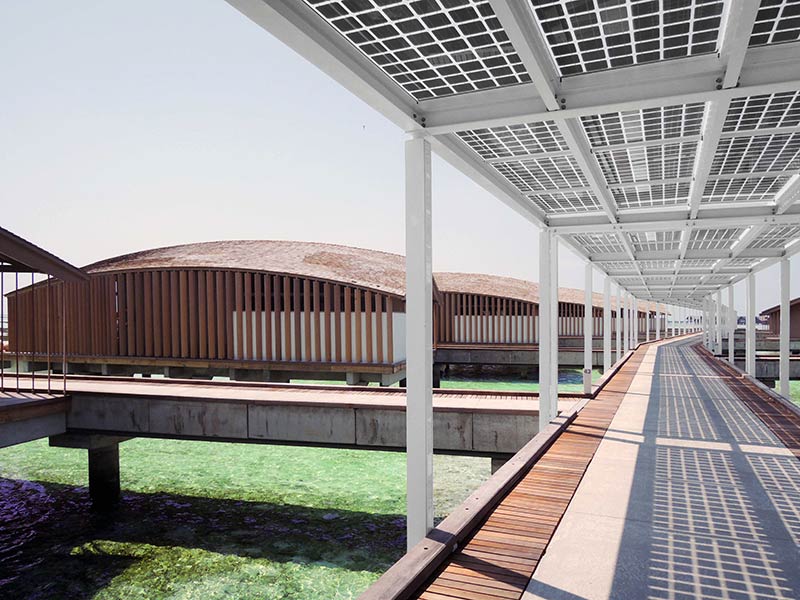 For Finolhu Villas, YYA uses gentle curves for all roofs to derive a sense of the organisms that inhabit the tropical environment. “Banana leaf, hermit crab, ocean wave, sea turtle—those are all good reference points that guests have pointed out to me after they have observed the resort. The design of the surroundings takes inspiration from what was there before. It is impossible to recreate nature, but we tried our best. The island had beautiful beaches, littoral plantings, coconut groves and interior forests. We kept this basic structure, and also kept the native plant palette such as Sea Lettuce, Iron Wood, Coconut Palm, Beach Hibiscus and Screwpine. When you have a beautiful and unique site like this, you want to just preserve it. Hopefully our new landscape will seamlessly blend with what was there before. Ultimately that’s the main thing that people come to enjoy.”