Gamble House: the abode that saw Greene and Greene go Back to the Future 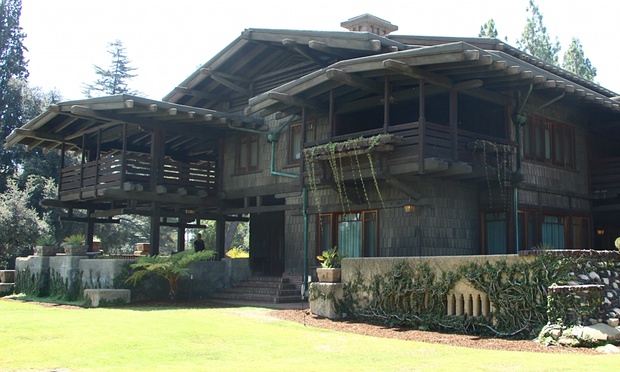 Known as the oldest highway in the US, the 110 North out of downtown Los Angeles comes to an end in the city of South Pasadena. Orange Grove Boulevard is your first exit, a shady tree-lined thoroughfare that used to be called Millionaire’s Row in the Victorian era. It features a progression of styles from Queen Anne and American Foursquare in the 1880s to American Craftsmen and Prairie style homes only 10 years later.

Further north, away from more ostentatious abodes, such as the Wrigley Italian Renaissance mansion, the Gamble house, built and furnished for a comparatively modest $80,000 by Greene and Greene in 1908, is considered a masterpiece of Craft-style architecture. Movie fans might recognize the low-pitched rooflines, deep eaves and handcrafted wood from Doc Brown’s house in Back to the Future, which was screened there last month for a fan event. This month it’s Upstairs Downstairs, a two-week only docent-led tour of the, servants’ quarters and kitchen, as well as the basement laundry and coal rooms, in addition to the rest of the bedrooms and family rooms.

Heir to the Proctor & Gamble soap and candle company in Ohio, David Gamble and his wife Mary decided to build a winter home in Pasadena, where fellow Cincinnatians, architects Charles and Henry Greene had their practice. Devotees of Japanese style, an exotic craze that swept throughout the west at the end of the century, Greene and Greene were a perfect fit for the Gambles, who traveled extensively in the Far East. Not only is Japanese style evident in the use of wood, joinery and emphasis on structure, but most obviously in the front door, with its stained-glass mural of a Japanese black pine. Mahogany and teak inlaid walls, furniture, fixtures and rugs were all custom made for the house, ranging from the Baldwin piano in the living room to the single beds in the master bedroom. […]