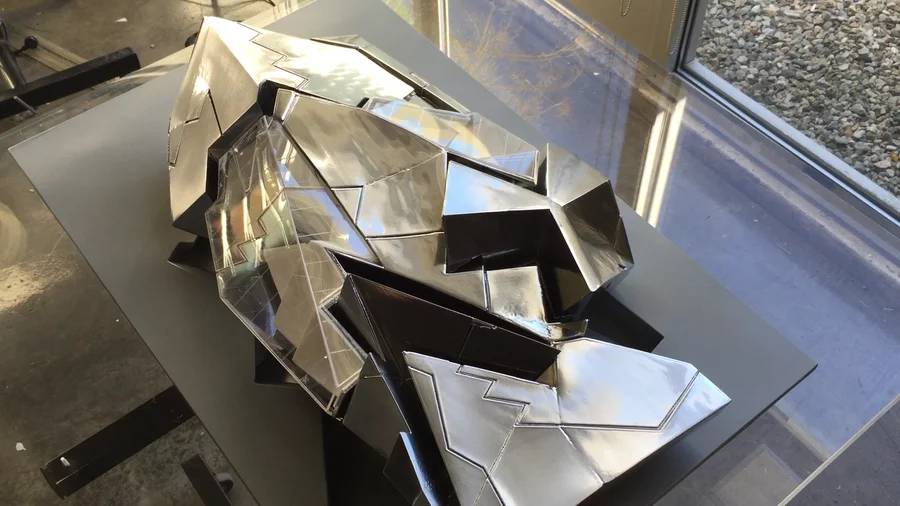 “Heidegger’s tools can break, meaning that something in them can cause surprise” -Graham Harman

This house is part of our continued work on the container/ contained relation in architecture, and in particular, what happens when that relation is broken.

In this project, we avoid subdividing mass into compartments such as rooms and corridors, instead focusing on misfit spatial figures that are incongruous with, and even breach their container. Figures exist half-inside and half-outside, unsettling the notion of containment altogether. What is it to be contained only partially by something else? Can something be discrete and also be part of something else? What is the status of an interior space that has slipped to the exterior? How do you draw a plan of that?

These are the questions that provoke and vex us in this project. One discovery is that silhouette, normally associated with an object’s outermost edge, can travel into an object’s interior. In particular, the stepping of low-res ziggurat figures appears at one moment to define the container, and the next, its inner formations. The use of transparent surfaces at the moment of penetration occasionally allows glimpses of this wandering silhouette.

In order to confound the container/ contained relation, a technique of glance-cutting is employed. Figures and their container are sliced at the same time, producing a new compound object out of what was a non-whole set of objects. Nevertheless, strange joints resulting from the slicing operation interfere with the legibility of the house as a unified entity. Further, reflections of inner objects are projected onto the container, creating surface features that leap between parts, further enhancing the illusion of unity where there is none.

An inner liner is used to carve out inhabitable areas in the house, connecting visibly discrete parts together in sneaky ways on the interior. In this way, the strong “part-ness” of the house is crossed with a weak form of continuity, offering a possible alternative to contemporary models of part-to-whole that favor total unity.

March 13, 2017
0
Meet the husband and wife team restoring the grounds of a twelfth-century stone keep