Housing and the City – Love vs. Hope | Daniel Solomon

And yet, often we do not see the difference.

One happens to glance at Rome a day and on Amsterdam another, proceeds towards Copenhagen and returns home to Paris, Berlin, Munich, Cologne, Prague, Budapest or Bucharest and wonders, what was the difference between these place, what I loved about one and disliked about the other, why Prague felt similar to Bucharest but better and yet Bucharest is renown as the “little Paris”?!

Why Berlin feels beautiful yet distressed while Rome slides into one’s heart in an instant?!

Have you ever wondered what made you feel at home in a completely new city?

Have you tried to understand a city and the urban fabric around you?

If you ever shown interest in housing and the city, this books is for you, whether you are a professional; an urban planner, an architect, designer or an avid travel, this book will amaze you.

Daniel Solomon will amaze you.

Housing is a matter of great urgency around the world. In cities that drive technological change and staggering wealth, there is a fierce struggle over two different models of creating affordable living conditions for working people, the poor, and immigrants. In this thoughtful book—part history lesson, part memoir, part essay—award-winning architect Daniel Solomon explores the successes and failures of cities such as San Francisco, Paris, and Rome in a century-long battle between the so- called City of Hope, which sought to replace traditional urban fabric with more rational housing patterns, and the City of Love—love of the city’s layered history and respect for its intricate social fabric. Solomon demonstrates how the City of Hope has repeatedly failed its social purpose and driven a hot wedge into society’s latent divisions, while the City of Love has succeeded as the portal of assimilation and social harmony. Interwoven with stories from Solomon’s own fifty-year career, this engaging book adds a powerful new voice to the housing discussion. It will appeal to planners, architects, and lay people interested in cities as places of continuity, resilience, and refuge. 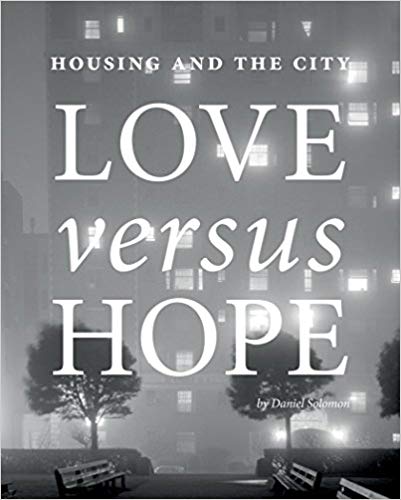 DANIEL SOLOMON is an architect and urban designer whose housing, mixed-use buildings, and urban neighborhoods have received more than 100 design awards. He is professor emeritus at UC Berkeley, and was cofounder of the Congress for the New Urbanism and coauthor of its charter. He is the author of four previous books: (Re)Building, Global City Blues, Cosmopolis, and Bedside Essays for Lovers (of Cities). He is partner in Mithun/Solomon, San Francisco.

“Any book by Dan Solomon is so much fun to read that you hardly notice how much wisdom you’ve down-loaded. In this one, his best to date, we explore some creative places and eras of the modern world–towns and their architects, of course, but also Nabokov and Balanchine. Dan brings to each his unique mix of passion and sanity.” – Robert Campbell, Boston Globe

[Housing and the City, LOVE versus HOPE] is a treasury of fascinating, sensible, prescient ideas and observations, delivered with a hand that is deft and light. I devoured it with pleasure. — Robert A.M. Stern, Architect

“This is one of the richest, most stimulating urban books I have read in a long time. It abounds with sharp observations …there is not a dull page …This is a book that will inspire people to go back to repeatedly. Perhaps when Housing and the City is rightly recognized as one of the great urban books of our time, an index will miraculously be added.” —Philip Langdon, Public Square

“This book is a treasure. It holds a new way of looking at humanity’s greatest invention: the city. Dan Solomon helped us rediscover why city patterns work the way they do. Then he helped us rediscover how to add to the city so that it continues to change into the future, without destroying what came before. Love vs. Hope distills a lifetime of wisdom about all of this.”—Gabriel Metcalf President and CEO SPUR [San Francisco Planning
and Urban Research]

“A must-read for urbanists and the uninitiated who share a love for cities and what makes them work. Solomon’s mastery of language amply evokes the richness of the urban environments he describes. He captures the essence of complex design, planning, and social concepts and realities, and makes them accessible to all.” – Elinor Bacon Former Deputy Undersecretary of HUD Director HOPE VI