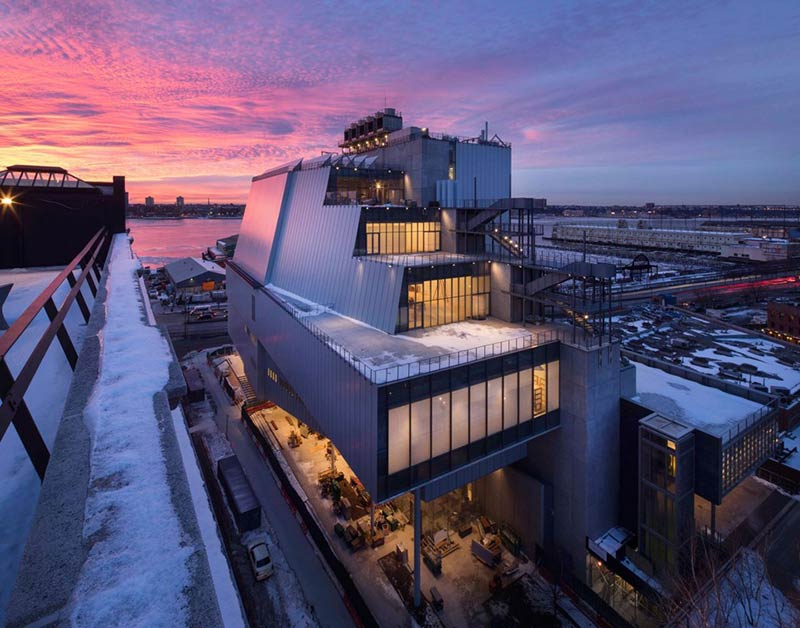 In New York City, toward the southern end of the High Line, a new building seems to float gracefully above the ground. Some critics have compared it to a ship, a nod to New York’s nautical past. But its angled gray surfaces, and the way in which it hovers in the air suspended on thin columns, make it seem more like a spaceship version of Michael J. Fox’s DeLorean in Back to the Future.

The building, which opened on May 1, is the architect Renzo Piano’s new Whitney Museum of American Art, following a relocation from the museum’s old home on the Upper East Side. Piano himself has acknowledged the aeronautical aspects of the building’s design. “The new Whitney is almost ready to take off. But don’t worry, it won’t, because it weighs 28,000 tons,” he told a crowd at the official opening event.

The reviews of the new design have been glowing (The New York Times called it a “glittery emblem of a new urban capital.”) But the new Whitney’s most intriguing feature might be one that’s gone largely unnoticed: its custom flood-mitigation system, which was designed halfway through the museum’s construction, in the aftermath of 2012’s Hurricane Sandy, when more than five million gallons of water flooded the site. The system’s features include a 15,500-pound door designed by engineers who build water-tight latches for the U.S. Navy’s Destroyers. “Buildings now have to be designed like submarines,” said Kevin Schorn, an assistant to Piano, reflecting on the demands of a warming world and what it might mean for design. “Do we have to completely rethink our infrastructure? Do we have to completely rethink everything?” […]