Joshua Prince-Ramus of the internationally acclaimed architecture firm REX has been awarded the sixth Marcus Prize, an architectural prize offered worldwide to recognize architects ‘on a trajectory to greatness.’ This $100,000 award, supported by the Marcus Corporation Foundation (the philanthropic arm of the Marcus Corporation, a lodging and entertainment company headquartered in Milwaukee) and administered by the University of Wisconsin-Milwaukee School of Architecture and Urban Planning, includes a cash prize to the recipient and supports a design studio at the school that will be collaboratively led by Mr. Prince-Ramus.

Joshua Prince-Ramus is the founding principal and president of REX, where he leads the design of all projects. Joshua was the founding partner of OMA New York—the American affiliate of the Office for Metropolitan Architecture/Rem Koolhaas—until he rebranded that firm as REX in 2006. While REX was still known as OMA New York, Joshua was partner-in-charge of the Seattle Central Library and the Guggenheim-Hermitage Museum in Las Vegas, among many other cultural projects.

A former member of the TED Brain Trust, Prince-Ramus has been credited as one of the “5 greatest architects under 50” by The Huffington Post, one of the world’s most influential young architects by Wallpaper*, and one of the twenty most influential players in design by Fast Company; he was also listed among “The 20 Essential Young Architects” by ICON magazine and featured as one of the “Best and Brightest” by Esquire magazine. He is a frequent contributor to architectural academia, convinced that—if architecture is to evolve—professionals have a responsibility to improve the profession from within. He has been Eero Saarinen Visiting Professor at Yale University and Cullinan Visiting Professor at Rice University, and has been a visiting professor at Columbia University, Harvard University, the Massachusetts Institute of Technology (MIT), and Syracuse University. He lectures frequently in universities and symposiums around the world.

During the spring 2016 academic semester, Prince-Ramus will make scheduled visits to the University of Wisconsin-Milwaukee’s School of Architecture and Urban Planning, leading a graduate studio in collaboration with Adjunct Assoc. Prof. Matt Jarosz, dealing with specific challenges in architecture that will have enduring benefits to Milwaukee’s urban fabric. He will also be invited to participate in public workshops and lectures. 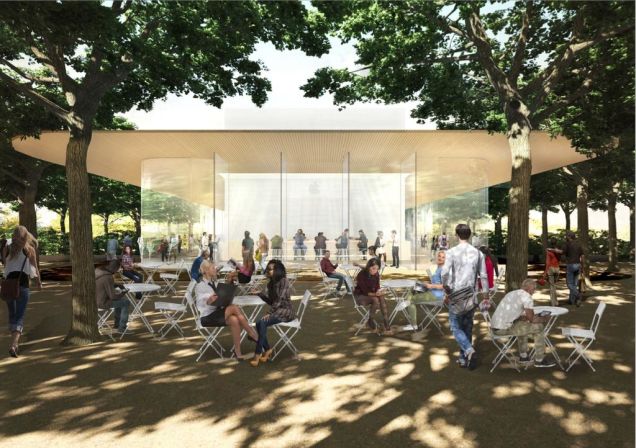 Apple’s Cupertino Campus Will Have an “Observation Deck”

July 31, 2015September 28, 2015
0
According to the plans, Apple aims for the visitor’s center at 10700 N. Tantau to “create a public face of the Apple Campus 2 that reflects Apple’s business and design practices, and allows for a long-term presence in Cupertino.”