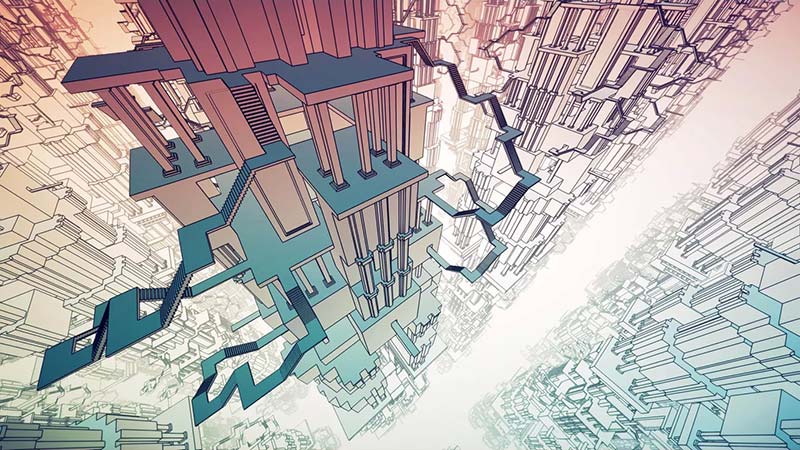 Frank Lloyd Wright, level designer? That’s what artist William Chyr was thinking, from the moment he crossed the threshold at the Robie House, not far from Chyr’s own Chicago home. “The way he was using space and guiding people through the building, I think there are a lot of really good lessons,” says Chyr.

It was a rare IRL architectural excursion, as Chyr has been immersed in building the digital levels of Manifold Garden, his first-person 3D exploration game in which you defy gravity in order to walk up walls, fall through windows, and launch yourself from one side to the other of an infinite stepwell, all in the service of solving increasingly difficult puzzles. As the game’s development process draws to a close, Chyr has been taking it on the road, including an appearance at the 2016 Kill Screen Festival earlier this month in Brooklyn.

Chyr studied physics and economics as an undergraduate, while also working as a juggler and balloon artist. His dream at the time was to join Cirque du Soleil, but “no one wanted juggling,” he told the Kill Screen audience. Days after he graduated from the University of Chicago in 2009, he was commissioned to do a balloon installation in Millennium Park, launching an accidental career. After four years, “I felt stuck doing that. No one is really a balloon art connoisseur. But I could show up in a space like this”—he waved around the Art Deco auditorium in which the festival was held —”with a suitcase and, in a week, fill it with art.”

In 2012, inspired by his own indie gameplay, including thatgamecompany’s Journey, Chyr thought he could learn how to use Unity, the popular game-development engine, in three months and fill a digital space instead. Three-and-a-half years later, he’s still working on that project, with Manifold Garden set to launch in early 2017. […]