Michael J. Lewis – On the architectural horror of Albert Speer 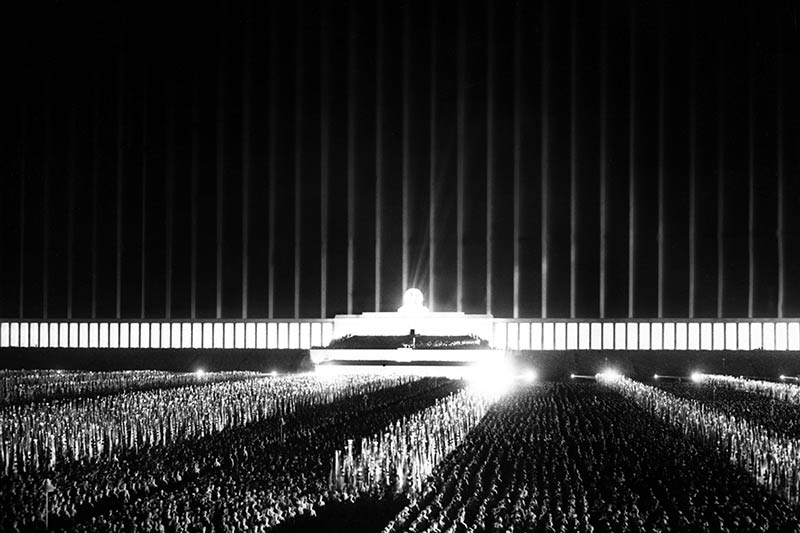 It is one of history’s cheekier pranks that the first architect ever to appear on television was that thirty-year-old prodigy with the movie-star face, Albert Speer. Nazi Germany was the first country to introduce television broadcasting, just in time to cover the 1935 Nazi Party Rally in Nuremberg. If you search for it, you can watch a short clip as Speer drives his convertible into his newly enlarged rally grounds, banters with a reporter, and then speeds off with a jaunty Hitler salute.

Of course the world knows Speer from an entirely different media appearance. This was his testimony at the Nuremberg trials, where he dramatically accepted full personal responsibility for Nazi war crimes, the only one of the accused to do so. His subdued, humble demeanor could not have contrasted more with the evasiveness, self-justification, and unconcealed haughtiness of his co-defendants. It was literally the performance of his life, and it saved him from certain execution. Having stepped into the role of “the good Nazi,” Speer never relinquished it. Upon serving his twenty-year sentence, he published a series of fascinating though self-serving memoirs, beginning with Inside the Third Reich (1970). Through it all he played the part of the naïve and innocent artist, who was guilty of nothing more than letting his childlike eagerness to build overwhelm his good judgment and moral sensibility.

That pose is no longer tenable. Archival finds in Germany and elsewhere have shown that Speer could not have been ignorant of the Nazi extermination camps, as he claimed, but was involved in finicky detail with their construction and operation. Although these finds caused a sensation in Germany a decade ago, it is only now that we have a comprehensive treatment in English, Martin Kitchen’s Speer: Hitler’s Architect. As an architectural biography, it does not altogether satisfy. What is the relationship between Speer’s architecture and Nazi ideology? Is one permitted to speak about his work in aesthetic terms? If not, why not? Only in passing do these questions divert Kitchen, who is much more interested in Speer the war criminal than Speer the architect. And that he was a war criminal, right up to his elbows, there can be no doubt. Hitler’s Architect makes a persuasive case that Speer’s escape from the gallows at Nuremberg must count as one of the last great crimes of the war. […]

Continue Reading – Source: The New Criterion
Aline Chahine
Aline is an international licensed architect currently practicing in Canada, she is the reason you are reading this right now, Aline founded the platform back in 2008 shaping the very foundation of Architecture Lab, her exemplary content curation process that defines the online magazine today.