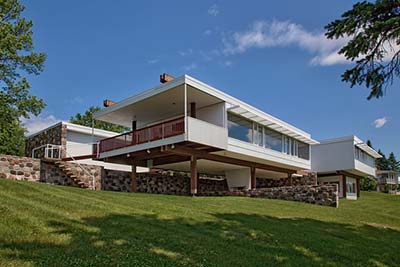 People often don’t recognize what they have in their own backyards, according to Larry Millett, author of Minnesota Modern, and that goes double for Midcentury architecture in Minnesota and the Twin Cities. According to the former St. Paul Pioneer Press architecture critic, it’s a style that played a dominant role in defining the look of the region’s cities and suburbs, but the canon of great works goes well beyond big names such as Ralph Rapson, or world-renowned projects such as Marcel Breuer’s Saint John’s Abbey Church.

“The modernism of Minnesota was certainly more buttoned-down than what you’d find on California or the coasts,” he says, “but it’s all over the houses and churches of the region, the outstanding building types of its era.”

While he was compiling buildings and stories for Minnesota Modern, which came out last month, Millett made sure to cover the entire range of building types and typologies, from the private homes to theaters, school and office buildings, to provide a look at how this universal style was given local context. While many high-profile architects such as Wright and Saarinen left a legacy of great projects in the area, local designers and firms, from Leonard Parker and Donald Haarstick to the prolific Thorshov and Cerny, added their own distinctive spins to the style between the postwar era and the mid ’60s. […]

The Plan to Build a Mega-Manhattan That Failed