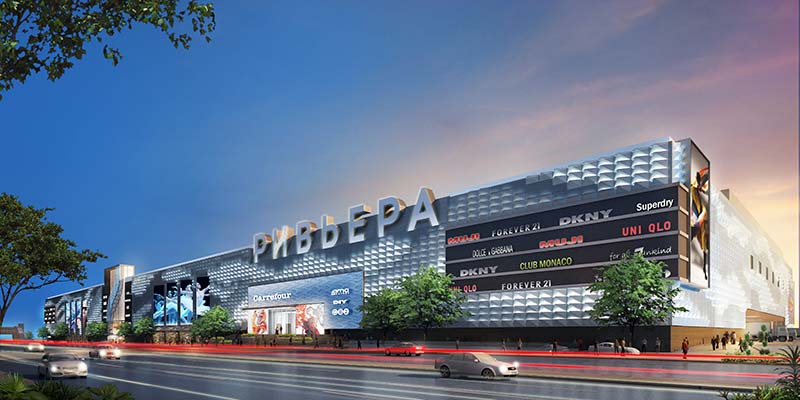 The Riviera Retail Center by Los Angeles based architecture firm, 5+design, will soon revitalize one of Moscow’s once thriving manufacturing districts. Located near the Moscow Kremlin on the edge of the Moskva River, Riviera will bring 100,000sm of high and mainstream fashion, electronics, hypermarket, restaurants, multi-screen cinema and other entertainment attractions.

The project’s overall design of Riviera is inspired by its spectacular site in Moscow, adjacent the Moskva. Using light and its relationship to the river as driving forces for the design, the Riviera Mall goes beyond the common aesthetic of retail centers to exist as an organic form derived from the land. Moscow has a remarkable quality of light that is ever changing throughout the year, from dramatic and magical snowy winters, to the long golden evenings of summertime. 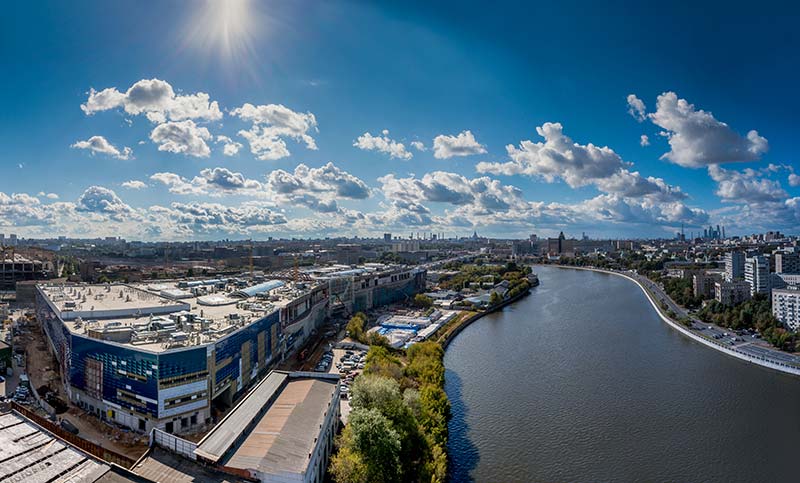 The project’s exterior is clad in iridescent blue panels that feature a wave pattern to evoke the movement of the river and reflections of sunlight on its surface. To create movement and texture, three different profiled panels were arranged along the 400 meter long façade in organic wave-like patterns. The raised profiles of the iridescent panels naturally shimmer as the angle of the sun and cloud shadows change throughout the day. Many of the panels are internally lit with animated LED sequencing that will continue the effect at night. 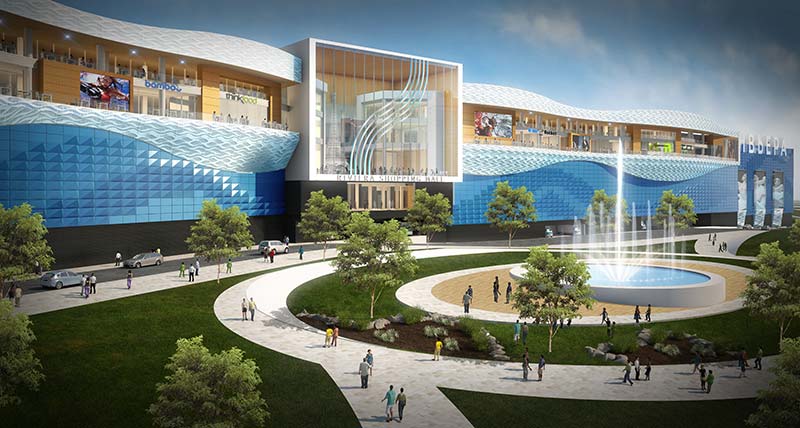 White perforated metal panels were laser cut and inserted alongside the blue panels in a custom wave pattern. The project’s eight large scale video LED panels were placed at key vantage points and stand at 12 meters tall. Angled for oblique viewing along the projects busy highway frontage, the videos were composed as a chorus line of dancing images that reveal the excitement and overall experience within Riviera. On the long elevation facing the river, a series of dining terraces are composed in a wavy form on the upper levels, giving the façade a physical undulation and dynamic three dimensional rhythm. 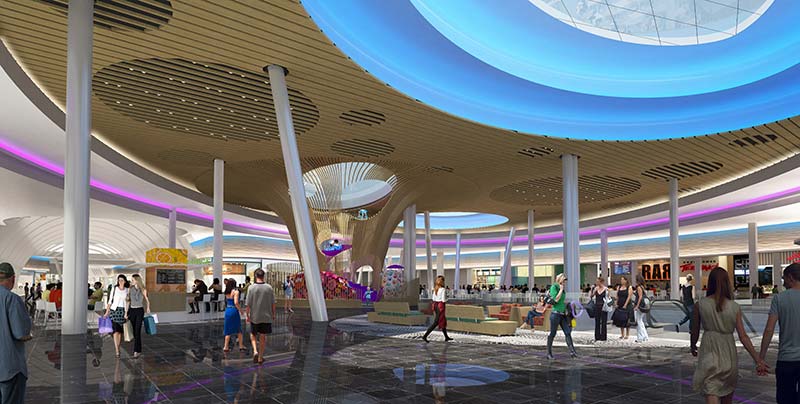 Once inside, the interior space is defined by light. Inspired by American artist, James Turrell and his concept of using light as sculpture, Riviera’s three interior courts emulate some of Turrell’s iconic installations. Large oculi that frame the sky are encircled by illuminated bands of color, which vary in size and hue from one zone to the next. The combination of natural light and animated colored light, create a sense of place and identity as well as wayfinding for the project’s guests. 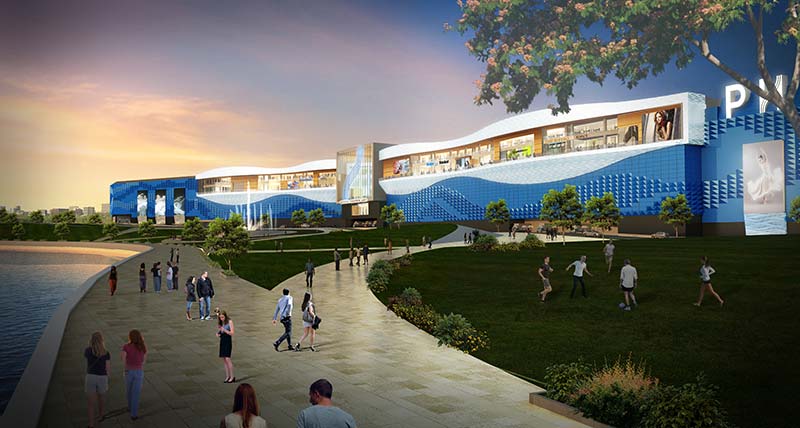 At the center of the project, the Grand Court is designed as a multi-event space with alternating programs. It is surrounded by 2 levels of balconies overlooking over 1000sm of floor area. The space is large enough to host fashion shows, concerts, corporate events, seasonal festivals, art shows and promotions for hundreds of people. On the axis with the Grand Court sits a 3 story high window that will overlook the River. Plans are in the works to convert properties just north of the project into a riverside park that will extend the public realm of the project to the Moskva. 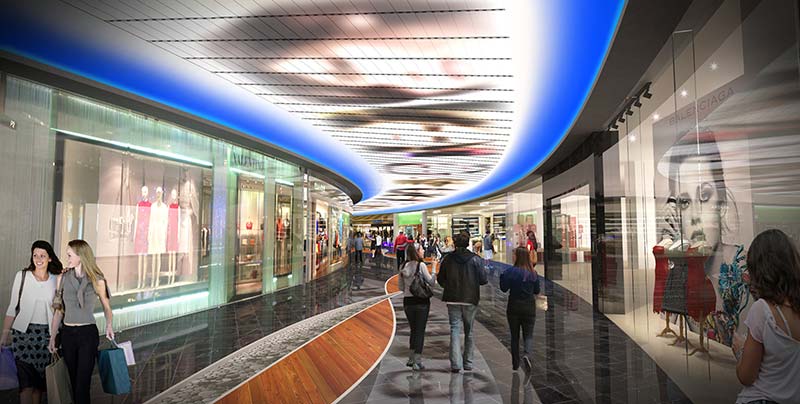 The project’s 3 level retail galleries are anchored on the ground floor by an 8000sm hypermarket to the east and a multi-level department store to the west. On the third floor, food court with an iconic two story high kids play structure will be featured at the west side. On the third level east, the 9 screen Cinema will sit adjacent to the entertainment area. All along the north gallery, 2 level restaurants with outdoor terrace will provide an excellent view of the river and Moscow’s bustling skyline.

Slated for completion at the end of this year, Riviera will become an iconic destination within the region and a catalyst for revitalizing this portion of Moscow’s historic manufacturing district. 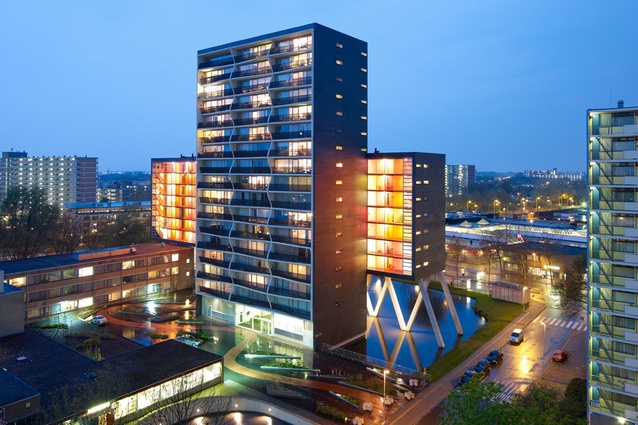 September 2, 2015
0
A report has warned that there will be a serious shortfall in the amount of housing for over 65s in Australia in coming years