The scheme looks to redefine the area’s public space by creating terraces and gardens that step up into the retail complex. The new complex keeps the original identity of the Part-Dieu shopping centre through the re-use and revitalisation of its iconic yet run-down façade, which will ‘evaporate’ as it reaches the new glazed extensions that open up onto the street.

The project houses of a mixture of commercial, leisure and newly created public space. The design restructures each side of the mall, opening up the building to the street and adding a vast public roof garden. At the same time, through re-arranging the existing programme and replacing the old car park, MVRDV has vastly increased the usable space of the building; adding an extra 32.000m2 gross lettable area as well as considerable areas of public space. The lower levels of the complex consist of retail spaces, whilst the upper levels host restaurants, parks and a cinema; as well as several half-levels of parking.

As part of a wider urban plan for the area surrounding the Part-Dieu shopping centre, the design by MVRDV focusses on integrating the building become more in its surrounding urban fabric and hopes to allow everyday life to permeate through it. The street is not only extended through the building via an east-west walkway, but also over it by stairways and escalators that take users up and over the complex. MVRDV pushed to reconnect the shopping centre with the facilities in its immediate context. A rearrangement of terraces on the south façade have provided direct connection with the library, and the restructured main east entrance provides access to visitors arriving from the Part-Dieu train station; which is also due to be renovated.

The public realm on the street level is to be extended onto the shopping centre itself. By rearranging the rooftop technical facilities and carparks, MVRDV has created a series of large terraces and green spaces that are accessible directly from the street. “The terraces turn the vast roofs of the shopping centre into open, green space in which the public can meet and relax; a quality that is currently missing in this area.” Explains MVRDV co-founder Winy Maas, “By rearranging the programme, we create an urban platform that is somewhere between tranquil park and vibrant market square, recreating an atmosphere inspired by the Lyon river side.” The restaurants, bars and cinema all spill out onto the terraces but can be accessed independently to the retail facilities through covered escalators that navigate around and over the building. 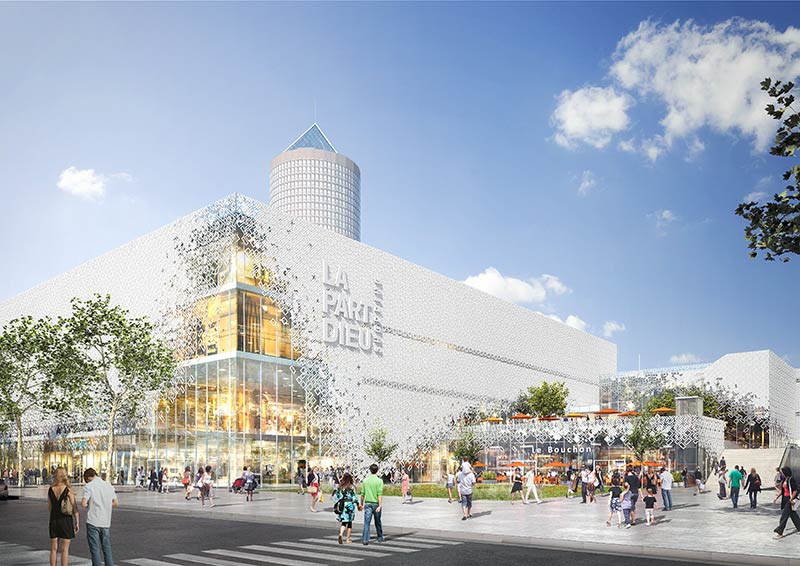 In a move to enhance and improve on the existing identity of the Part-Dieu development, MVRDV will revitalise the existing façade and reproduce it over the new structure, through the gardens and even throughout the carparks. In order to maintain the identity of the shopping centre, and at the same time try to reduce the construction footprint of the building, the existing façade panels will be redistributed throughout the design. The formerly beige concrete panels will receive a dirt repellent white coating, giving the façade a prolonged refreshed look. Where extensions are added to the building, the pattern of interwoven rectangles will continue over the new envelope eventually ‘evaporating’ as they reach the building entrance; a physical and symbolic gesture to the new opening up of the shopping centre.

“The redevelopment of the Part-Dieu commercial center is an opening act towards the city” says Winy Maas, “The formerly enclosed and defensive block is peeled open and thus becomes a place for the public to inhabit. It becomes part of the city.”

This evaporation of the façade, coupled with the redefinition of the spaces within and outside the building, looks to reconnect the Part-Dieu centre with not only its immediate surroundings, but also to the wider area of Lyon. Views are created to the Metallic Tower of Fourvière and the city’s Basilica Notre Dame by opening up the façade pattern and rearranging the existing building masses. Following on with the idea of transparency and permeability throughout the scheme, glazed components cover the top level of structure, and glass openings as well as stairwells look down into the heart of the shopping centre.

This is, after Gaîté Montparnasse in Paris, the second large scale shopping centre renovation MVRDV has taken on. Both transformations open up massive introverted structures that absorb life out of the city and connect them to their urban context. MVRDV sees many of these malfunctioning giants in European city centres that need re-socialising. Part-Dieu opens up the shopping centre, adds public space yet maintains the former quality of the architecture by reusing and revitalising the existing façade elements.

MVRDV won the competition to design the Lyon Part-Dieu Shopping Centre in 2013 and have since been working as a team alongside: project managers, Artelia; co-architects, SUD; Structural consultants VRD; engineering consultancy, WSP and Y Ingénierie; economist, Cyprium; and technical controllers, Socotec. During the refurbishment the centre remains open, a sophisticated phasing scheme was developed to minimize the impact on the shopping experience.