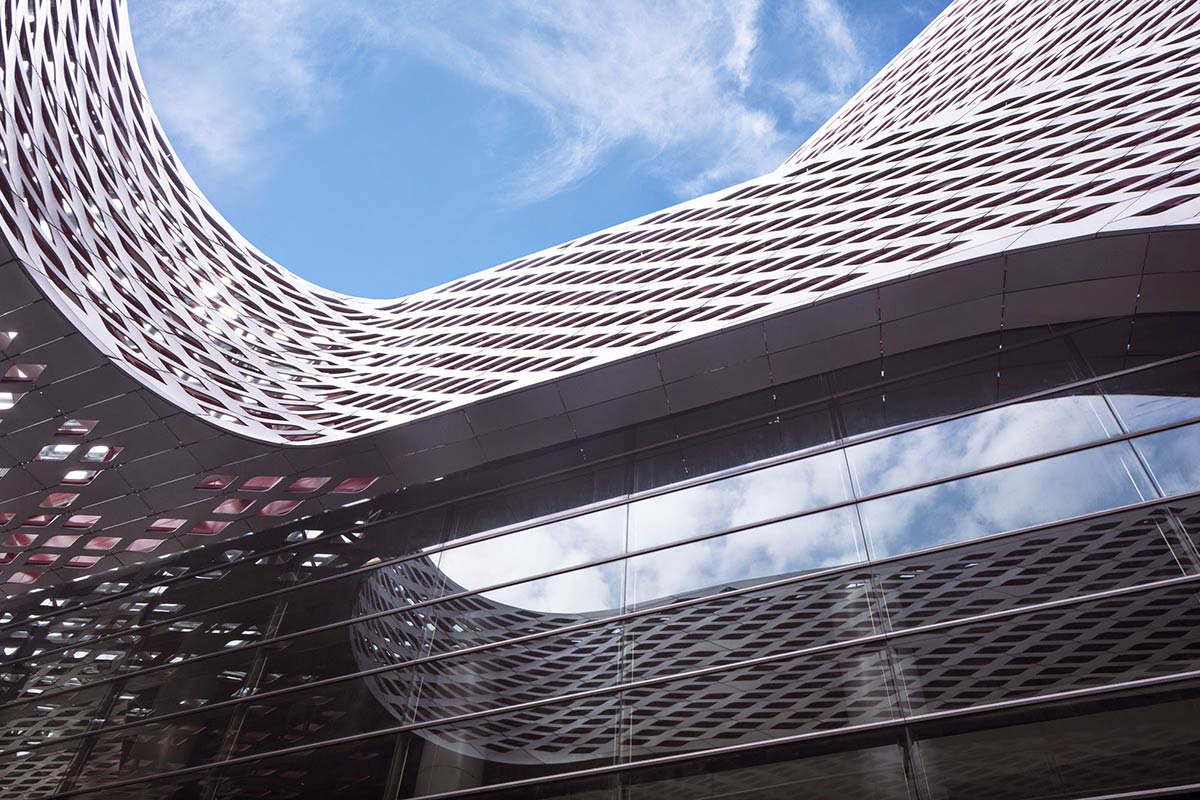 The building houses a multi-functional concert hall holding 1400 seats, a children’s theatre of 350 seats, extensive public spaces, all embodied in a large complex of cultural and sports facilities in the heart of Nanshan District. The project is the result of a design process of several years, during which time the architects paid special attention to the local needs as defined by the Client, the Mayor of the District who wished to ensure that the building was planned and built from the perspective of the local community. Despite the general practice in large Asian metropolises, the concert hall works without amplification, promising to offer a new concert venue with world-class acoustics within its wooden-clad hall. Adjacent to the large concert hall a smaller theatre has been created, envisaged as a venue for smaller productions, most notably offering a facility for children, one of the most significant members of the growing cultural communities emerging in China. The complex is linked to a larger sports facility, hosting an array of athletic and sports facilities for the residents and students of Nanshan. 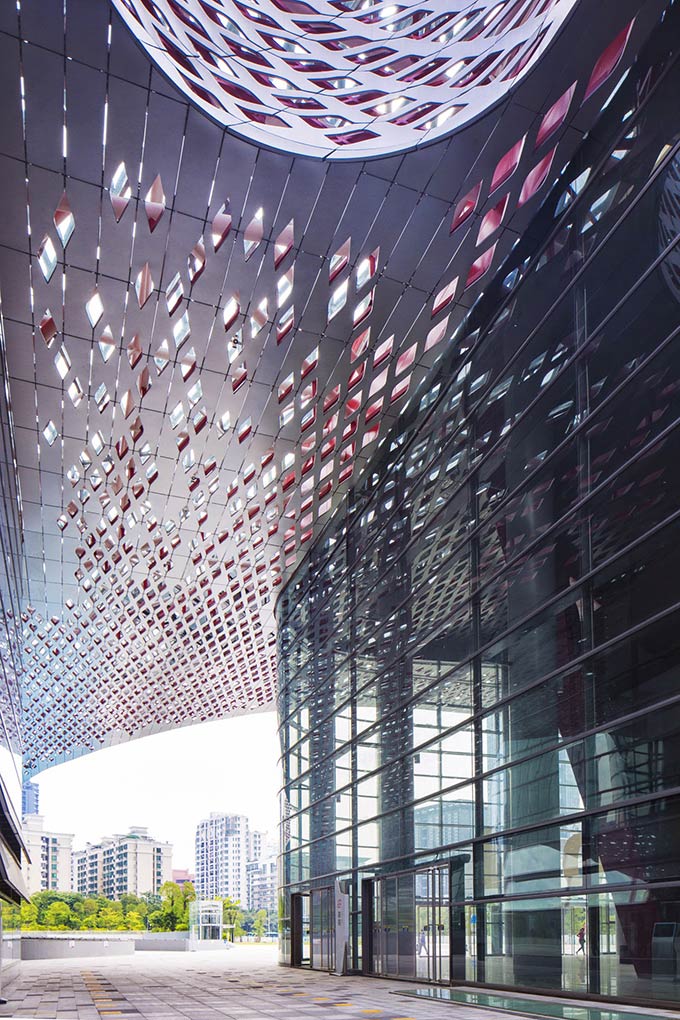 Shenzhen, situated on the border of Mainland China and Hong Kong, was a quiet town inhabited by fishermen and a modest population of 20,000 inhabitants four decades ago. Today it is a huge metropolis with over 15 million residents. Cities of this size tend to lose their human scale, becoming chaotic and spiritless, thus being difficult to live in. In the dynamic development of such cities as Shenzhen, the advances often ignored the cultural needs of the population within an emerging economic environment. It is especially true in cases like Shenzhen, where the cultural development didn’t follow the rhythm of economic growth. In Shenzhen, the places for communal or cultural exchange were limited to karaoke bars and shopping malls leaving a void in the domain of more sophisticated cultural venues. 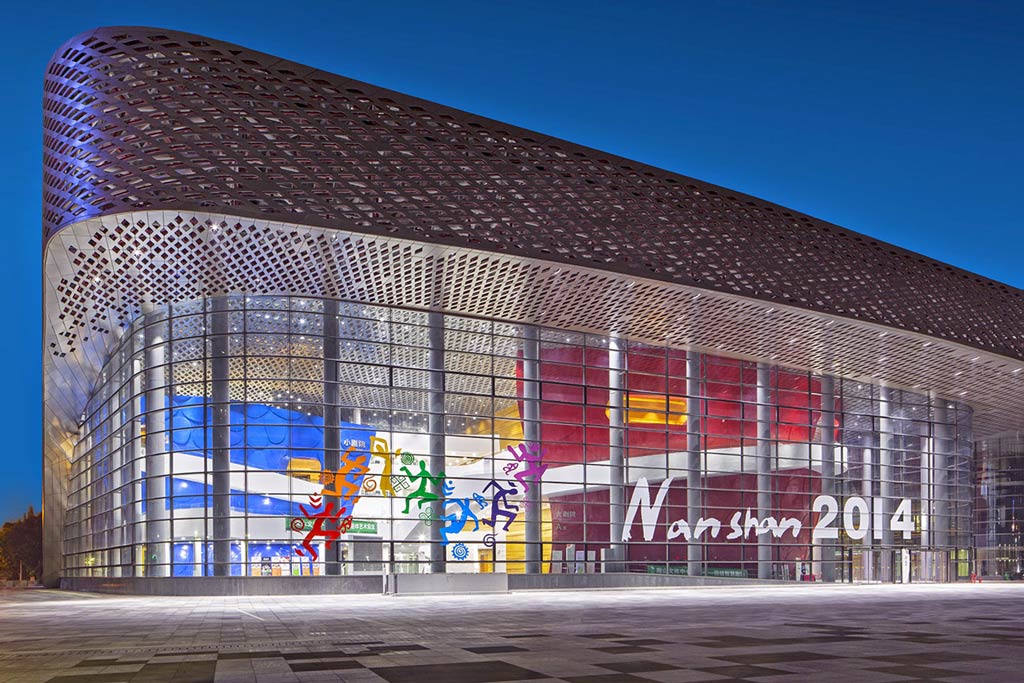 The complex designed by ZDA is placed on the main square in Nanshan district, and besides the performing arts facility and children’s theatre, ZDA designed the interior and facade of the museum as well as participated in the creation of the swimming pool and sports arena. An open-air theatre and a library complete the ensemble of buildings on the square. 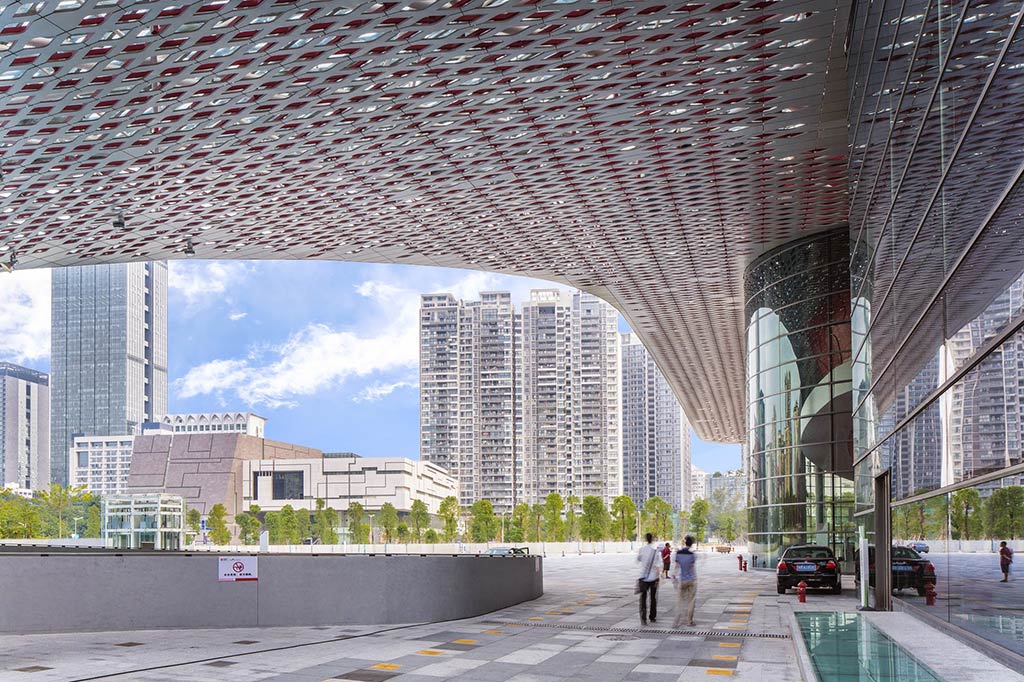 The biggest quest for the architects was to create a public space in an industrial city of 15 million inhabitants. A space which is humane, within which both the visitors and the artists feel at home inside. To achieve this, it was crucial to create a special musical experience through an intimate atmosphere and state-of-the-art acoustic environment. The architects’ first step was to convince city officials that instead of a 3000 capacity concert hall, 1400 seats are adequate. In China, the use of amplifiers is quite usual, but as in the Palace of Arts in Budapest, within the Nanshan Cultural Centre there is no need for electronic amplification, the result of the collaboration between the architects and acoustic expert Federico Cruz Barney. The hall’s acoustic volume is appropriate for both a grandiose Beethoven symphony and a Chopin sonata, each having the best sounding environment. Another architectural and acoustic achievement of the creators is the development of an adjustable ceiling, which helps to create 7-8 different types of halls in the very same space. The dynamic waves of the balcony create a special visual experience, as prepared in thick wooden cladding. The concert hall was inaugurated by the Royal Liverpool Philharmonic Orchestra. 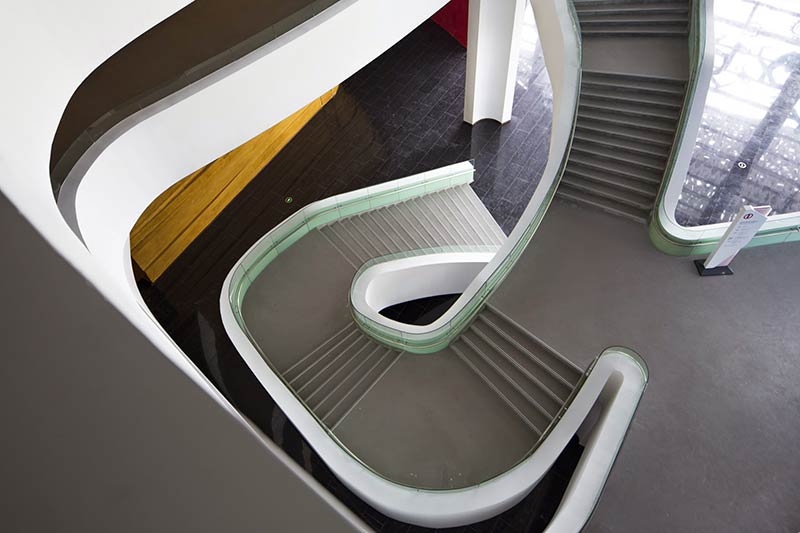 All levels of the Cultural Centre are connected by a large scale foyer where the space greets visitors with large blue and red walls, images of the of Chinese theatre masks. The different levels are linked with white ribbon-like walkways. The overall architectural vision of the entire building complex is characterized by the metal floating roof which hovers above the entire complex, fabricated from tens of thousands of individually made aluminium forms. 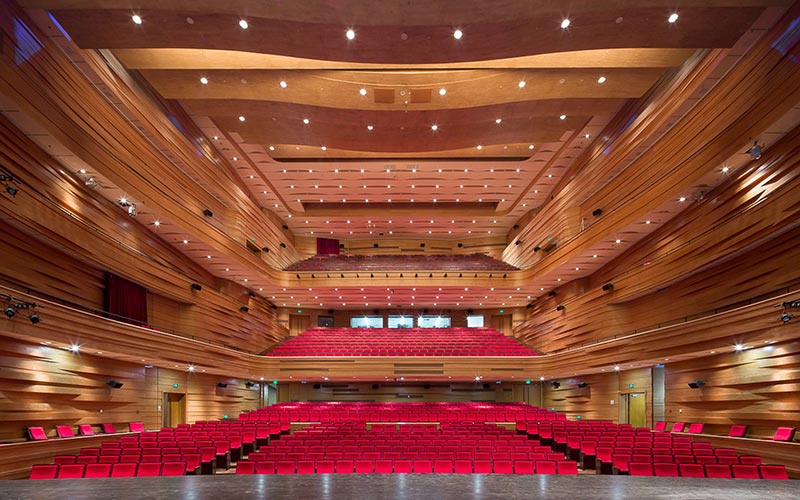 Another goal and challenge for the architects was to create a building, which is sustainable and environment-friendly, as in traditional Chinese construction these issues do not always receive adequate emphasis. An important component of the issue of sustainability is the use of sun collectors and realising that the huge amount of energy necessary to manage the climate control of such a building can be decreased substantially.