After eight years, £80m and extensive research on 1970s concrete, Denys Lasdun’s venerable modern monument is looking better than ever

There is a view of architecture, not much heard now, that it is like symphonic music, a sculpture, or a poem. It is a hard-won composition of parts and whole, with harmonies, contrasts and resolutions. It is ideally taut and considered, such that every detail contributes, and nothing can be added or taken away without changing the totality. With buildings, there are the obvious complications that they have practical functions and are subject to changing needs, which set up a tension, creative or otherwise, between form and use. In the case of the National Theatre and its later reworkings, this view has been a source of bitter contention. They focus on the point of entry, under a porte-cochere that originally sheltered people arriving by car.

The theatre, which opened in 1976, was one of the last major buildings in Britain to embody this view of formal integrity. Designed by Denys Lasdun, it adapted to English conditions the view of his hero Le Corbusier that “architecture is the masterly, correct and magnificent play of masses brought together in light”. It incorporated other influences, such as the brooding drama that Nicholas Hawksmoor could extract from the mass of a building, and from the interaction of horizontals and verticals. It took from the ancient theatre of Epidaurus in Greece the idea of performance in a landscape, and tried to reinterpret it for a modern, urban, cold-climate setting. There was an underlying belief that modern buildings could and should aspire to stand alongside these great works of the past.

So the National Theatre is constructed around a complex geometry of interlocking right angles and diagonals, and emphatic cantilevered terraces that Lasdun called “strata”, offset by lift towers and fly towers. There are subtle changes in detail – for example, there are different types of ceiling coffering in the more and less grand areas – the whole then unified with exceptional consistency and few materials: concrete bearing the grain of its wooden boards, blue brick paving, aluminium window frames, a grey-white brick in more functional areas and a purple-brown-grey carpet which, together with the rough grey concrete, contained a memory of the combination of stone and heather at Epidaurus. […] 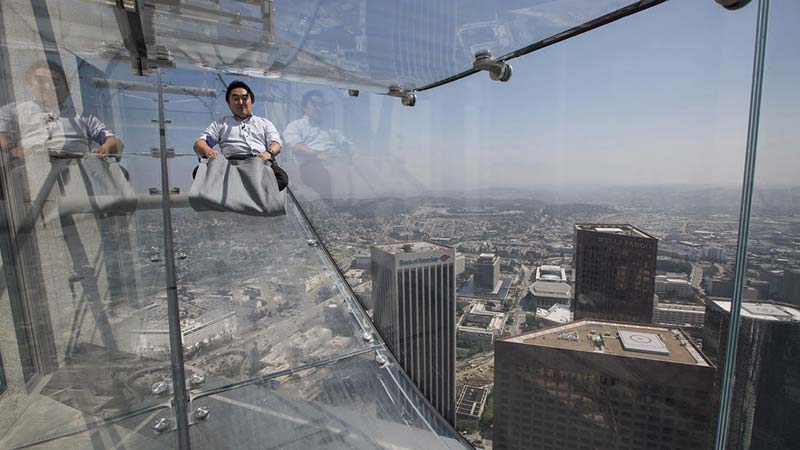 Ride the U.S. Bank Tower’s glass Skyslide with 70 floors of...