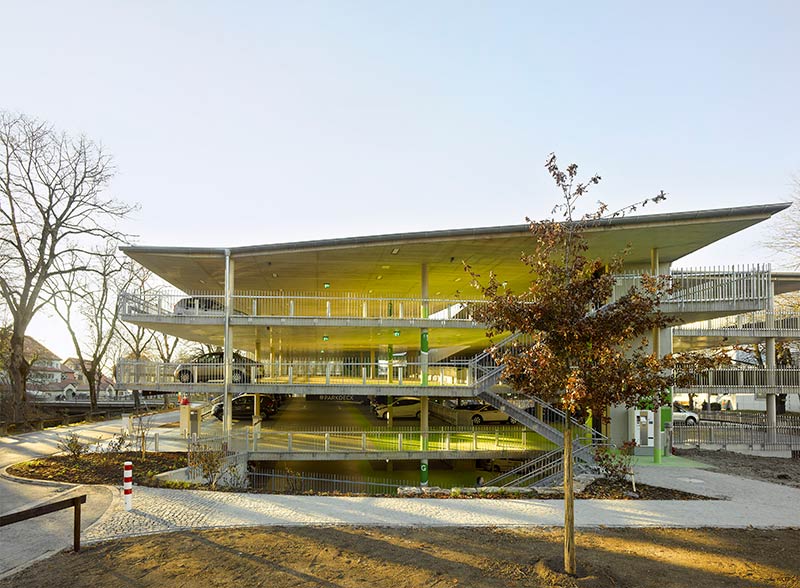 Offering over 165 parking spaces, this new public garage at the city’s center was built at the City Hall area in Kolbermoor, Germany. It establishes a dialogue between City Hall to the east and a planned mixed-use residential and commercial building to the north as it organically links the winding paths of the park that connect it to the adjoining areas. Located at the intersecton of Ludwigstrasse and Friedrich-Ebert-Strasse, the structure marks the gateway into the inner city of Kolbermoor. 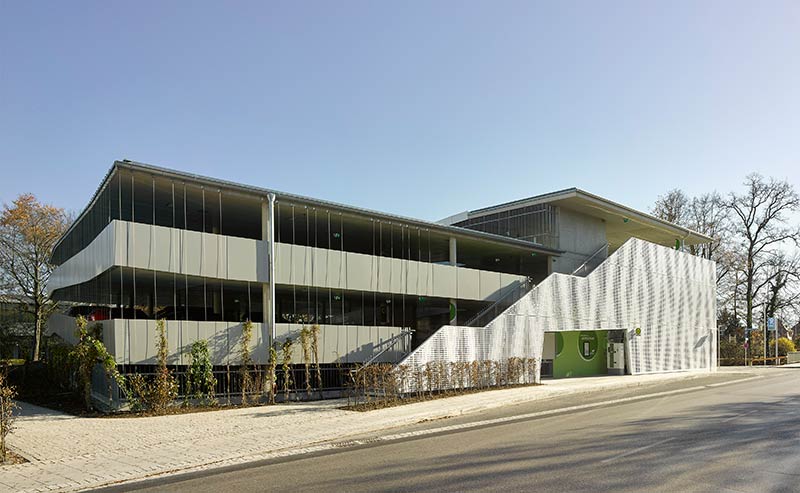 The dynamic development of Kolbermoor and the municipality’s goal of moving the City Hall and its precinct more into the public focus called for an architectural design of the highest standards. Behnisch Architekten developed a concept which arranges parking spaces on a slightly inclined ramp, winding its way up like the coiled shell of a snail. In addition to three park levels above the ground, an underground park level links the garage to the surrounding buildings and the Mangfall canal, which, in the future, will be converted into a road for cyclists. 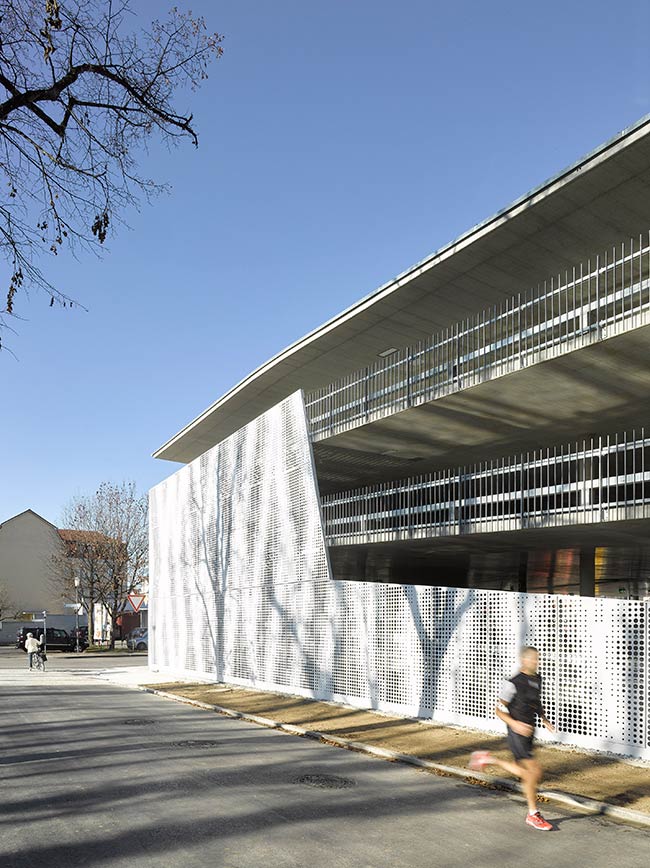 The facade design responds to three different urban situations: A solid parapet outlines the ascending ramp, while a lower parapet opens the building towards the park and allows views out. A perforated sheet metal façade contains the building and defines the city edge towards the streets in the south and west while remaining permeable. Greenery growing on steel-cable trellises around the corner cloaks the building towards the north-west, protecting against views, and is complemented by a closed parapet which reduces noise. The use of parapets instead of walls in conjunction with brightly colored floors and ceilings and a light well between the two parts of the building ensure sufficient amounts of sunlight. 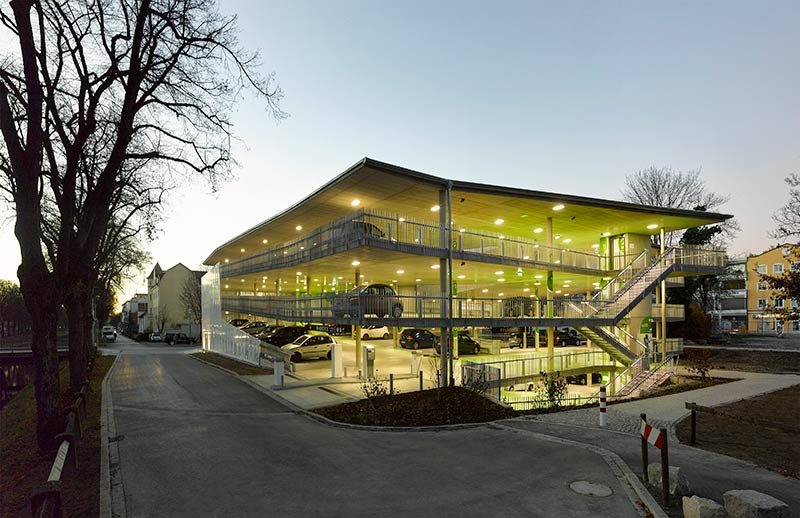 The topmost story of the car park offers views of the environs that span the upper level of the spiraling ramp. Open staircases connect with pathways through the park and the fore-court of the City Hall. Cascading stairs along the Ludwigstrasse take visitors to the Rosenheimer Strasse. The top parking deck is covered and features extensive planting to blend with the environment. 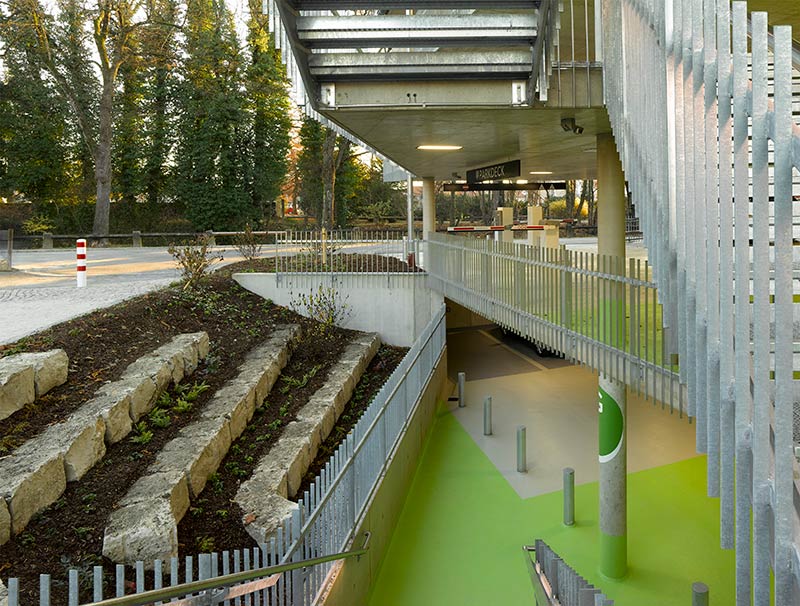 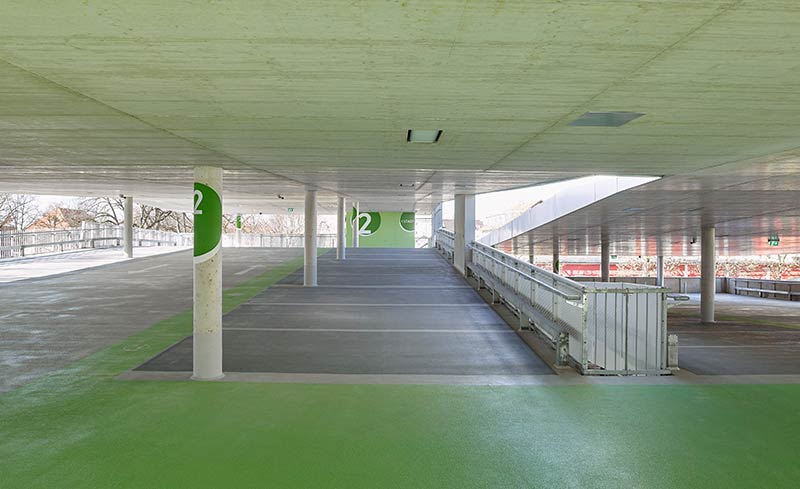 The basement, which is partially underground and has plenty of natural daylight and fresh air, creates an atmosphere that is pleasant and bright. The landscape towards the park is slightly sloped, offering views of the beautiful old trees in the park. The slopes and other green areas close to the car park are planted with woody groundcover, shrubs and herbaceous perennials.