New construction of a sports and leisure pool complex by gmp

Half a year after the foundation stone laying ceremony for the new sports and leisure pool complex, “am Brauhausberg”, the topping-out ceremony for the project – which is currently being built to a design by architects von Gerkan, Marg und Partners (gmp) – took place on 18 December.

The new development is located in a central position at the foot of the Brauhausberg, a traditional leisure and day-trip destination, and the established location of the city’s largest swimming pool complex. As a multifunctional building for all activities involving water, the new pool complex offers significantly more facilities compared to the popular but outdated existing facility built during GDR times. The public municipal baths are expected to draw increasing numbers of visitors and, on that basis, occupy a key position for preserving the special qualities of this part of the city, which – in the wake of numerous new construction projects – is experiencing a revival. 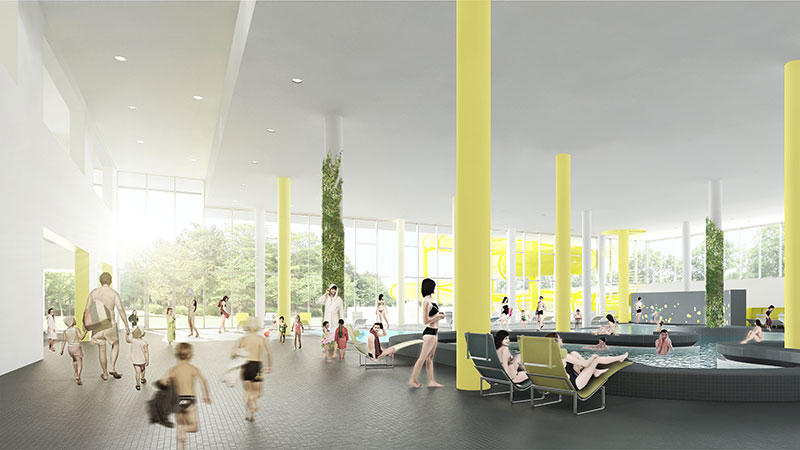 The design concept combines the different functional areas with their different dimensions in one simple building, which complies with the statutory building footprint. The different functions are – in a manner of speaking – chiseled out of the solid block in the form of insertions. They comprise a 50-meter sports pool for water polo and swimming, with a 400-seat spectator stand, the teaching pool and, in the leisure pool, a generous pool landscape with a large water slide and connected restaurant/café. The range of facilities is rounded off by the sauna area at roof level as a special place for relaxation. All facilities are accessible via short routes and can also be operated independently. 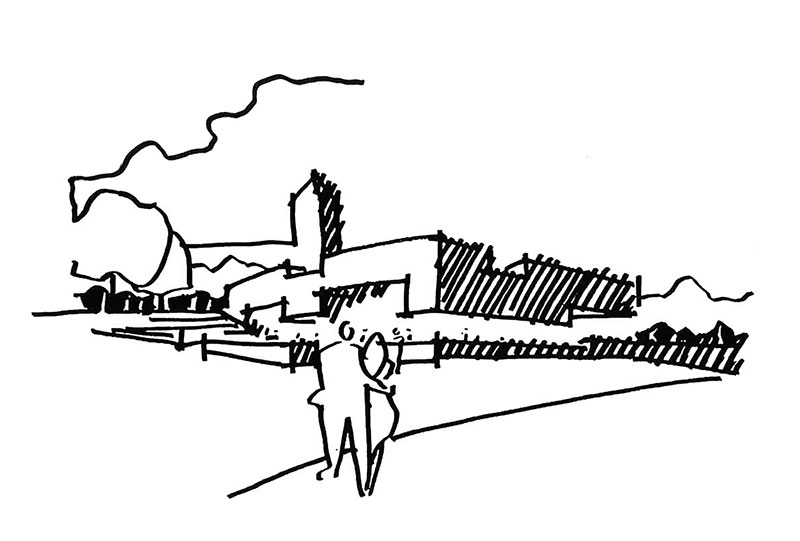 By carving the different functional elements out of the building, the interior forms a sculptural and diverse swimming landscape. At the same time, the overall stereometric shape is preserved, defining the volume in clear lines and, given its dimensions, is appropriate for this location from a macro-design point of view. The compact building shape makes it possible to create a comfortable and generous lobby area in front of the main entrance, which is approached via a raised forecourt from where a pocket park leads on up the hill. This design frees up land for a public open space for the increasingly dense city quarter around the Brauhausberg, while retaining the open hillside as a publicly accessible facility. The new city baths complex obtains its specific identity by making distinct references to the history and place.

For example, the “Badende” metal relief from the previous building (designed by the Potsdam artist Werner Nerlich) is integrated into the new development, as is a wall mosaic from the old teaching pool. While the façades will be finished uniformly with a robust mineral scratched render, all reveals feature a smooth render finished in various shades of yellow. On the one hand this emphasizes the conceptual principle, and on the other hand it replicates a historic motif of Potsdam architecture, which is traditionally characterized by rendered façades in light yellow and ochre shades, sometimes referred to as „Potsdam yellow“. The friendly color palette, which – as always – tries to capture the sunny flair of Italy and bring it to the Havel, thereby becomes the recognizable and ubiquitous characteristic of the baths.