The Antwerp based design company OMGEVING, member of the B-DNA partnership and for this competition named ‘OMG-designers and partners’, was awarded the joint first prize in the prestigious international design competition for Han Riverfront Da Nang City. The jury decided to select two laureates out of seven accepted applicants.

The city of Da Nang is located in central Vietnam and consists of five districts. These districts cover a total surface area of 1,250 km² and have a total population of about one million inhabitants. The city of Da Nang, characterized by its two coastlines along the East Sea and the Han River Delta in the city centre, is currently in a state of vast economic expansion and urban development.

A combination of three separate design strategies – ‘green corridor’, ‘green connections’, ‘green program’ – has resulted in one combined masterplan for the Han Delta at the scale of the urban area. These strategies contain solutions for the regeneration of the river’s natural system, stronger slow connections and a sustainable built program.

The three general design strategies have been converted into the design of a masterplan for the Han river, which runs through the city centre over a length of seven kilometres. At the scale of the urban river, a rehabilitation of the riverbanks would be connected to a diverse program within the public space: making use of an extensive recreational walking network, deck paths over the river and next to the riverside and water-taxi stops, you can reach floating river nature, a floating market place, a city park and an urban sport park. The integration of four public buildings adds to the public nature of the river as a whole: from north to south over the whole length of the river there will arise an opera building, waterhub building, a redesigned market hall and a concert hall. The combination of a landscape and architectural design makes for a high quality and diverse riverfront. This masterplan should be the solid base to be able to manage the rapid development of the city, in 2030 up to 1.5 million inhabitants.

The masterplan of the urban river also contains a detailed design for a strategically situated park of 2.2 hectare. 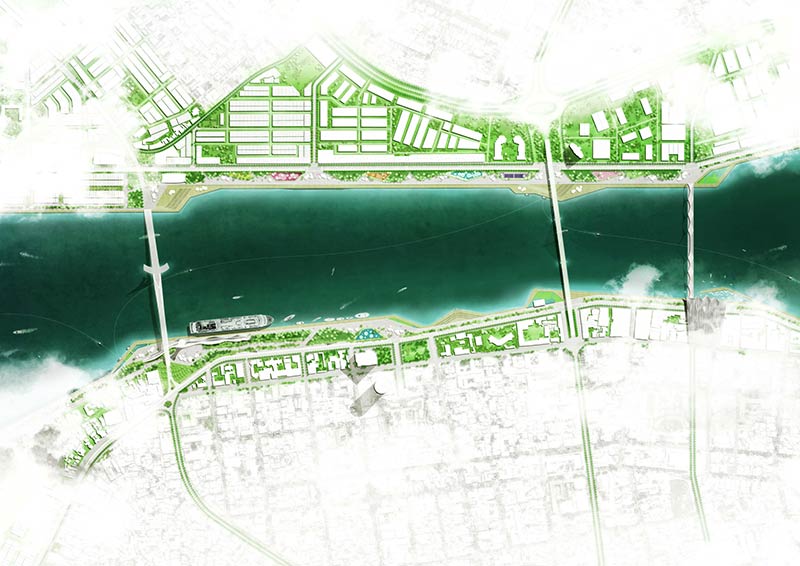 This park area transforms both riverbanks in a high quality public park with a customized design for the rapidly expanding city of Da Nang. The key principle remains restoring the river nature in the city while creating a park of which the shape refers to the original riverbanks. These riverbanks will be allocated their new functions according to the implementing program. On one hand there will be water-bound functions such as water-taxi stops and waterhub building, and on the other hand there will be park functions in the form of sports and leisure areas. The introduction of 3,000 new trees will create a design unity at the scale of the city as a whole. The integration of two new (motor)bike and pedestrian bridges, one of which will be a market bridge, allows the park areas at both riverbanks to function as a whole. This integration consolidates the relationship between the eastside and westside of the city of Da Nang. The total construction cost of the strategic park area is estimated at 85 million euro. It is the intent to involve the city closely in the development of the city. 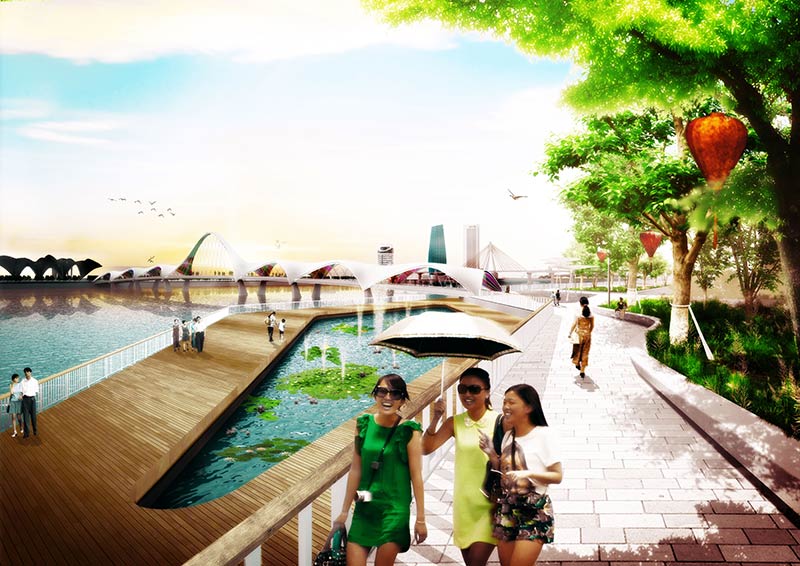 After the first round of selections out of a group of 39 applicants, OMG-Designers was selected as one of eleven design teams to submit a proposal. Seven of the eleven teams actually submitted a design. The other competing teams represented countries such as Vietnam, Japan, Singapore, France and Germany.

OMGEVING is a design company that has its headquarters in Antwerp and also has a smaller office in Ghent. The firm focuses on urban, landscape and architectural projects, from research to design and execution of the projects. In Flanders, the firm is known for its projects such as Ringland, Plan Landscape Be-Mine in Beringen, Abbey Square in Averbode, Boekenbergpark swimming pond, the vision for Space for Ghent, masterplan former sugar factory Veurne, urban vision for the Linkeroever dikes and the E313-E314 interchange.