The PALÄON pushes itself out of the slightly hilly topography and cuts into the forested meadows.The volume of the three-story building and the paths emanating from it form lines of sight that divide the landscape into vectors. A second winding path system forms synapses that connect to the surroundings. The building is a camouflage – a hyperrealistic abstraction of the landscape.

The metallic skin of the PALÄON mirrors the meadows and forests that surround it as well as the movements of the clouds in the sky passing by. Through its archaic form, the research and experience center becomes one with its surroundings. Sharp, large- formatted cuts into the building façade offer wide-reaching and fascinating views to the place where the spears were discovered, the pit of the brown coal mine, the nearby forest, and the Przewalski horses grazing in the meadows. The expressive openings cut into the building like spears in the skin of the horses and reflect this dynamic in the form language. The abstract cuts into the building also formerly react to the neighboring traces of opencut mining. The resulting expressive architecture mediates between manmade and natural landscape and forms an emblem for the place.

Exhibition
The experience exhibition, with its presentation of the original site from Schöningen lies at the heart of the project. Memorable images speak to the visitor’s senses and emotions. New findings on our ancestors, the homo erectus, his daily life and the flora and fauna that existed around 300,000 years ago are presented as well as connections to current themes such as climate change and sustainability.

The circuit through the exhibition begins in the three-story foyer in the middle of the building, which connects all of the views to the outside. The tall space creates view axes to the research and exhibition areas in the first and second floors as well as vistas to the brown coal mine. Here is where all paths leading to the programmatic areas, such as exhibition, educational areas, administration, restaurant or shop, begin and end. The foyer then leads one back to prehistoric times through the lacquered cross-section of the geological and archaeological layers of the excavation.

Central to the exhibition design is the sculptural white exhibition structure, whose form vaguely resemble those of horse bones. Through enlargement and abstraction, a row of theme cabinets form a spatially activating element with views alternating with large-format artwork. Highlight to the exhibition circuit is the spears` cabinet that presents the world-wide uniques wooden spears from the stone age. Finally the panoramic cinema makes 300,000 years emotionally experiential.

Upon leaving the main exhibition space and crossing the foyer one last time high above the entrance, current archaeological excavation and research work in Schöningen can be experienced in the research area. In the laboratory, visitors solve a tricky case with modern archaeological methods.The professional laboratory and workspaces of the archaeologists on-site are strung along the exhibition circuit and can be examined by the visitors. The ‘Adventure Research’ that takes place here daily is made comprehensible for laymen, children and experts and allowed to be experienced close-up – in the PALÄON itself and the exhibition site outdoors.

Landscape
For the design of the outdoor spaces of the new research and experience center, two complementary form languages were introduced into the landscape.They differ functionally and formally in the newly created park landscape echoing an inter-glacial cycle of primeval times and in the access and gathering areas, which are strongly influenced architectonically through the building. To the east, dense woods will soon cover half of the area of the site. To the west and surrounding the PALÄON stretch dappled forests, as well as meadows and a lake, which also accommodate the fenced- in area for the Przewalski horses. A curving network of paths leads the visitor to special viewpoints, attractions, and makes necessary connections. For example, the design of the playground was inspired from extinct primeval animals. And from a slightly raised point at one area of the lake, the visitor is given an ideal view of where the wild horses reside. 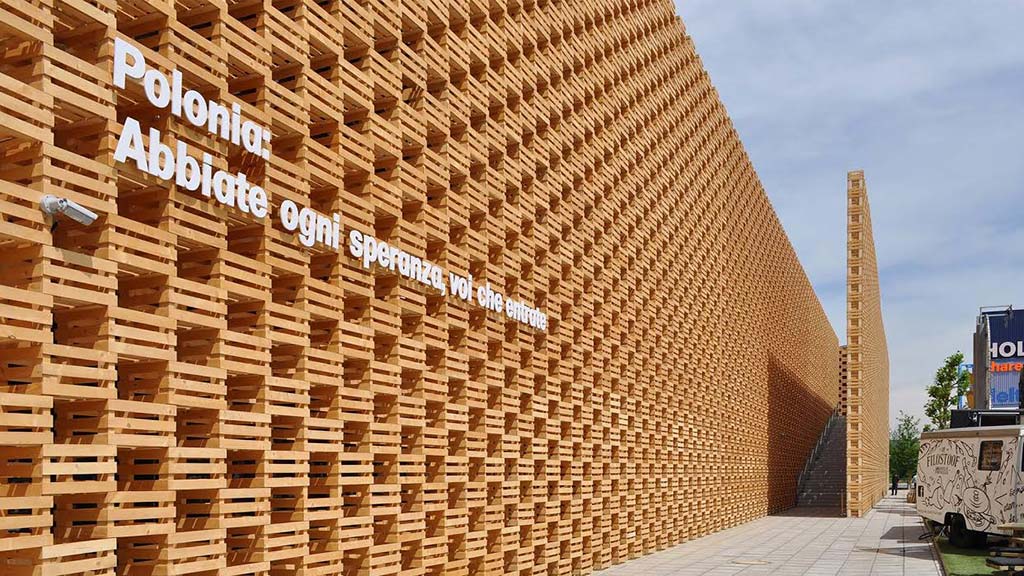 November 3, 2015
0
The idea behind the project for the Polish Pavilion at EXPO 2015 in Milan refers to Polish orchards and horticulture, very significant to the Polish landscape and economy