Bucharest, Romania, a city defined yet not constrained by its own layers.

In here you can find buildings of any scale, numerous architectural means of expression stranded in time, improbability and unbalance, everywhere, few streets still preserve the ” Little Paris ” status once earned by Bucharest, even fewer can be appreciated as a pedestrian due to the disastrous invasive role taken by the automobile.

In this unbalance, a building seeks dialogue, a residential building in the heart of the city envisioned and built by ADNBA, architecture practice based in Bucharest, Romania. 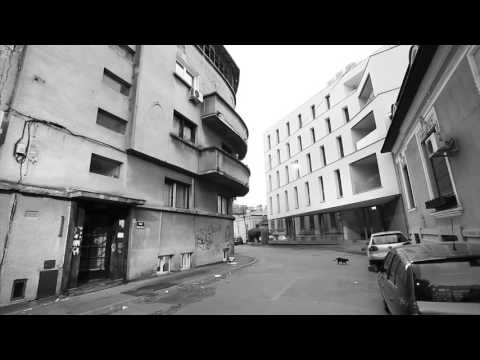 The architects describe their building further, after the break.

” Aaron Florian Apartment Building, is an honest answer to a particular urban setting: an irregular plot, the closeness of the opposite building raising privacy issues, a blind wall to a difficult neighbor and an inflection of the street. All these produce an atypical configuration – a building with floors successively recessed, the upper floors providing more light to the narrow street and the exterior spaces directing the views along it. “

” The retracted plinth gives the building a light-some, almost detached appearance, connected to the ground only by the tectonic effect of the stairs leading into the building. The transparency of the ground floor allows for commercial or office spaces to open themselves to the street, thus livening this rather narrow and traffic-less blind alley. “

” Floors 1 to 3 comprise three apartments each, while the last floor contains two larger apartments with terraces both at their level and on the rooftop, that provide spectacular views of one of the most beautiful neighborhoods in Bucharest. “

How do you see the building, how do you consider the dialogue with its tissue and neighboring buildings? We would love to hear your thoughts in the comment section below !