Richard Serra in the Qatari Desert 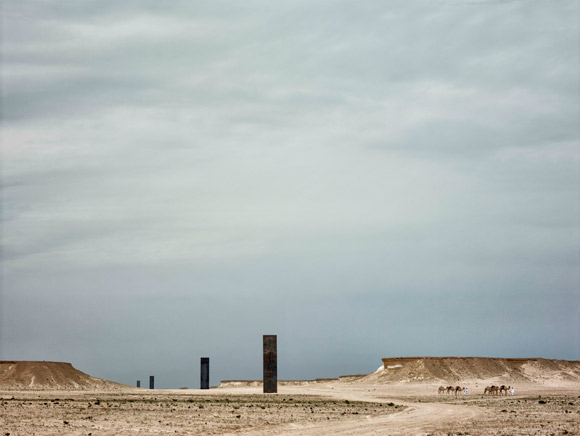 Richard Serra’s new sculpture, “East-West/West-East,” is a set of four standing steel plates rolled in Germany, shipped via Antwerp, and offloaded, trucked, and craned into place in the middle of the western Qatari desert. It’s his second public commission in Qatar—the first, a towering sculpture titled “7,” is his tallest ever—and it is being unveiled, together with a new work, at the Al Riwaq exhibition space, in Doha.

“East-West/West-East,” which spans the greatest area of any of Serra’s creations, is yet another grand piece of public art purchased by the Gulf nation. The Qatar Museums Authority is estimated to spend about a billion dollars per year on art. At its head is the young Sheikha al-Mayassa Hamad bin Khalifa al-Thani, a sister of the Emir of Qatar and a Duke University graduate, who was recently named the most powerful person in the art world by ArtReview.

I asked Serra the day before the piece débuted about what effect this enormous investment has had on his work. He told me that the Qataris have given him the opportunity to work in his own time on gigantic projects that he couldn’t possibly have conceived of anywhere else. He said that his focus is not on the political and sociological aspects of the country but, rather, on his own projects: “You know, I come here and work. That’s what I do.”

The conditions in the desert differ from those of the Grand Palais, in Paris, where he set up work in 2008. There, he said, “you can step out and have a cappuccino,” whereas, in Qatar, he has to contend with savage sandstorms. Yet the team that helped him set up was the same that he’s used for more than a quarter century; the steel is the same that he’s used in his other pieces, and it will oxidize in the same way, albeit more quickly in the hot, salty conditions of the Brouq Nature Reserve. The plates will go from gray to orange to brown, until they turn a dark amber—approximately the same color, he said, as the Seagram Building, in midtown. “How long those pieces will last, nobody knows,” he said. “But I think this piece has a good shelf life.” […]

Continue Reading – Source: The New Yorker
Aline Chahine
Aline is an international licensed architect currently practicing in Canada, she is the reason you are reading this right now, Aline founded the platform back in 2008 shaping the very foundation of Architecture Lab, her exemplary content curation process that defines the online magazine today.