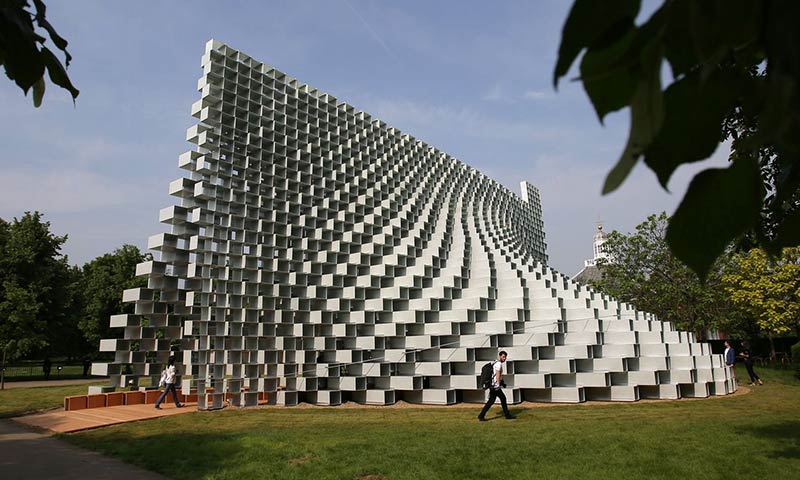 Bjarke Ingels creates the most successful pavilion yet with his heap of fibreglass boxes, while four new ‘summer houses’ join in the fun

In the history of architecture the pavilion – for an exhibition, in a garden, often temporary – has a special power. It can launch a movement, declare a manifesto in three dimensions, crystallise an idea, offer a vision of the future. Le Corbusier and Konstantin Melnikov did this at the Exposition des Arts Decoratifs in Paris in 1925, Mies van der Rohe in Barcelona in 1929. Buckminster Fuller’s concept of the geodesic dome was launched with the help of international exhibitions in New York and Montreal. In the 18th century, the follies and temples of gardens such as Stowe and Stourhead helped to create English Palladian architecture.

Of five temporary structures now on show around the Serpentine Gallery, the one that comes closest to this tradition is by the Hungarian-born French architect Yona Friedman, born two years before Corbusier and Melnikov did their thing in Paris. A series of wire circles is arranged into dice-like six-sided forms and stacked up to form a light, three-dimensional grid, off which images of Friedman’s projects are hung. It represents his Ville Spatiale, whereby great structures would hover over cities such as New York and Paris, within which people would be free to make their own spaces, to use the architecture in the way that they like.

This is not a new idea, but one conceived in the late 1950s. It has been influential, infiltrating the projects of other visionaries and thence the built work of architects including Richard Rogers and Rem Koolhaas’s Office of Metropolitan Architecture, but it has not itself come to pass, nor seems likely to do so. It is therefore a message from a somewhat remote past to a somewhat remote future, pausing in the present to suggest a poignant dream of what might be, rather than an urgent call to action. […]