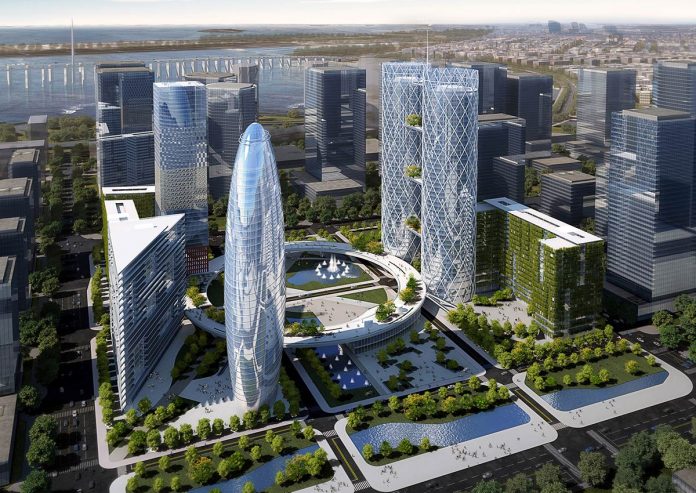 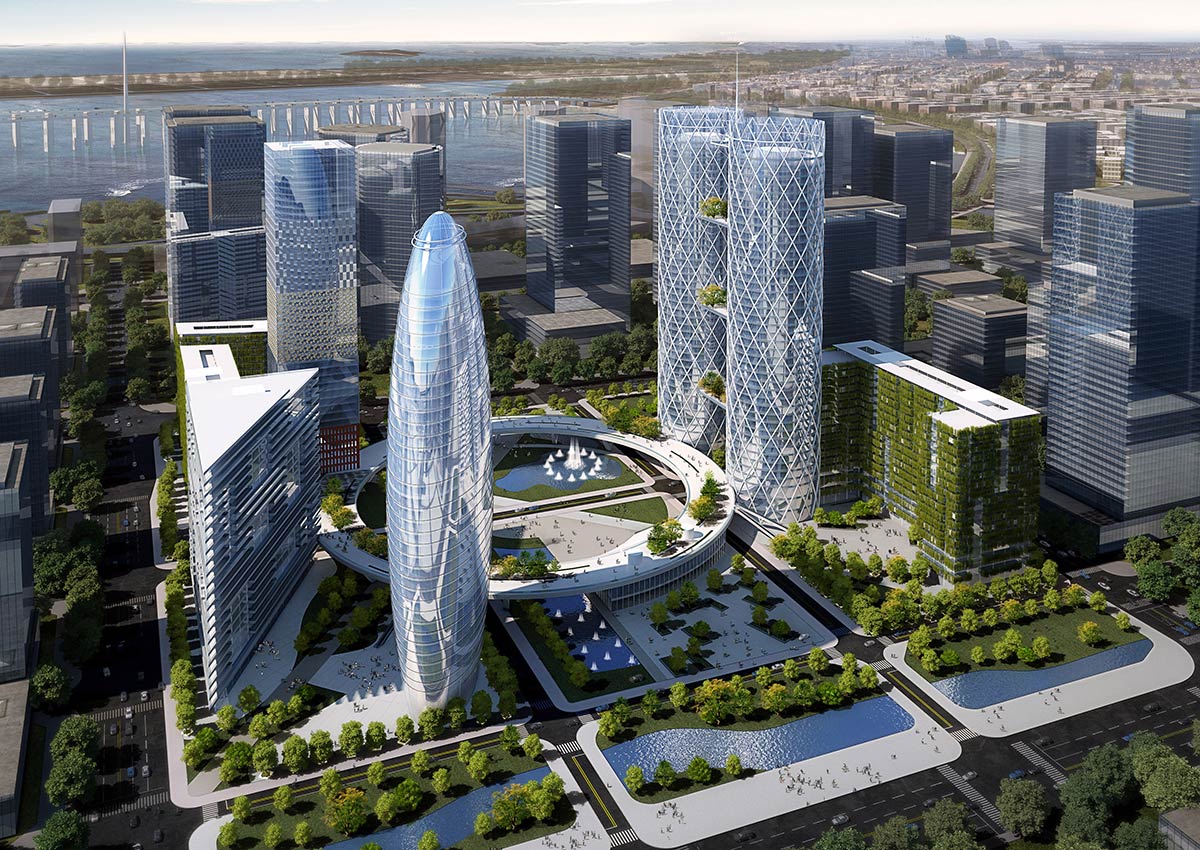 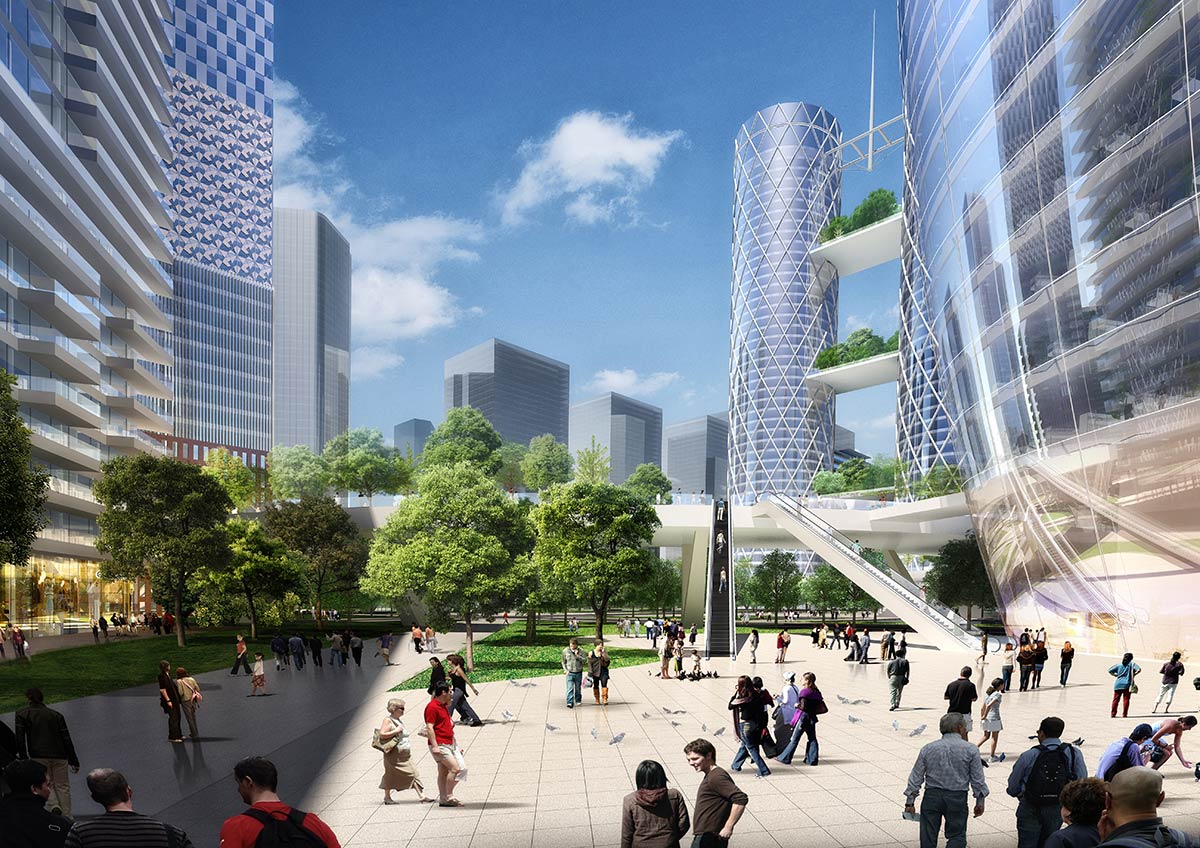 The six lots forming part of the project area are part of a dense urban mesh, very regular and uniform that is characterized by square or rectangular blocks.

The uniformity and large geometric regularity of the area, has led us to try to design a real focus point, an important urbanist element, with its own identity, able to become a cardinal point for the entire district of Qianhai .

The goal of the project was not only to achieve a certain number of buildings with a certain volume that can satisfy the client’s demands, but was also to create a pulsating center for the whole new district, able to become an icon and a reference point. 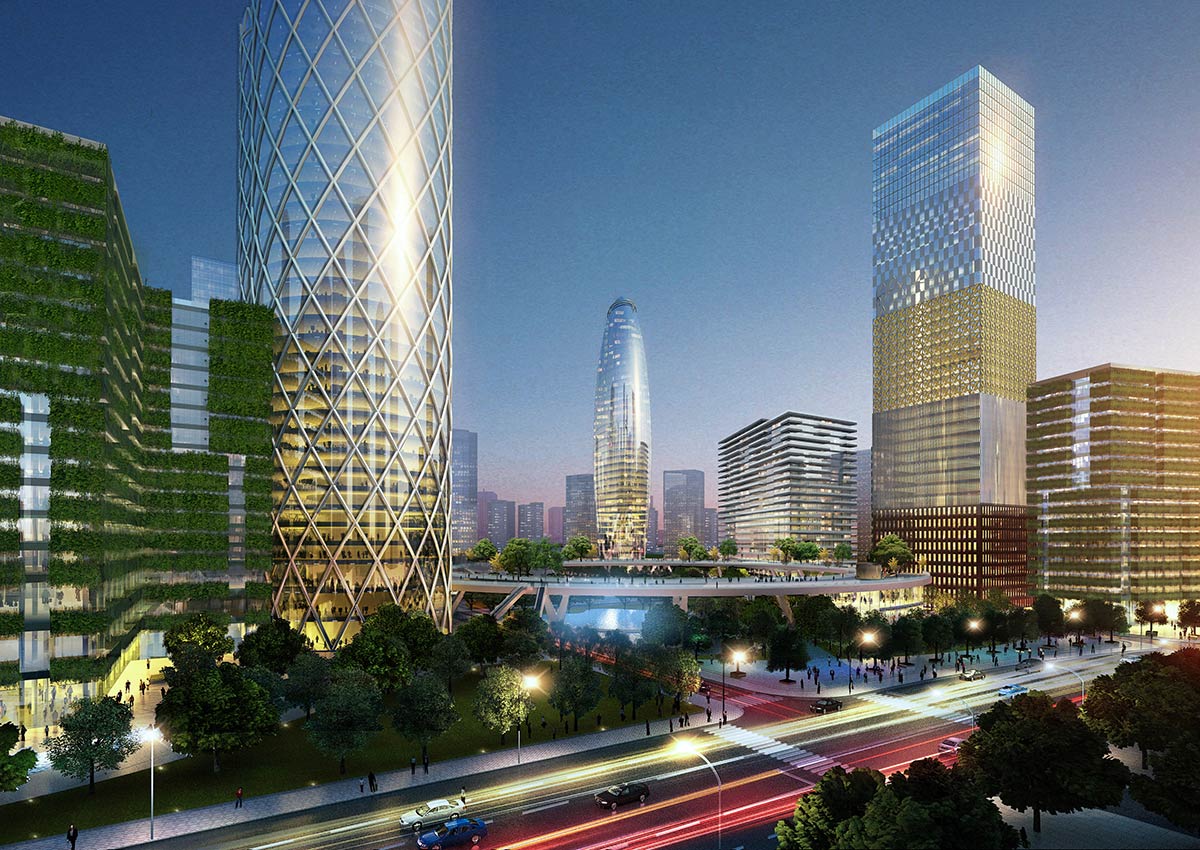 The central position of the project area in the Gui Bay gave us additional confirmation about the need for an element able to create an identity to the entire district.

The architectural element capable of assuming this important role is designed not only to become a simple landmark, but also to be a functional element for all the blocks that are part of the project area.

The need for areas dedicated the community has led us to design an elevated circle square able to connect all the lots of the project area becoming a functional element able to make quick and safe pedestrian crossings and connections between buildings and a meeting place common to all buildings.

The circular shape of this raised plaza thanks to the large central hole allows everyone to take a look on the large urban park with lakes and paved pathways.

All the major buildings of the project area are connected by this raised plaza. The first floors of these buildings are reserved for commercial activities. This therefore create a real “outdoor mall” which will let the square to be always busy and crowded, even on non-working days.

The goal of the project was not to create a series of buildings unrelated to each other, but a real organism that can operate synchronously, serving as best as possible the city of Shenzhen. 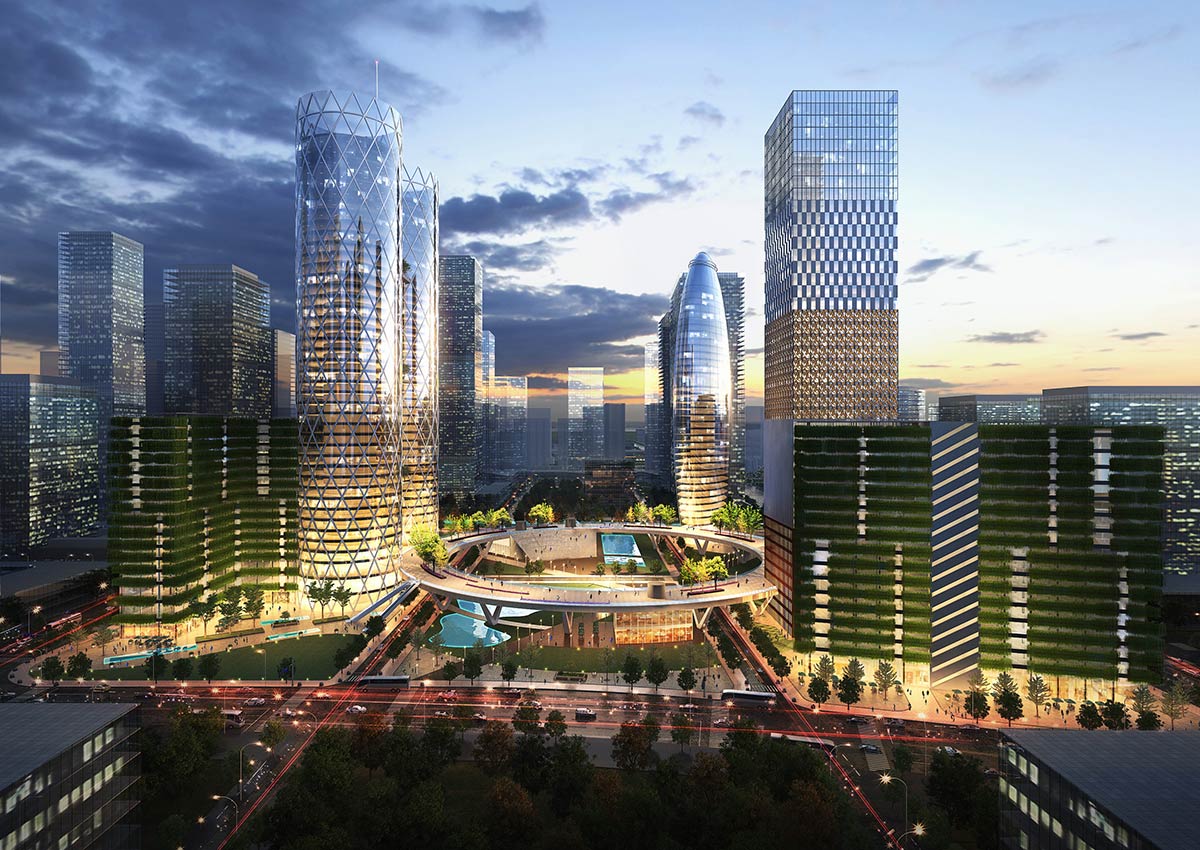 The target was to organize the project according to four distinct levels, placed at different elevations: 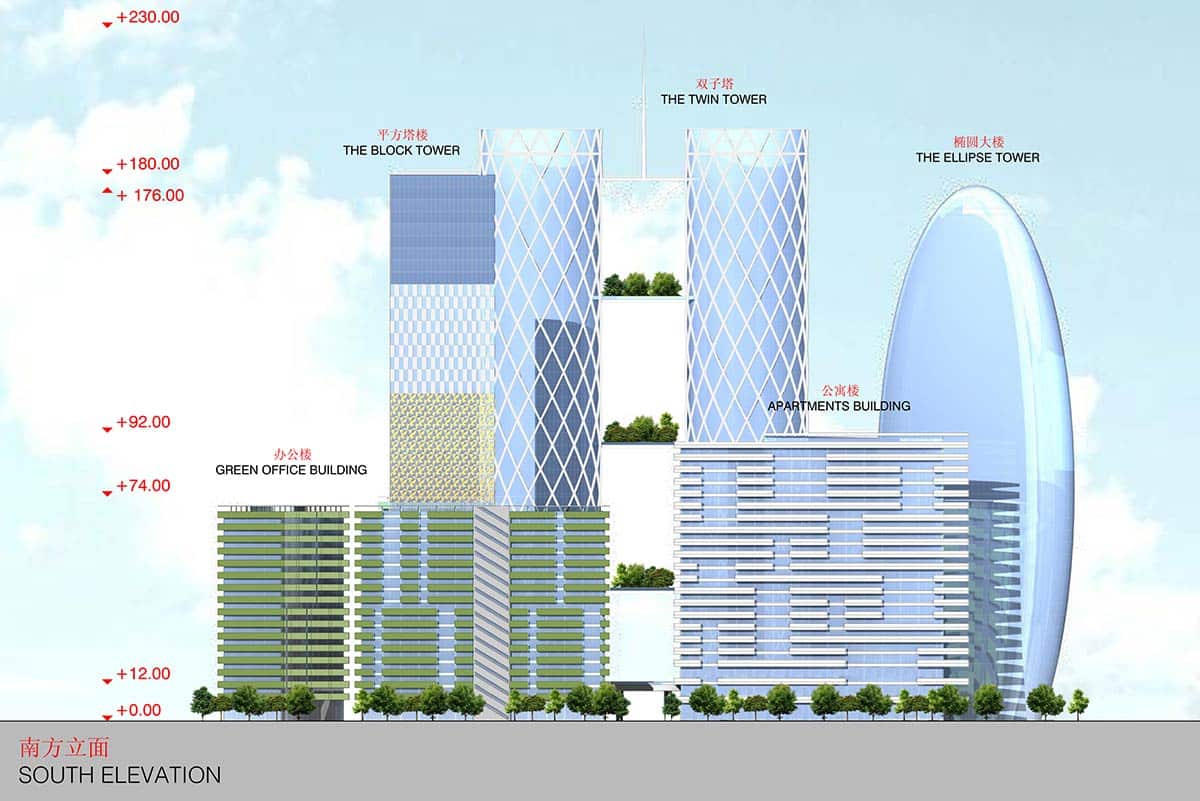 Each of these buildings has its own language and its own identity, because in this way it was possible to give the district a more vibrant and dynamic mood. 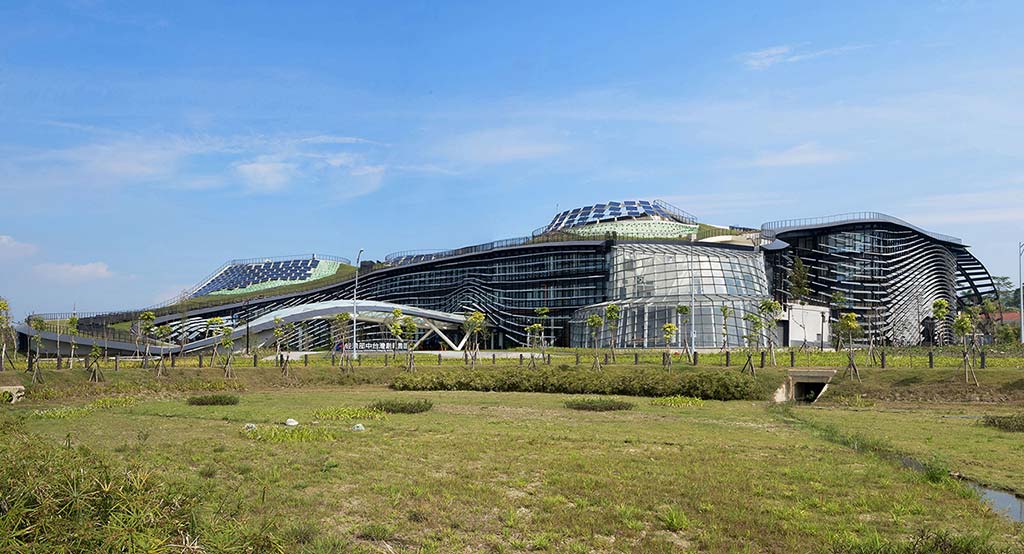