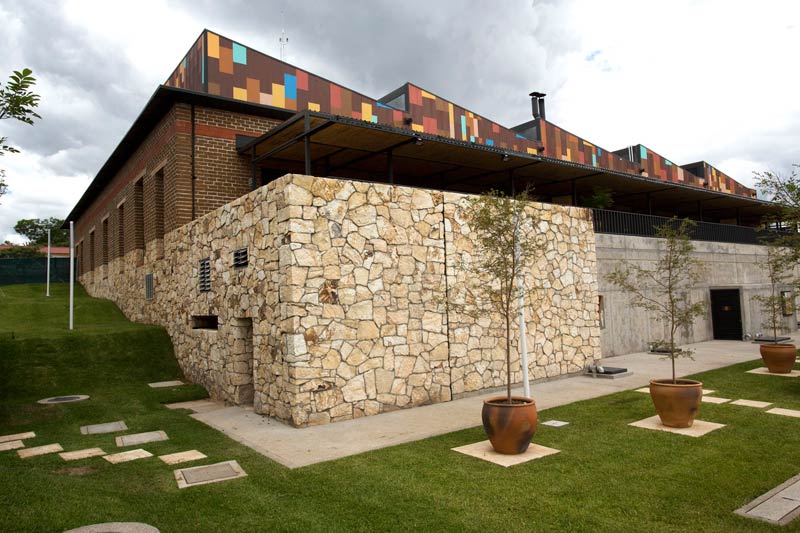 Oaxaca de Juarez, located in the southern Mexico, has an ancestral earth construction tradition that can steal be observed all around the city, in old and new structures. These methods resulted from the fusion of Pre-Hispanic civilizations with the Spanish tradition brought by the colonization in the 16th century. 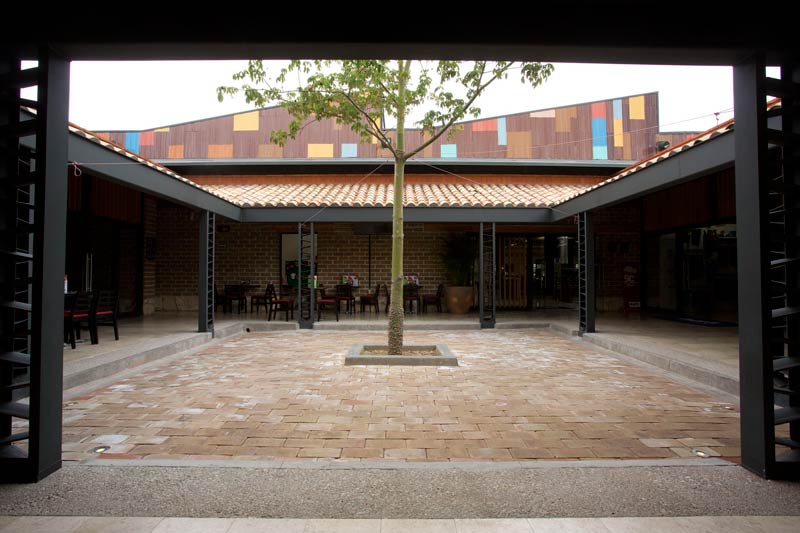 Besides the crescent deny for the natural techniques and materials, seen as unsecure, unhealthy and only adequate to the “poor people”, a large part of these methods have remained due to its vernacular application, mainly in rural areas. In other hand, it’s contemporary use is more related with the new “green thinking”, even more in the new generations, where people try to have more conscious and sustainable lives. In this case, Sport Center represents a good example of this kind of change; it belongs to a set of Mexican gymnasium, were the owners decided to risk a new approach to their line of buildings, approaching more to modern ecological trends. 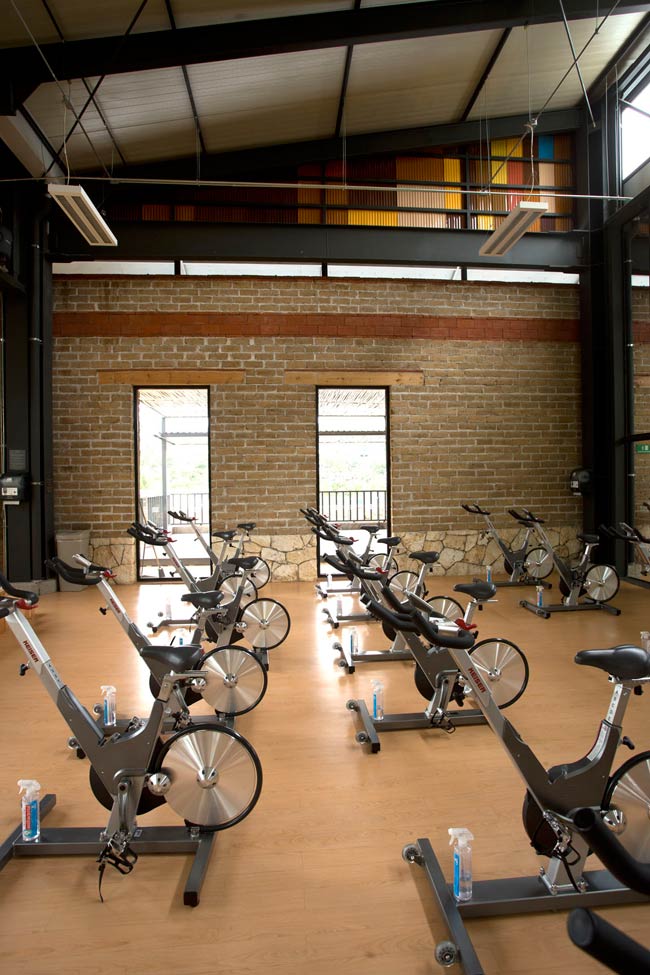 The walls of the main building are constructed in adobe: 33 000 adobes in coffee color, elaborated with earth from the zone, mixed with horse dung, sawdust and black clay, left maturing for three days to raise the quality of the mixture. The adobes were done by the handcrafts from local communities and the mortar mixture was recovered from the oldest habitant who remembered the exact place where his grandfather used to take out the earth to construct their houses at that time. Once more it was noticed the lack of trust in the materials, as it was necessary to realize laboratory exams (mechanical ones) to the earth and to the bamboo poles. These analyses assure the clients and the contractor that the material was safe and capable. In the earth tests it was proven that the earth Don Julio selected was the best one to be used. 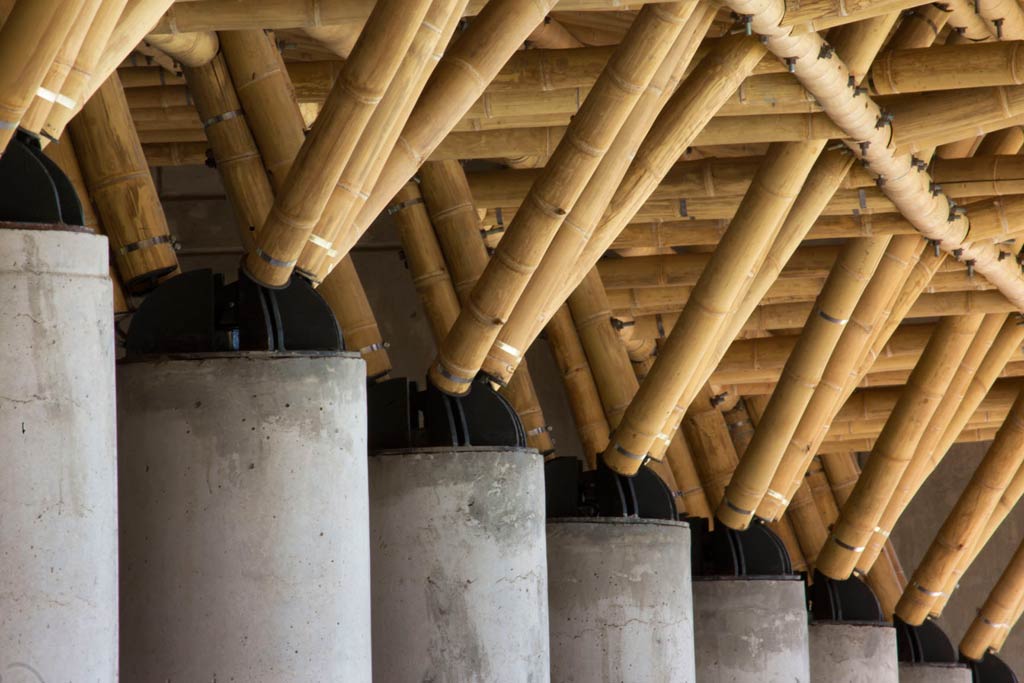 The load bearing walls have been erected on a stone foundation and basement that used 750m3 of stone, manually carved, and fixed with a traditional mixture of lime and sand in a 1:3 proportion. The adobe walls were used with all its potentiality, without the common vertical concrete reinforcements, to emphasis the enormous potentiality of the material where they are used properly, when its qualities and limits are respected. 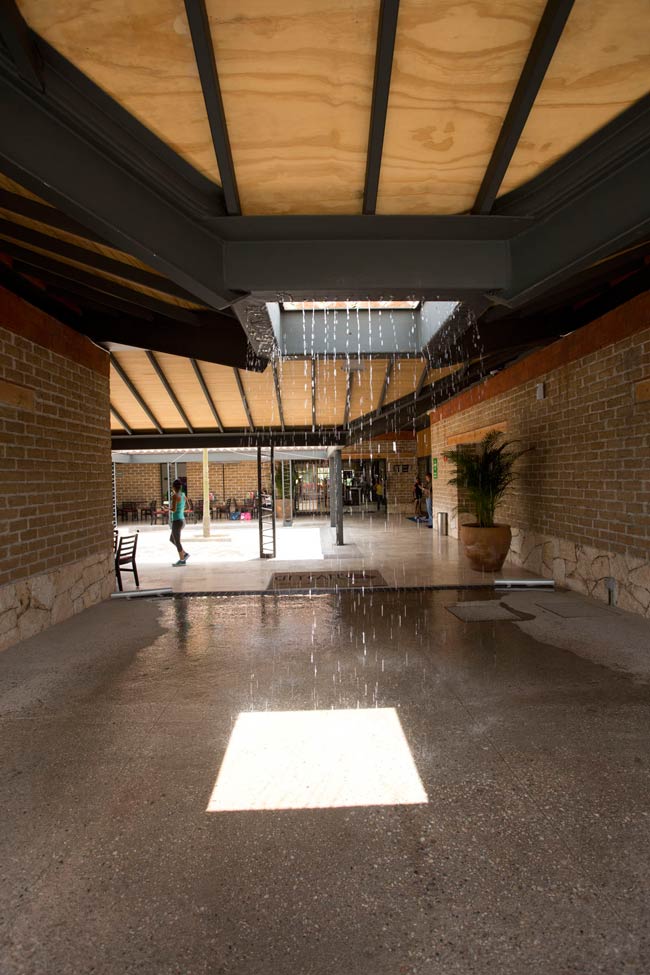 In fact, Oaxaca is a high seismic activity zone, so some measures had to be taken more seriously to respect the physical characteristics of the material towards the movements. Due to the length of the walls, it was left a joint in every 12m and the same measures were respected in the interior steel structure that supports the roof. In fact, these joints contribute as aesthetic contemporary image solution, that replaces the traditional buttress, an important element in a high seismic zone like Oaxaca. These columns are also separated 50cm from the walls to avoid contact during the movements. Other possible method is the introduction of reinforced concrete angles in the adobe walls that divide the walls in two parts/two weights and improve the connection between the angles. 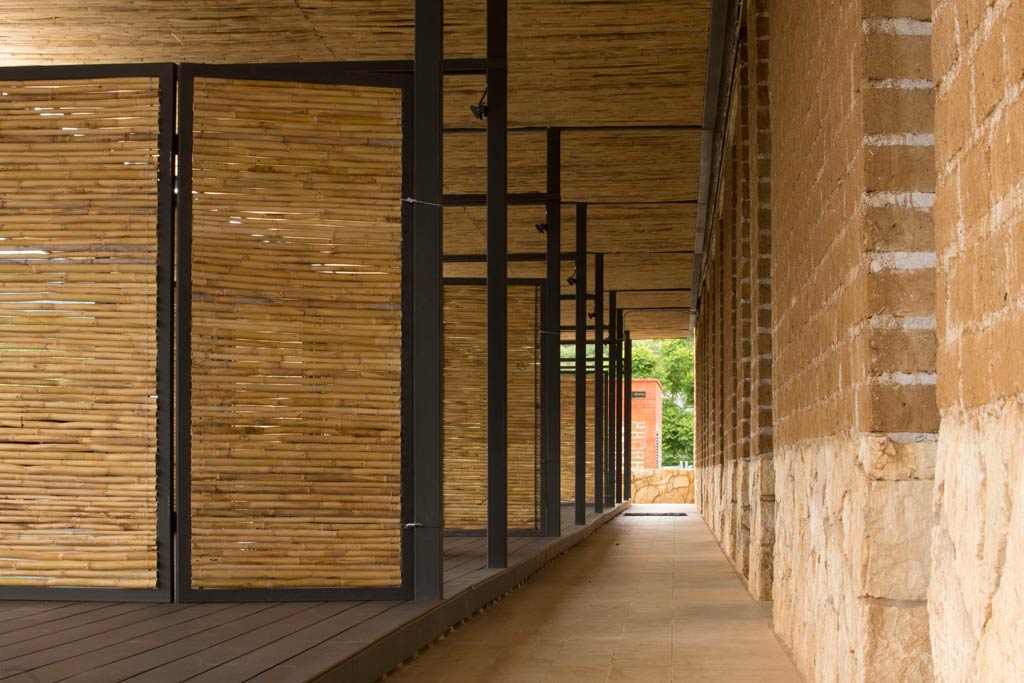 It was made a big effort to assure the times of construction in a way they could be competitive in the urban world. Traditionally, the adobe wall assented with earth mixture has to grow just one meter each time before it dries up, so it can consolidate and lose the same quantity of water without losing its structural homogeneity. To solve this issue it was used, once more, a mix of knowledge between the rural and contemporary techniques. It was used a mixture of sand and lime stabilized with 5% of cement, so it can dry more quickly and also give more security to the clients and the contractors. 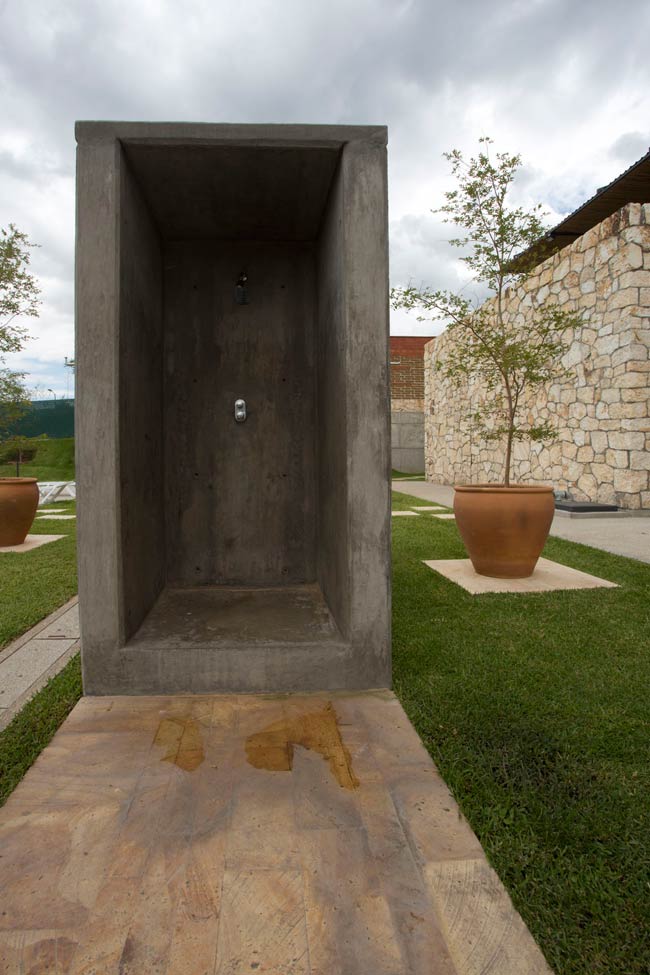 To close the lateral triangular openings created by the shed roof, it was taken inspiration from the rural and sub-urban low cost construction, using a thin metal sheet (coming from the tin cans in industrial production), commonly used to fence off land or little constructions. Cutting and painting the sheets was created a geometrical composition of eleven different colors that gives a contemporary aspect to the whole complex.

The big exterior bamboo roof was design between two buildings with different nature, one made of concrete and one made of adobe, a fact that gives even more emphasis to the possible aesthetic relation between such different materials. The roof was erected over concrete columns that connect with the bamboo by metallic connectors, developed specially to this construction. Between the bamboos, there are 2 kinds of connections that depend on the stresses that each element in their position was going to receive. Over the bamboo, it was fixed a plywood with screws that go through the bamboo trusses, joining everything together so all the elements work as one. The roof was finished with asphalt cardboard and artisanal tiles, made by a nearby community, to protect the wood and the bamboo from the water. 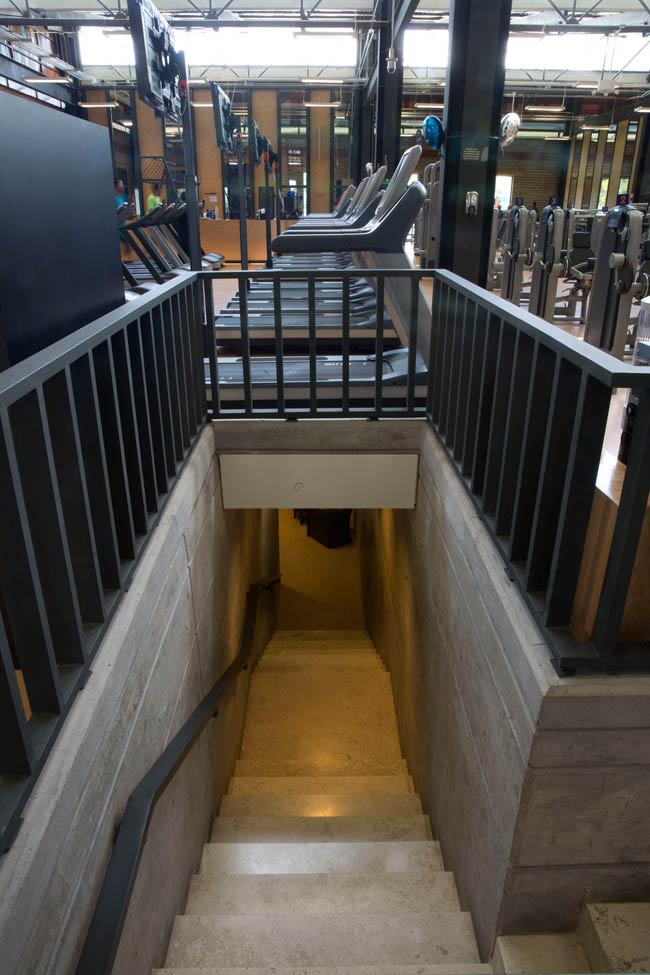 All the roof was constructed with the help of local university students, that have worked with the team since the beginning of the rural projects, 3 years ago. Besides the lack of trust by the specialized constructors, this situation had resulted from a necessity because none of the workers seemed to know how to work with that material. It was also necessary to search in nearby communities for some self constructors, some villages where was still common the “tequio system”, to help to finish the construction. In this way, the “knowledge circle” could really work: the academics, architects and students shared their knowledge with the local communities (city – village) and the village share its culture with the professional (village – city). 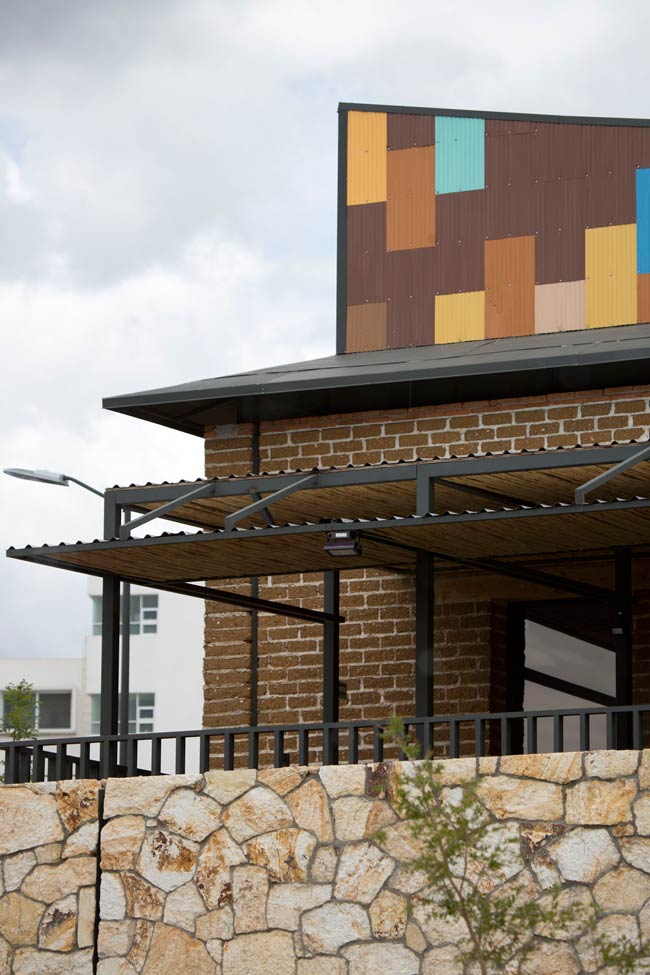 It is also important to notice that all the 140 000 red bricks and 22 000 tiles used in the complex were manually produced in local communities, and demonstrated to have more quality than the industrial ones. Each red brick or tile is unique as they have the fingerprints of the craftsman that makes them unique pieces, giving the construction humanity and esthetic quality. The revalorization and promotion of their own materials is also an important issue for the local communities, so its traditions can endure through time, helping the community development and giving back money to the rural world.
The whole complex was provided with water and energy feedback systems, using passive strategies as water collection (canalized and stored in underground tanks) and natural ventilation, created through an horizontal opening that runs all along the top of the adobe walls.

Through urban projects can be revitalized local economies instead of importing materials from other states or maintain the monopoly of big materials enterprises. This fact works not only towards social and architectural, but also cultural sustainability. One can see a change of paradigm, by fashion or not, it can really help the truth goal – the revitalization of the vernacular techniques in Oaxaca, protecting and developing an heritage that can be lost forever. 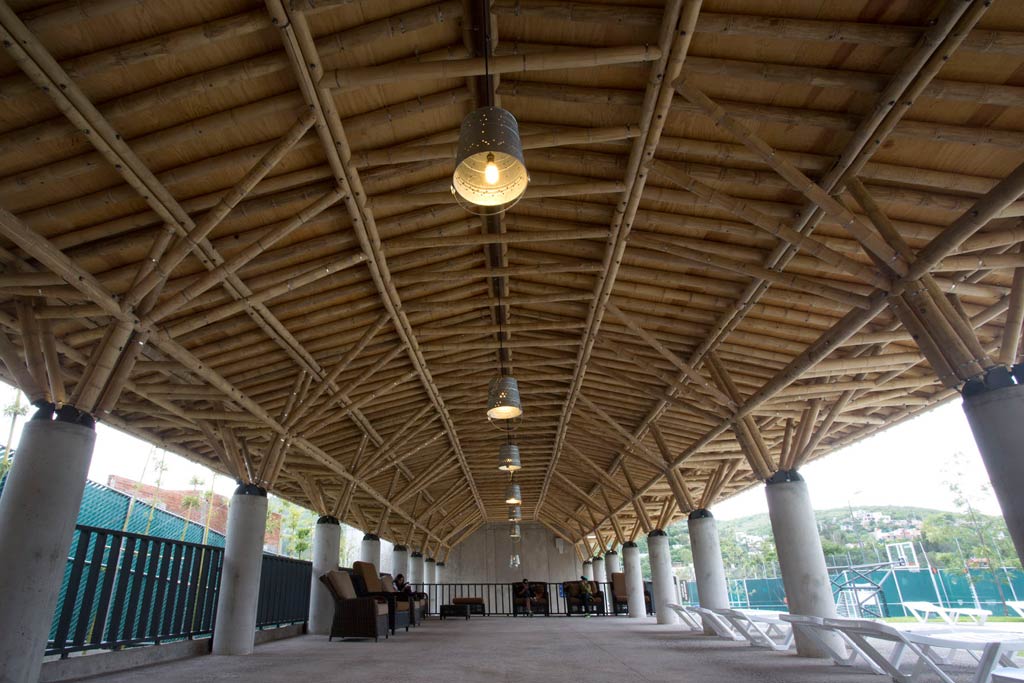 Sports City represents one of these examples that have been changing the paradigm of Oaxaca’s contemporary architecture; a building where the nature and the limits of the materials are respected without denying the possibilities of the contemporary materials and technologies – a fusion between low and high tech. Earth, stone, wood, bamboo, tiles, red bricks, lime, concrete, steel and metal leafs, are combined in an harmonic way that respects the potential, the limits and quality of each material.

The construction with earth and bamboo in Oaxaca appears as a pertinent solution, without denying the industrial materials, the mechanization of some processes witch create competitive techniques in terms of times and prices, joining knowledges and urban/rural technologies (academy/empiric truths), using a ecological, political and social vision.