Architectural tours are a great way to learn about a city you’re visiting as well as the one you live in. For those with in interest in modern design, the Vancouver Modern Home Tour is happening on Sept. 19, as part of Western Living Magazine’s Design Week. This will be its third year and as it proved so popular last year, organizers have added an additional White Rock Modern Home Tour on the following day, with five homes on each tour.

“It was one of the best tours of the year,” says organizer Ken Shallcross. “We had over 500 visitors. On our first tour we had about 250, so we had double the attendance. The participants were lovely and the homes were amazing.”

Modern Tours LLC was founded by James Leasure, in Austin, Texas in 2010, to introduce people to modern architecture in cities across the U.S. and Canada, with architects and designers who created the homes on site to chat to tour-goers.

In Vancouver, the five modern creations on the bill range from a “Cliffhanger” in North Vancouver to a 1,000-square-foot condo in the West End — the first time a condo has been included in the lineup.

“It’s for a young couple just starting a family and facing the questions a lot of people are facing in Vancouver, which is do we move outside of Vancouver to have the … upbringing we grew up with or do we make it work in a condo in Vancouver?” says architect Allison Holden-Pope, principal at One SEED Architecture + Interior who designed the space. […] 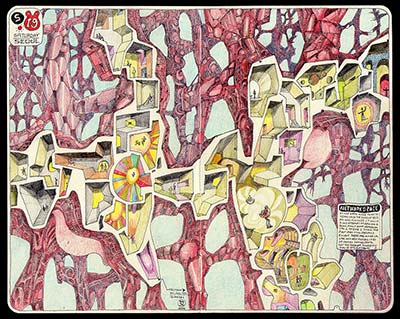 November 18, 2015
0
Anyone interested in the transporting power of architectural illustration should get on a plane to Chicago to see Doodle Constructivism