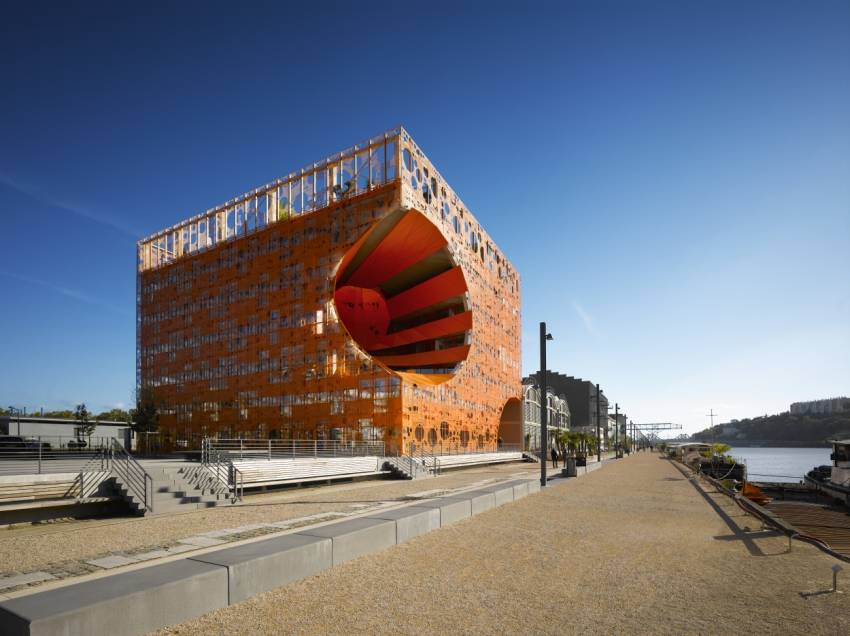 The ambition of the urban planning project for the old harbor zone, developed by VNF (Voies Naviguables de France) in partnership with Caisse des Dépôts and Sem Lyon Confluence, was to reinvest the docks of Lyon on the river side and its industrial patrimony, bringing together architecture and a cultural and commercial program.

These docks, initially made of warehouses (la Sucrière, les Douanes, les Salins, la Capitainerie), cranes, functional elements bound to the river and its flow, mutate into a territory of experimentation in order to create a new landscape that is articulated towards the river and the surrounding hills. 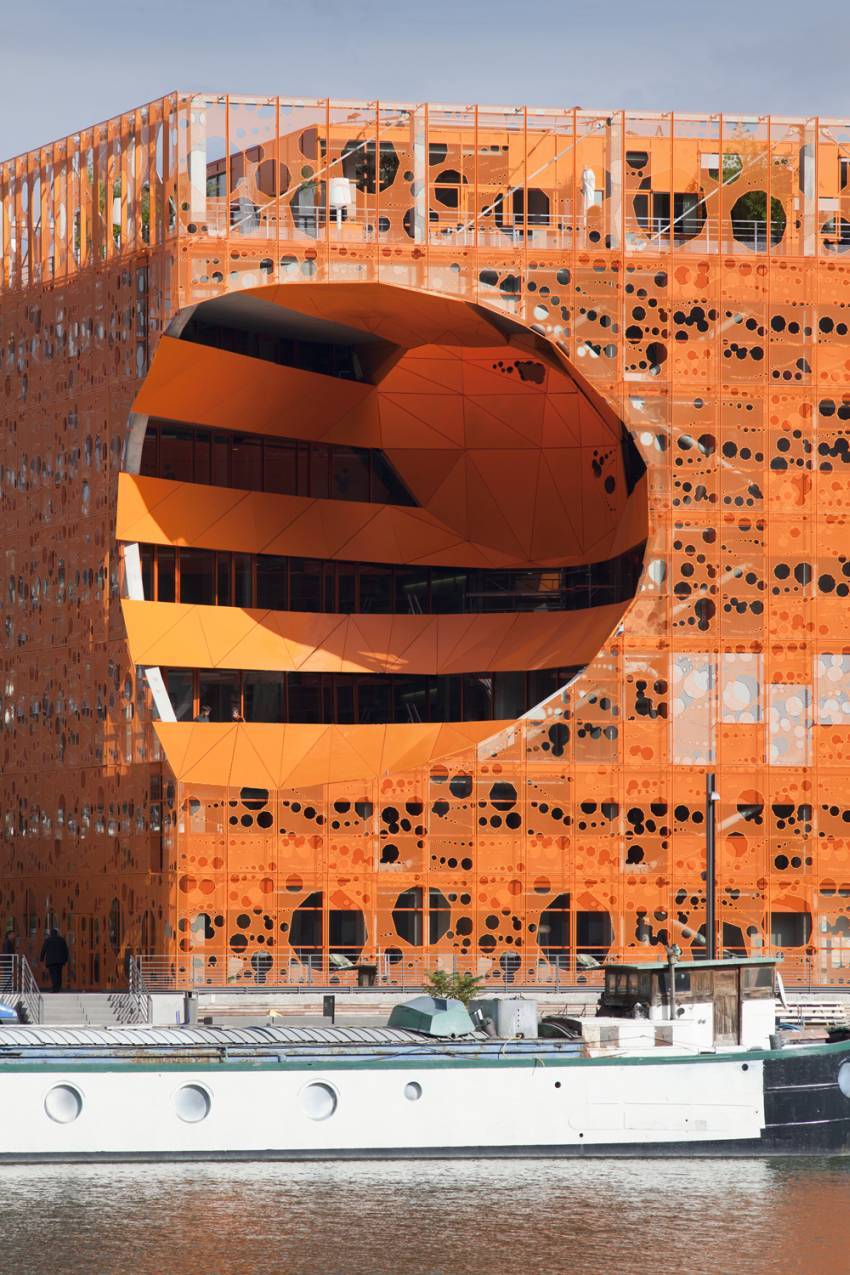 The project is designed as a simple orthogonal « cube » into which a giant hole is carved, responding to necessities of light, air movement and views. This hole creates a void, piercing the building horizontally from the river side inwards and upwards through the roof terrace.

The cube, next to the existing hall (the Salins building, made from three archs) highlights its autonomy. It is designed on a regular framework (29 x 33m) made of concrete pillars on 5 levels. A light façade, with seemingly random openings is completed by another façade, pierced with pixilated patterns that accompany the movement of the river. The orange color refers to lead paint, an industrial color often used for harbor zones. 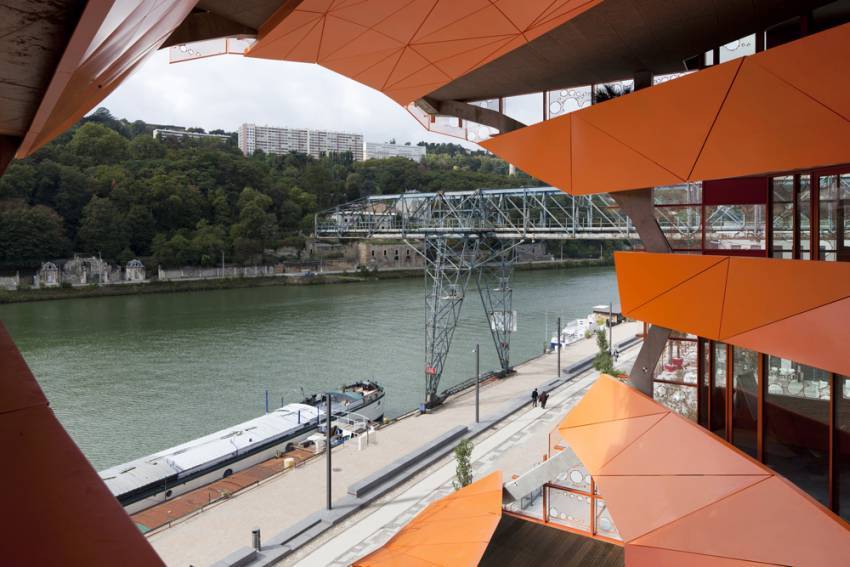 In order to create the void, Jakob + MacFarlane worked with a series of volumetric perturbations, linked to the subtraction of three “conic” volumes disposed on three levels: the angle of the façade, the roof and the level of the entry. These perturbations generate spaces and relations between the building, its users, the site and the light supply, inside a common office program.

The first perturbation is based on direct visual relation with the arched structure of the hall, its proximity and its buttress form. It allows to connect the two architectural elements and to create new space on a double height, protected inside the building. 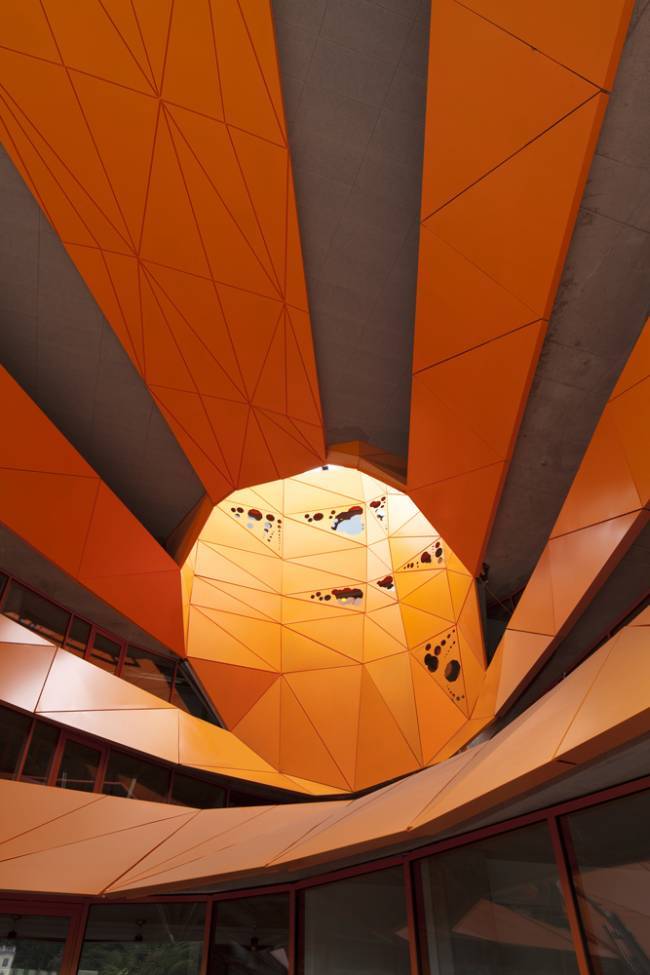 A second, obviously an elliptic one, breaks the structural regularity of the pole-girder structure on four levels at the level of the façade corner that gives on the river side. This perforation, result of the encounter of two curves, establishes a diagonal relation towards the angle. It generates a huge atrium in the depth of the volume, surrounded by a series of corridors connected to the office platforms. The plan of the façade is hence shifted towards the interior, constructing a new relation to light and view, from both interior and exterior. This creates an extremely dynamic relation with the building that changes geometry according to the position of the spectator.

The tertiary platforms benefit from light and views at different levels with balconies that are accessible from each level. Each platform enjoys a new sort of conviviality through the access on the balconies and its views, creating spaces for encounter and informal exchanges. The research for transparency and optimal light transmission on the platforms contributes to make the working spaces more elegant and light.
The last floor has a big terrace in the background from which one can admire the whole panoramic view on Lyon, la Fourvière and Lyon-Confluence. 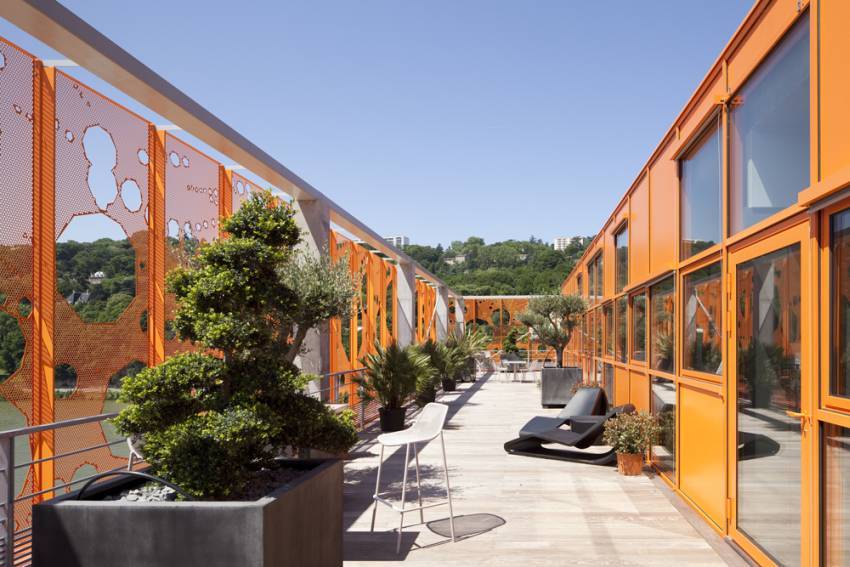 The project is part of the approach for sustainable development and respects the following principles:

Optimization of the façade conception allowing to reconcile thermal performance and visual comfort with an Ubat < 0,7 W / m2 K and a daylight factor of 2% for almost the total number of offices, a thermo frigorific production through heat pumps on the water level and the replacement of new hygienic air with recuperation of high efficient calories of the extracted air. 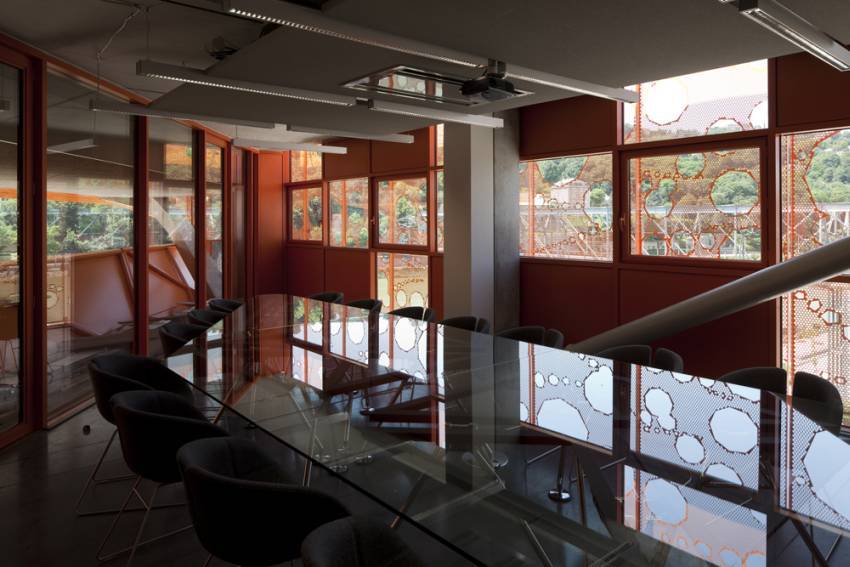 This project was about bringing together a showroom dedicated to the world of design objects inside the architecture of an existing building: « The Orange Cube ». The intention was to bring the worlds of Architecture, Design and the uniqueness of the site in Lyon together into one experience.

JAKOB + MACFARLANE decided to take the language of the Cube, which is based on the fluid movement of the River Saône and in a sense project this movement inside the space of the showroom. Thus imagining the space as an extrapolation of the façade, a virtual three dimensional river or volume containing a long porous wall whose 60 “alvéoles” are filled with furniture. This wall wraps around the space of the showroom forming an L. The spectator moves from the spectacular entry wall towards more intimate spaces on the river side. Each “alvéole” is unique in seize and form allowing thus an intimate and private view of each design piece.

The platforms on the floor, made from a series of kitset pants, imagined like islands, can become stages for different thematic presentations.