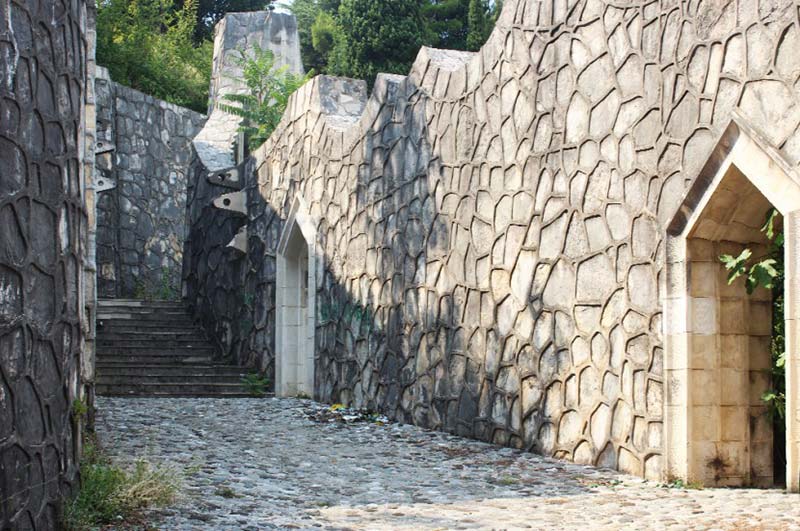 50 years after the conception of the Partisan Necropolis in Mostar, Bosnia-Herzegovina, the monument is too loaded with meaning to be left alone and too charged with emotion to be protected after the horrors and ruination of the war. Two architects from two generations reflect on the disintegration of the city and its symbol of unity.

The construction of the 16th-century Old Bridge in Mostar was the crowning achievement of the city. Mostar got its name from the bridge keepers, mostari, who from their towers would watch people entering the city via the bridge crossing the river Neretva (most means ‘bridge’ in the Serbo-Croatian language). The Old Bridge, designed by the Ottoman architect Mimar Hayruddin, was the symbol of the city. Mostar’s inhabitants regarded it as an old soul that connected two parts of the city together through a simple and friendly gesture. For generations it was the spot where couples would plan their first date and where the famous annual diving competitions were held. The city was the bridge, and the bridge was the city.

Exactly 400 years later, in 1966, the Partisan Necropolis to the west of the Neretva river was built. The monument, designed by architect Bogdan Bogdanović, is a cemetery-park commemorating 810 Partisans from Mostar. It is designed as a microcosm of the city of Mostar – a city of the dead, mirroring the city of the living. The cemetery has the same cobbled paths, alleys and gates that are so characteristic for Mostar. During the Second World War the city was known as the red city because it had a particularly strong antifascist resistance, of which the members were of Serbian, Croatian and Muslim ethnicity. Traces of this resistance can be found on the gravestones of the Partisan Necropolis, where the different names are distributed proportionally according to the percentage of the population representing each ethnicity at the time the monument was built. The monument was a public park that marked a new shared start after the Second World War. […]