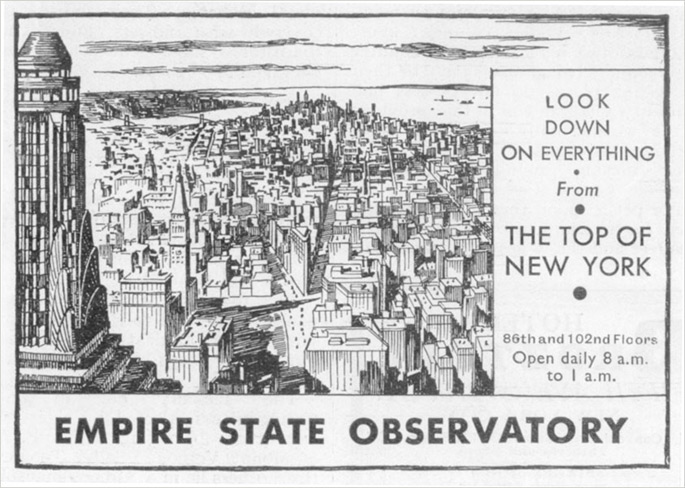 Known for its record-breaking height and sophisticated art deco style, the Empire State Building is one of New York City’s most recognized landmarks. While the building is often used in popular culture as light-natured fodder—such as the opening backdrop to your favorite cookie-cutter rom-com or the romantic meeting spot for star-crossed lovers—the building’s past is far more ominous than many of us realize. From failed suicide attempts to accidental plane crashes, its history casts a vibrant line-up of plot-lines and characters spanning the past ninety years.

The Eiffel Tower, measuring 984 feet, was built in Paris in 1889. And as many French things do, it taunted American architects with its lofty height. The French feat challenged Americans to build something even taller, and its completion marked the beginning of the twentieth century’s great skyscraper race.

Prior to the Empire State Building, the U.S. line-up of tall towers included the Metropolitan Life Tower at 700 feet built in 1909, followed by the 729-foot Woolworth Building in 1913, and finally the 927-foot Bank of Manhattan Building in 1929. […]

May 12, 2017July 11, 2015
0
Tulou buildings are some of the China's most stunning historic structures and Lin Lusheng, who grew up in a tulou, is on a mission to shine new light on the intriguing design