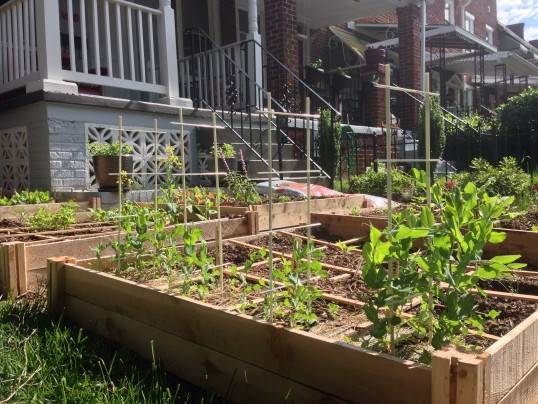 I opened the e-mail in April with trepidation. Attached were the soil-test results I had sent away for weeks earlier, before I had planted peas and lettuce and kale and more as part of my 150-square-foot experiment in front-yard gardening.

The news from the University of Delaware wasn’t good. “This site shows significant contamination with lead,” the report said — 472 parts per million, to be exact. That led to the underlined instruction: “This soil should not be used for vegetable gardening.”

As anyone who has bought or sold a home in the past few decades knows, lead contamination is possible in any home built before 1978. Urban gardens have another source of possible lead contamination if they’re near roadways: fumes from gasoline before we switched to unleaded. Most of the concerns around lead involve children playing directly in the dirt, where they might ingest not only contaminated soil but even flakes of lead paint. Problematic soil can get stirred up by gardeners tilling, tracked into the house on shoes and, apparently, ingested in the form of produce grown in it.

That’s why experts caution gardeners to get their soil tested, and to take precautions if it comes up higher than 400 ppm. Among the suggestions: Raise the acidity of the soil to help bind the lead and make it less available; avoid leafy greens and root crops and focus instead on fruiting vegetables (tomatoes, eggplants, squash and the like), which apparently are less likely to pass along lead in their edible parts; and/or grow in containers or raised beds in new soil.

May 21, 2016May 24, 2014
0
The restaurant is located in a set of houses built in the forties, in a block of the Polanco neighbourhood in Mexico City