Monorails, shipping containers and nuclear waste dumps are just some of the ways that US construction companies have interpreted Donald Trump’s call for an “impenetrable, physical, tall, powerful, beautiful wall” to march 2,000 miles across the country’s border with Mexico. Up to 400 bidding contractors were expected to submit their schemes this week to the US Customs and Border Protection agency, in a militarised beauty pageant worthy of one of Trump’s own reality TV shows.

The parameters for proposals were as surreal as the idea for the wall itself; the solicitation notice tinged with the characteristic Trump cocktail of bluster, confusion and backtracking.

Rules state that the wall must be tough enough to withstand attacks from “sledgehammer, car jack, pick axe, chisel, battery operated impact tools … propane or butane or other similar hand-held tools” for up to four hours, but also be “aesthetically pleasing” – although obviously only on the northern, US-facing side. It must be “physically imposing in height”, ideally 30ft, but the terms also state that shorter options of 18ft “may be acceptable”.

After the initial callout, a second request for proposals was published with an option for the designs to have “a see-through component”. As many predicted, the great impenetrable wall might simply end up being a mesh fence. If it even happens at all.

From a first look at some of the entries, it’s hard to tell which ones are spoofs. Alarmingly, on closer inspection, it turns out that very few are. Instead, they are the fever dreams of America’s small-business contractors writ large, which makes them a fascinating window into the lurid anxieties of middle America. […] 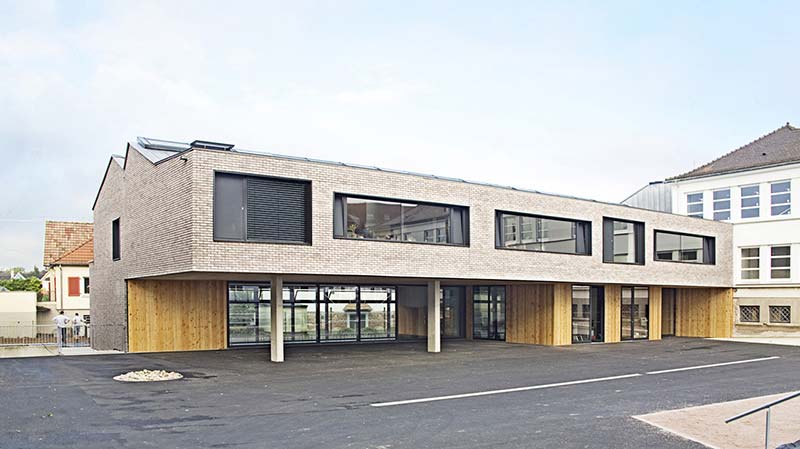 December 4, 2015April 11, 2017
0
Aristide Briand Primary School is located in the historical city center of Benfeld, a small city of 5.000 inhabitants in the East of France.