Several hundred years of history of Chwaliszewo Bend was inseparably connected with water, but due to the actions undertaken in the 60’s, this relationship has been interrupted. In the past the old bed of Warta River was associated with the industry, logistics and defense. Future plans, according to city authorities, are to transform the area into places with greenery and recreation. 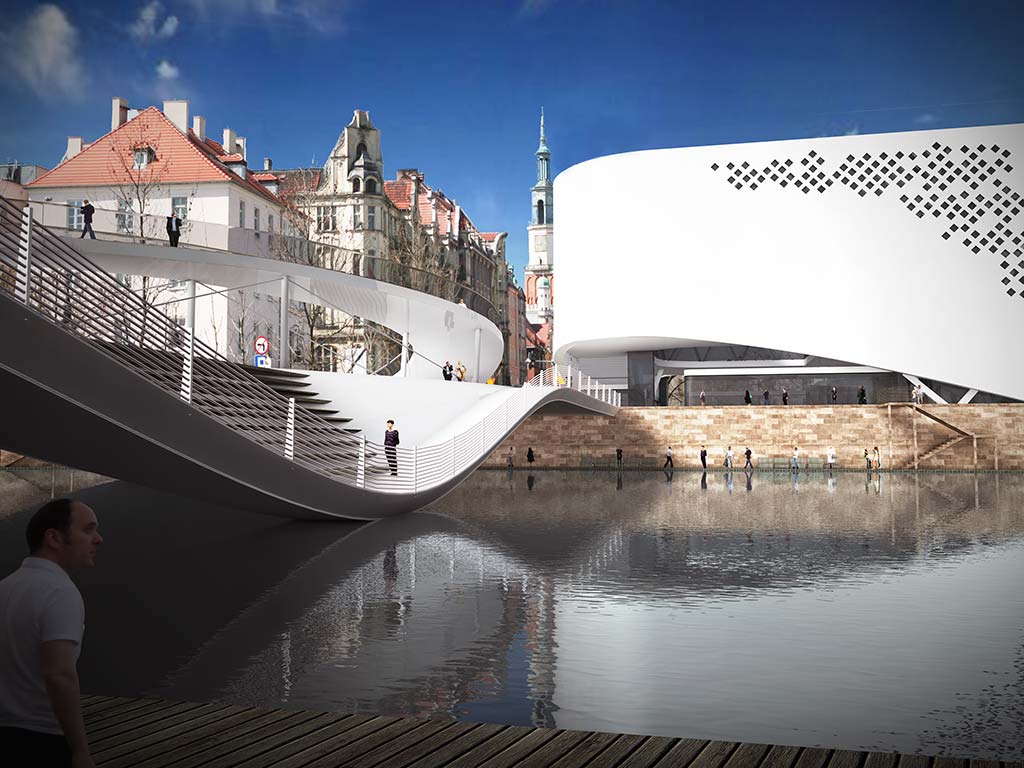 The mission of Water Pavilion project is not to ask questions whether to restore or not the old course of the river, but rather to remind the people of the history of this place.

Creating Water Pavilion at the exact place of old Chwaliszewski Bridge is a consistent implementation of the strategic program for Poznań called “River in the city.” This program aims to create a “River Park” in the old riverbed of Warta that consists of a square / meeting place allowing the organization of cultural events.

The location of Water Pavilion is not accidental. The concept is to confront the newly design building with the history of the place, in order to awake the imagination and encourage a passer-by to ask questions.

The pavilion is situated on the so called “Imperial Route” and will act as the next stop between City Hall and Ostrów Tumski Island, telling the story of the Warta River, so closely linked to the history of Poznań. Water Pavilion consists of two overlapping interrelated parts: exhibition space and a pedestrian bridge linking the old left-bank of Poznań with Chwaliszewo Island.

Important objectives of the project are:
1. MEMORY – recall the history of the city along with Chwaliszewo Bend in a way that intrigues and stimulates the imagination

2. ANIMATION of the process of revitalizing the old riverbed of Warta River by implication of new features

4. OPENNESS, an easy access enabling the free pedestrian flow. The form of Water Pavilion is an effect of these four assumptions.

5. Water Pavilion’s form is like of semiotic sign. Its shape refers to the waves observed on the water and variable silhouette of the river in the past.

The project, by implicating new functions, is designed to stimulate the process of revitalization of Chwaliszewo Bend. Partial introduction of the water recalls the history of this place and awakens the imagination of the citizens. It shows how bringing the river back to the city can affect its image. The last, but not least part of the project is its versatility.

The bridge is designed in such a way, that no future reconstruction will be required, if there is ever a need of reintroducing big water to complete Chwaliszewo Bend.

The form of the bridge creates an amphitheater open to architectural space and figuratively on the history of the place. Water is the main background for the stage where art events may take place, similarly to the square Pompidou in Paris and at the Lisbon Expo.

The formation of the amphitheater, the shaped bridge will ensure continuity of the Imperial Route stretching between the Cathedral and the Old Market Square, as well as will preserve views from Chwaliszewo Str. towards the cathedral and the Town Hall.