What Are the Key Design Elements Securing the Future of Casinos?

When you consider that the online casino industry is experiencing a global surge in popularity, it is becoming increasingly important for bricks-and-mortar casinos to stay relevant and interesting. Architectural design can play a key role in creating unique experiences for land-based casino-goers. The millennial generation aren’t content to accept the norm. They want immersive, sensory experiences that take them out of their comfort zone and into stimulating environments.

Even the iGaming sector is recognising the need to incorporate architectural design elements within its online casino action. In recent years, Macau has rapidly emerged as the global leader for casino revenues, with its high-end casino floors inspiring iGaming software developers to replicate these Asian casino environments with themed table games, video slots and even virtual reality (VR) games helping iGamers feel like they are getting a true land-based experience without the physical constraints. 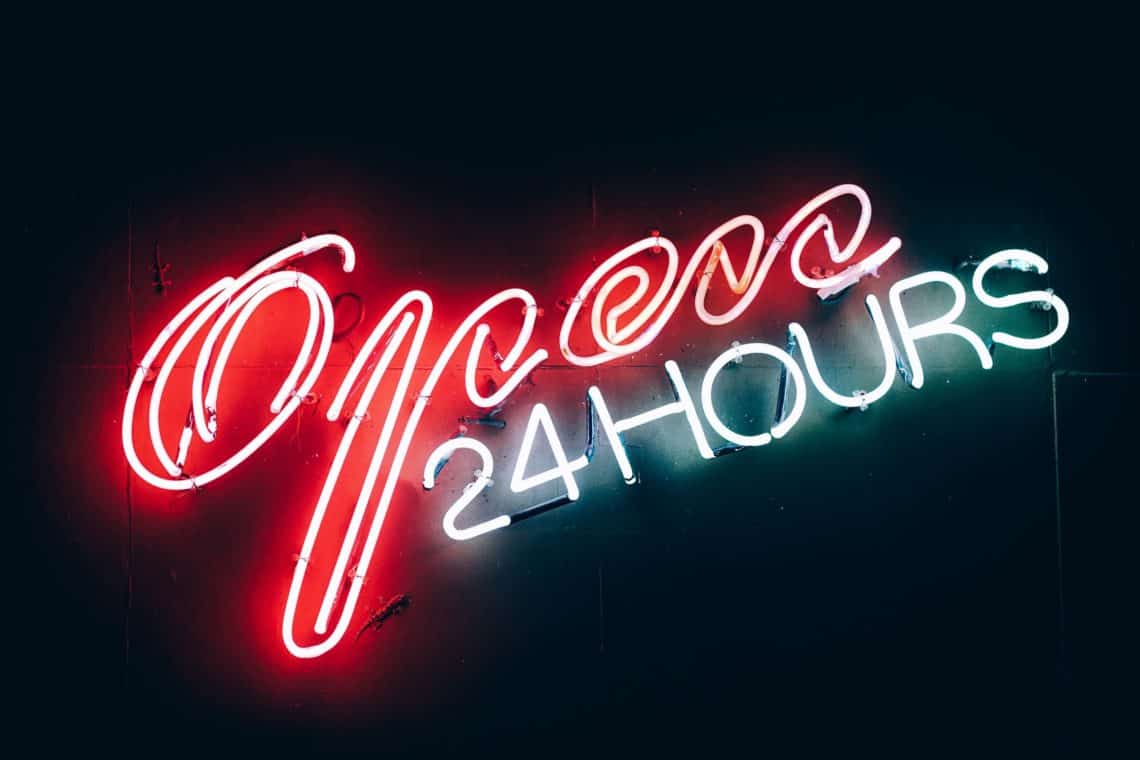 With the booming iGaming market increasingly in the foreground rather than the background for land-based casino operators, how have the latest bricks-and-mortar casino developments sought to excite and delight their visitors using architectural features and sensory experiences?

The $1.4 billion MGM National Harbor resort has become a genuine attraction for locals and tourists alike. Situated due north of National Harbor’s picturesque waterfront district, architecturally, the hotel and casino is stunning. Its clean lines and abundance of glass windows helps to create an iconic design statement that drivers on Woodrow Wilson Bridge can see every day. In terms of design elements, the white exterior of the other parts of MGM National Harbor are very much in keeping with the marble used throughout Washington DC. 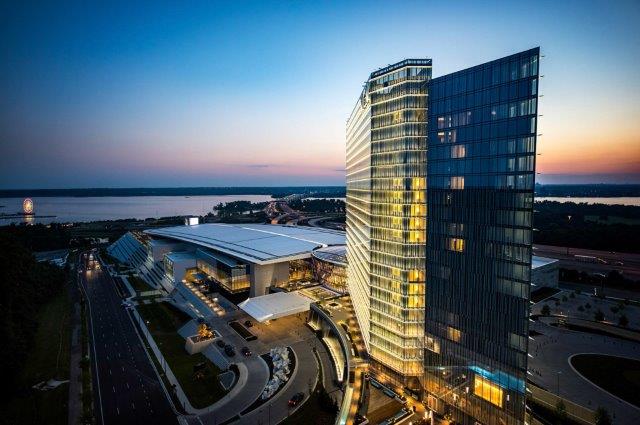 The developers of MGM National Harbor also managed to find a unique way to connect the resort’s design to the cultural roots of the Washington metropolitan district. A collection of local sculptors, artists and photographers were hand-picked by none other than iconic musician-turned-sculptor, Bob Dylan to form part of a 25ft x 15ft iron archway, acting as the western entrance to the resort. Dylan has been producing iron pieces for family and friends for many years, but this was his first commercial piece commissioned by MGM National Harbor. It incorporates “found objects” such as local farm equipment, wheels and axes to help communicate the spirit and personality of Oxon Hill.

When it was unveiled to East London’s masses, Stratford’s Aspers Casino was dubbed the UK’s largest land-based casino in terms of gaming floor space – 65,000 square feet to be precise. On the face of it, a new casino in Europe’s biggest shopping centre, Westfield Stratford, would not normally set the pulses racing, but there are many intriguing design features that keep visitors to Aspers Casino coming back for more. 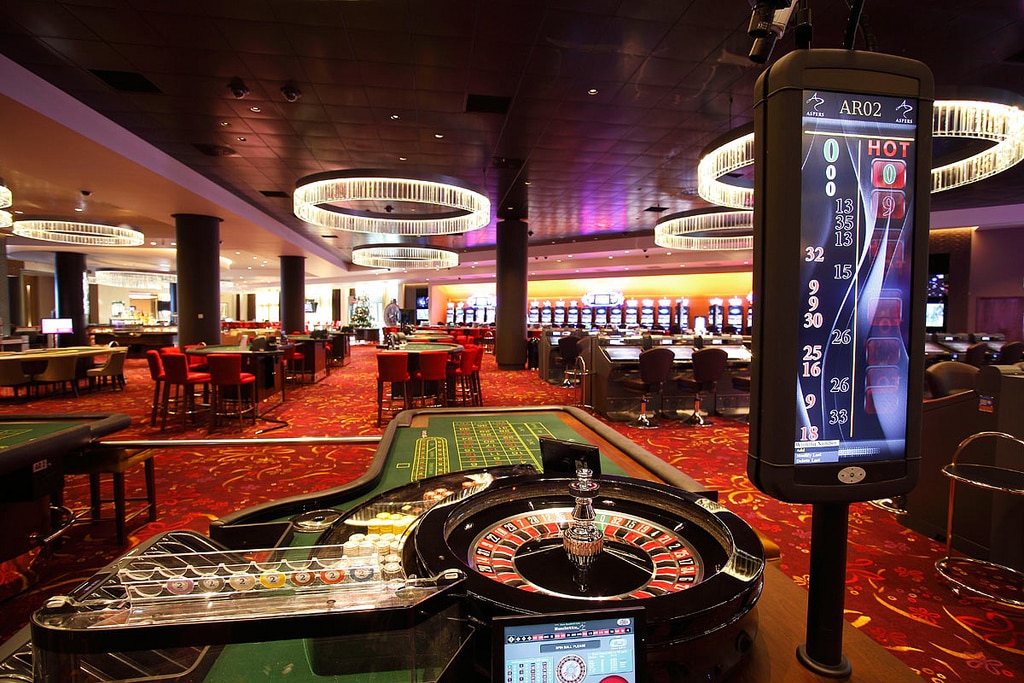 Upon arrival, you are treated a feast of large dangling copper lights that are contemporary, whilst harking back to the industrial roots of East London. Scores of chandeliers can also be found, creating an air of exclusivity in an area that was in the midst of significant regeneration in time for the London 2012 Olympic Games. Speaking of London 2012, the proximity of Aspers Casino to the Stratford’s Olympic Stadium meant that the casino’s architects were keen to maximise external views of the Olympic Stadium and the surrounding parkland. This expansive scenery further serves to enhance the sensory experience of visiting and playing in Aspers Casino.

The Durham Live project has been billed as one of the most exciting land-based casino projects in Canada to date. Once completed, Durham Live will become the premier entertainment and tourism district for Ontario, anchored by its stunning resort casino. Not only will Durham Live create 10,000 jobs in Pickering, 2,000 of which will be in the casino alone, the artistic concepts portray a landmark resort. The “casino district” will be connected to Durham Live’s “Go Train”, ensuring Durham Live is easily accessible to the wider Pickering community.

Although construction has not yet started on Durham Live, development plans received approval in 2017. The Durham Live casino will have a Las Vegas-inspired entrance with a Grand Fountain akin to Nevada’s Bellagio resort. The curvaceous, glass-fronted building that will house Durham Live’s casino and five-star hotel is similar to that of MGM National Harbor. It is clear that exclusive gaming and accommodation resorts will demand an abundance of natural daylight in 2022 and beyond. Consultants have recently been hired to help expedite construction works, with a launch date for Durham Live hoped for within the next 12 months.

Thousands of miles from Ontario, another long-awaited casino resort development has been in the offing. Vietnam has long been a nation which has taken a hard-line stance against land-based gambling, but a landmark move in 2017 saw the Vietnamese government soften their position and agree to operate a pilot program at the Corona Resort and Casino. 202,361 square feet of gaming floor space has been created in Phu Quoc, with this long-awaited premises the first in Vietnam’s three-year pilot to offer table gaming, slot machines and electronic gaming to locals aged 21 and above. 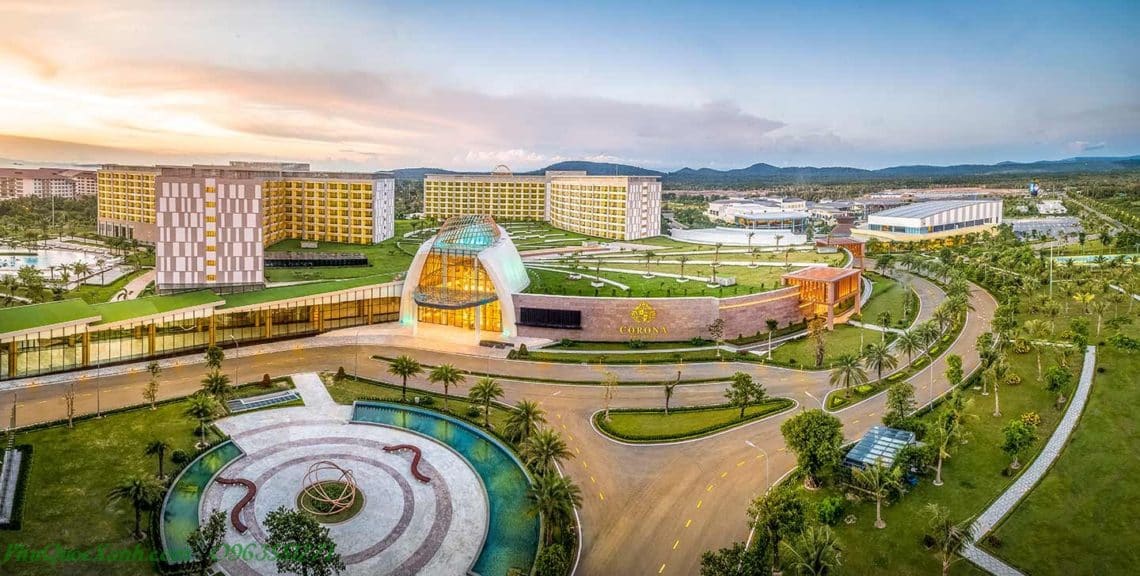 The Corona Casino and Resort is due for construction on the 569 square kilometre island of Phu Quoc, a tiny island in the Gulf of Thailand that is renowned for its National Park. More than half of the island is attributed to the National Park, with its tropical, evergreen forests and white-sand beaches. To create an exclusive casino on this idyllic island would seem difficult to achieve without looking like an eyesore. Yet the project’s architects successfully opted for green, living rooftops to help the building blend in with its lush, mountainous surroundings. It just goes to show that contemporary architecture can still be sympathetic to existing buildings and landscapes.

Although the Aquis Great Barrier Reef Casino proposals were eventually canned, it is worth discussing the ambitious multi-billion-dollar resort that is being built on the Great Barrier Reef, which is designed to attract tourists from Asia and even further afield. The Aquis resort is set to have no less than nine luxury hotels on the reef, along with a golf course, sports arena and reef lagoon. The decision to temporarily put aside plans for a casino in the development was to fast-track the remainder of the project. 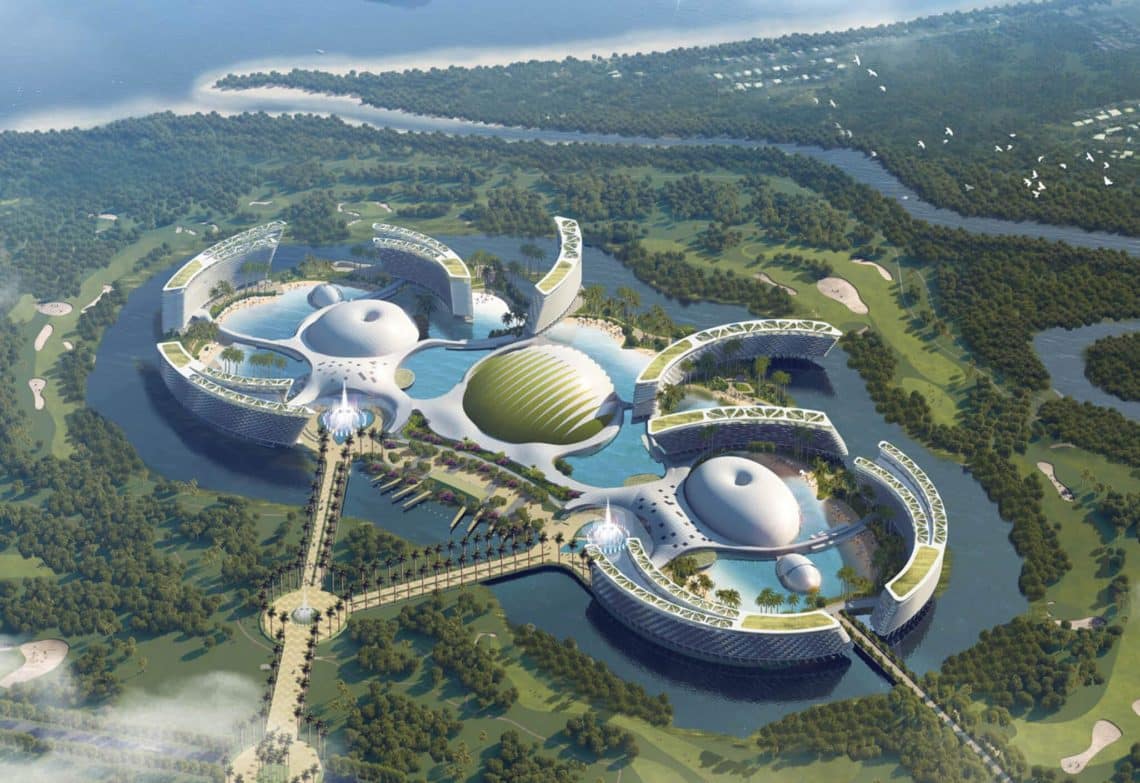 According to artist’s impressions, the initial proposals for a casino at the Aquis Great Barrier Reef saw a large flowing column acting as the centrepiece for the casino floor. Reports suggest plans for the casino could be picked up at a later date. As you can imagine, building on the Great Barrier Reef has required a lot of design consideration for its nine hotel resorts. It was decided to build the resorts on a special ‘podium’ to elevate it above the risk level for storm tides and, worse still, tsunamis. Even the golf course will have a sea wall built to act as a last defence against water erosion.

Ultimately, the newest land-based casino projects are having to raise the design bar higher than ever before to continue to make a splash in the tourism sector.