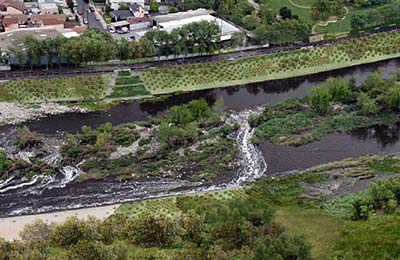 There was a time when the Los Angeles River was in danger of becoming a freeway. In 1988, California Assemblyman Richard Katz proposed exactly that. He figured that by turning this concrete drain system of a river into a freeway would ease traffic congestion on the Ventura and Long Beach freeways by as much as 25 percent . A preliminary report showed, Katz wasn’t off the mark. The river could support traffic lanes and congestion would be eased, but it would cost $30 million per mile.

Instead of catalyzing the construction of a freeway, however, Katz instead kickstarted advocacy for keeping the river. Just as darkness emphasizes light, former Mayor Tom Bradley eventually opposed the plan, advocating instead for a river restoration. Instead of concrete and trash, Bradley imagined parkland and open space, trails and bikeways. He eventually appointed a taskforce in the 1990s that would study turning the river into a recreational amenity.

That was almost three decades ago. Since then, advocates for the river have only grown more vocal and active. A masterplan for the river was approved by city council in 2007 containing about 240 projects that would be built within 20 to 50 years . The waterway has been included in President Obama’s America’s Great Outdoors initiative, as well as Urban Waters Federal Partnership program . From a concrete ditch, the river is now, very, very, very slowly becoming that green, recreational space many supporters have imagined. But, the question is, what’s taking so long?

As anyone who’s ever set out to build in Los Angeles knows, things aren’t always as simple as they seem. A vision becomes reality at a glacial pace, which can be a good or bad thing. […]

Power to the postwar: architecture’s most scorned era finally gets some...

April 30, 2017December 4, 2015
0
It may not have given rise to many beloved landmarks, but this week, 14 office blocks from the postwar era got listed status. And they’re an innovative bunch, from a space-age tower of Pisa to the hanging gardens of Basingstoke