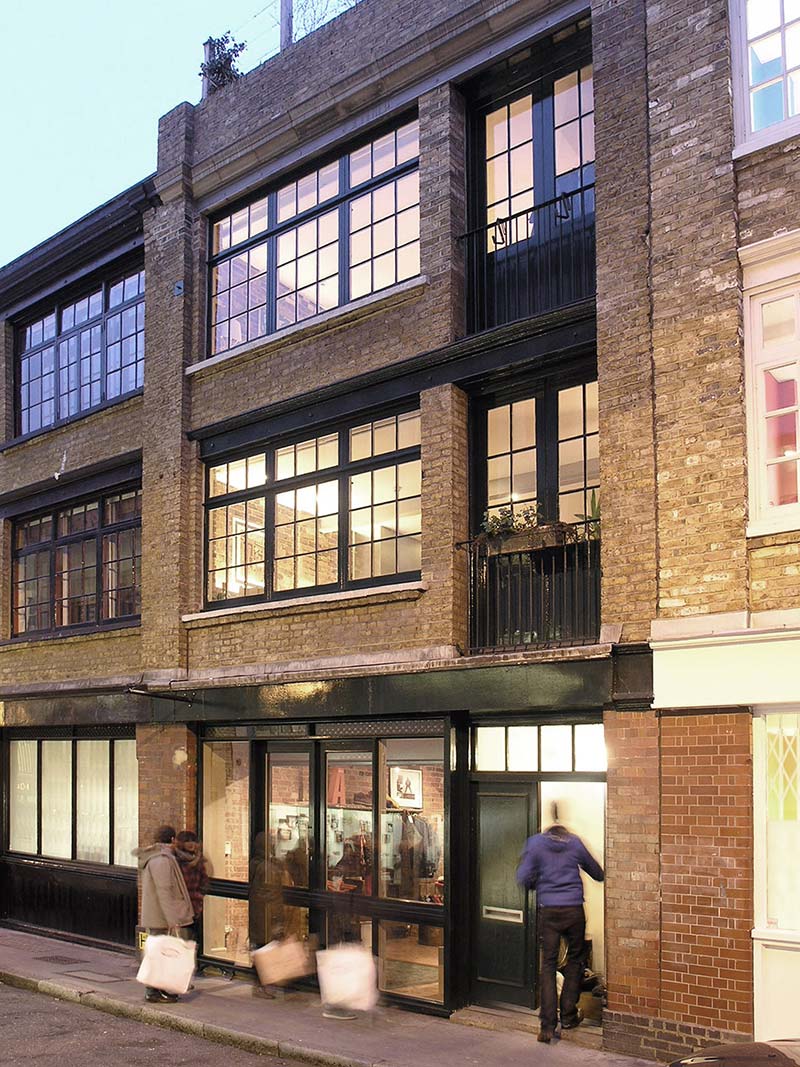 The building at no. 3 Charlotte Road has an interesting history. Like many of the streets around Shoreditch, it was built in the late nineteenth century as a merchant’s warehouse in the industrialised East End of London, and is arranged over three stories with cargo doors at first and second floor level. It served this purpose until it was sold off in the 1970s. Since then it has been used by two notable occupants who both left their mark on the place. The dance group Orbital used the building to record their music, converting the first floor into a sound-proofed recording studio. The building was subsequently bought by Charles Thompson, co-founder of the Stuckist Movement, who lived there and used the building as the headquarters for Stuckism International – an organisation promoting figurative painting over conceptual art. 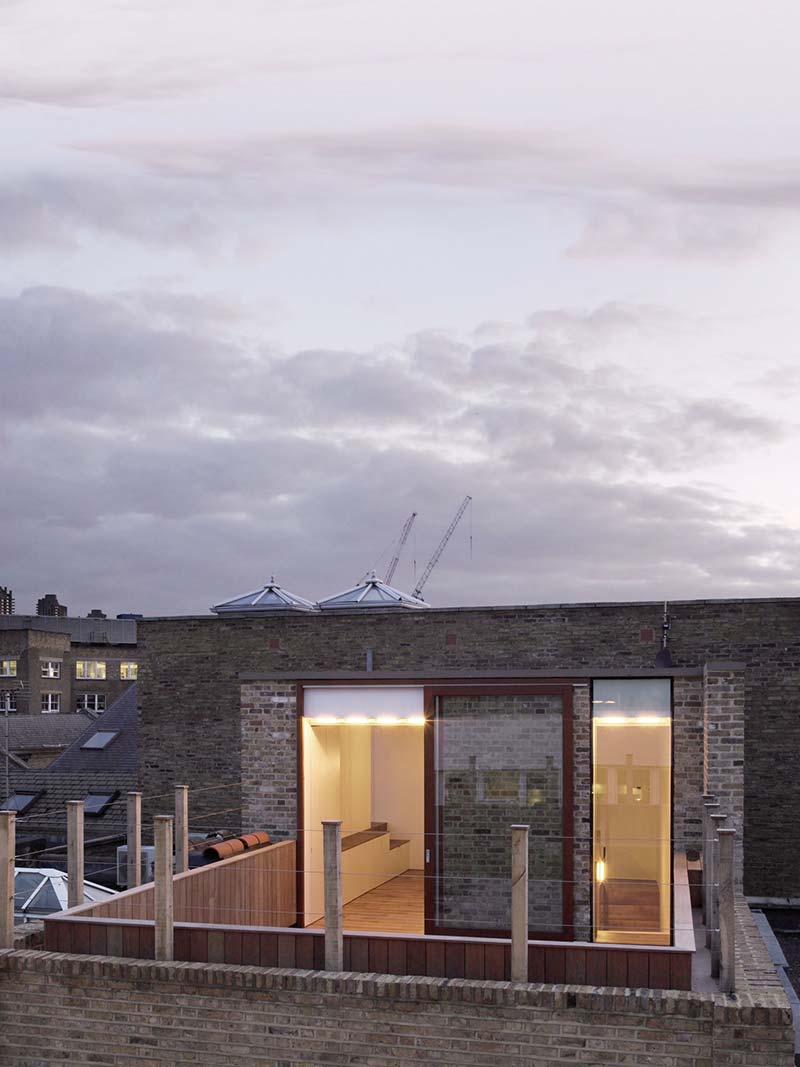 Interesting though the previous inhabitants were, the building had become badly neglected. It was cold, leaking in places, rot had set in on the joists and windows, the roof parapet was unstable and the steel and concrete roof was dangerously corroded.

With the building in such condition, our client was resigned to taking much of the building apart and starting again from scratch. The roof had to be removed along with half of the existing front façade to remove and re-build the deteriorated steels and windows. This presented the opportunity to build another floor above the existing roof level in addition to the complete refurbishment of the property. 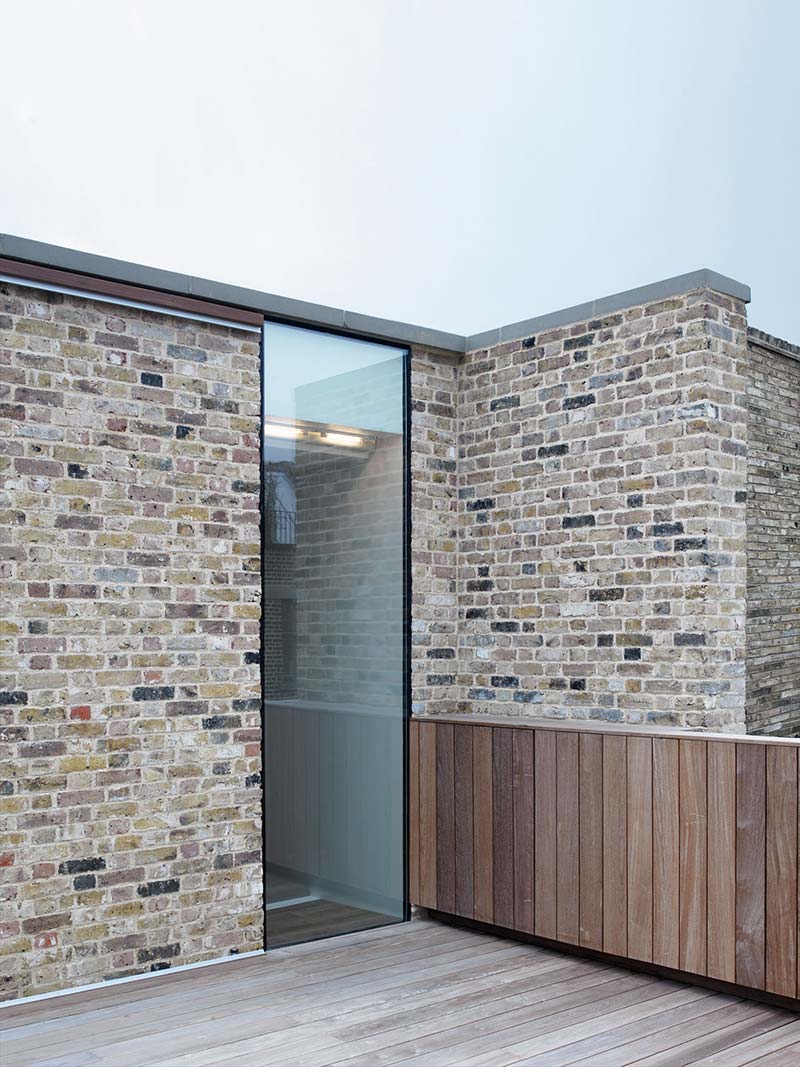 The building lies in the Shoreditch Conservation Area, so the design for the new third floor had to be invisible from street level. Fortunately this tied in with our brief, which required a substantial roof terrace and general studio space at third floor level. 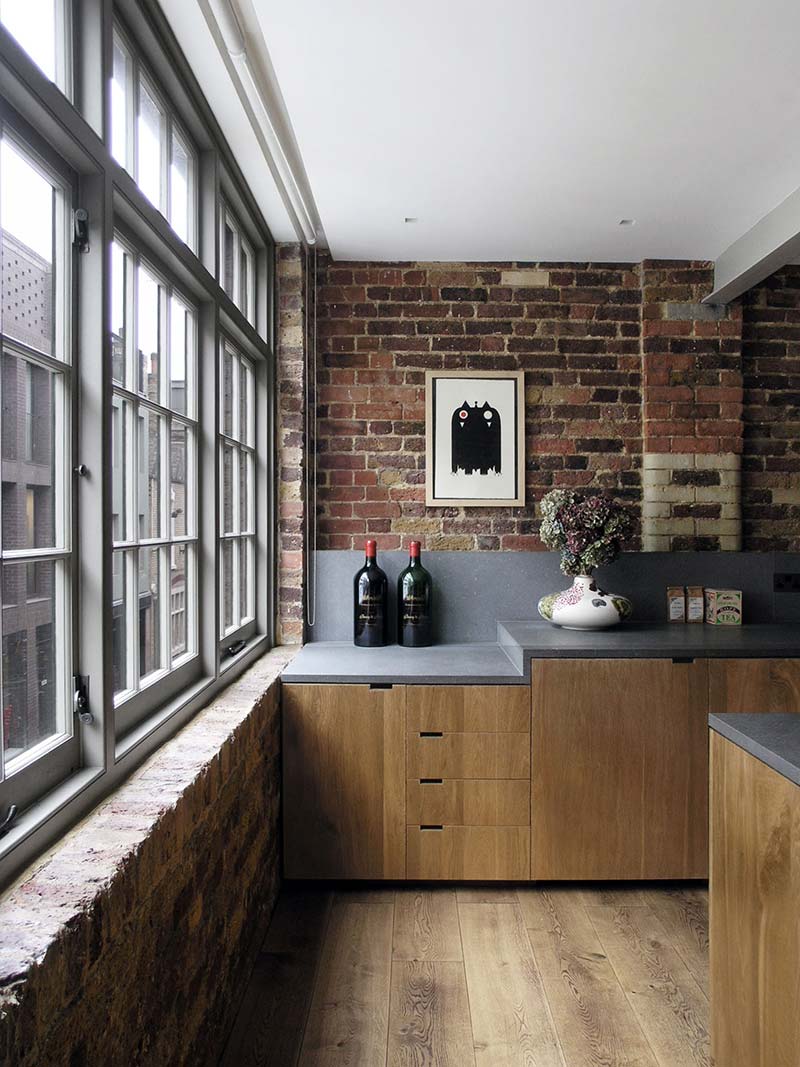 The obvious decision was to bring the terrace to the front of the building and push the studio back to the rear party wall and well away from street view. This arrangement narrowed down the options for the layout on the first and second floors, particularly with the new staircase required to access the third floor. 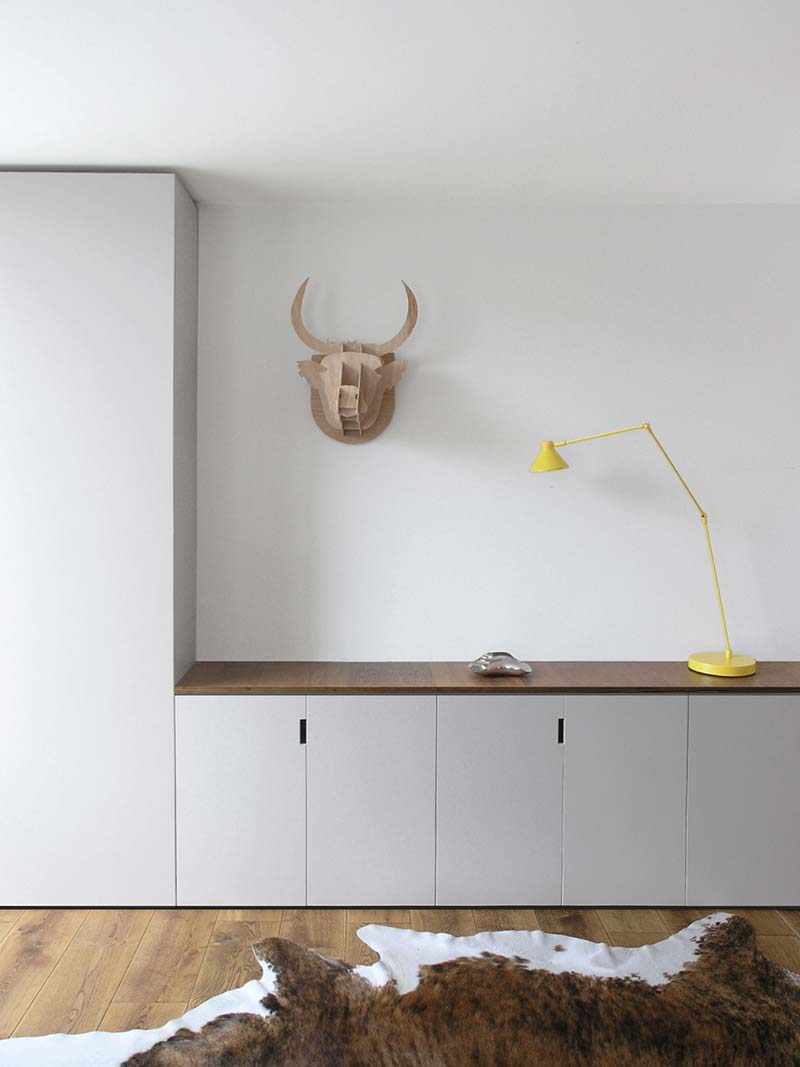 Furthermore, we were not permitted to run any services down the front façade of the building, which dictated where the bathrooms would have to be positioned. These constraints resulted in a simple layout which planned all circulation up one side of the building, with all living areas on the other. The first floor is one large open-plan living and kitchen area, whilst the second floor accommodates two en-suite bedrooms, each a near mirror-image of the other to the front and back of the plan. 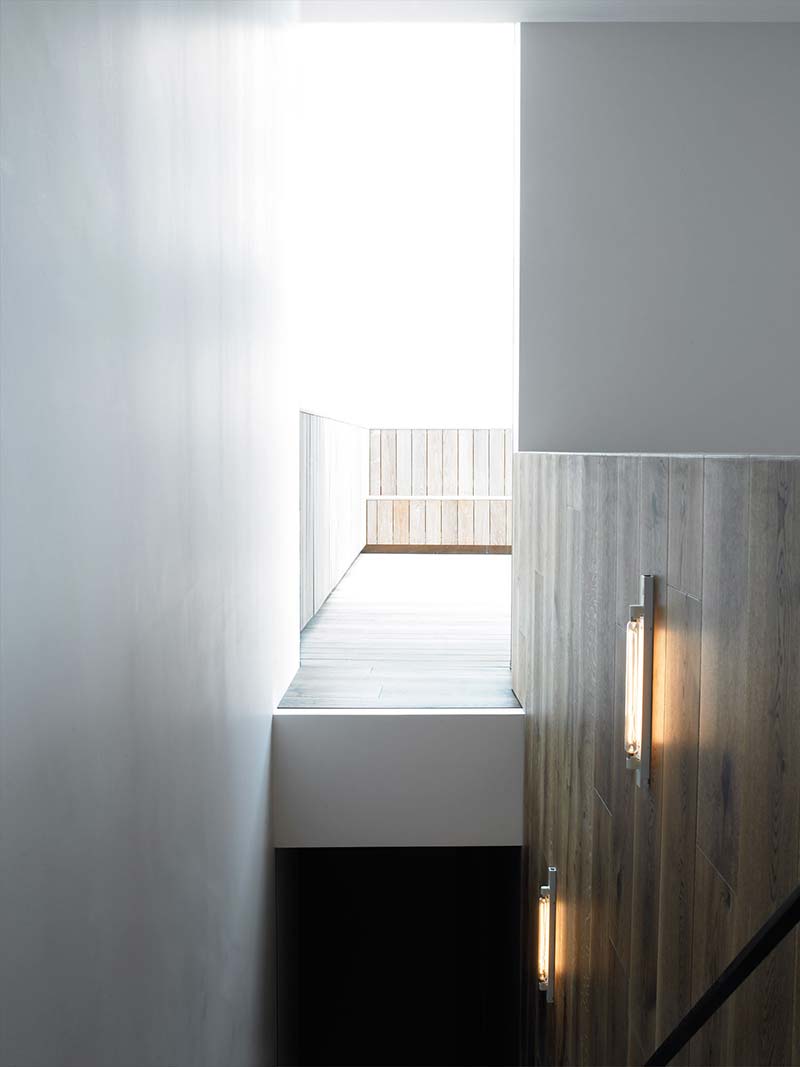 During the development of the project, it became clear that our client wanted the building to be used in one of two ways at any given time. For day-to-day living they wanted the third floor to be closed off to reduce the perceived size of the house. But with the house full of people in the evenings and during the summer months, they wanted the ability to close off the bedrooms and link the first and third floors directly. This was achieved by a large pivoting door which allowed them to open up or close off parts of the house, and at the same time conform to fire regulations for stairwell and escape routes. 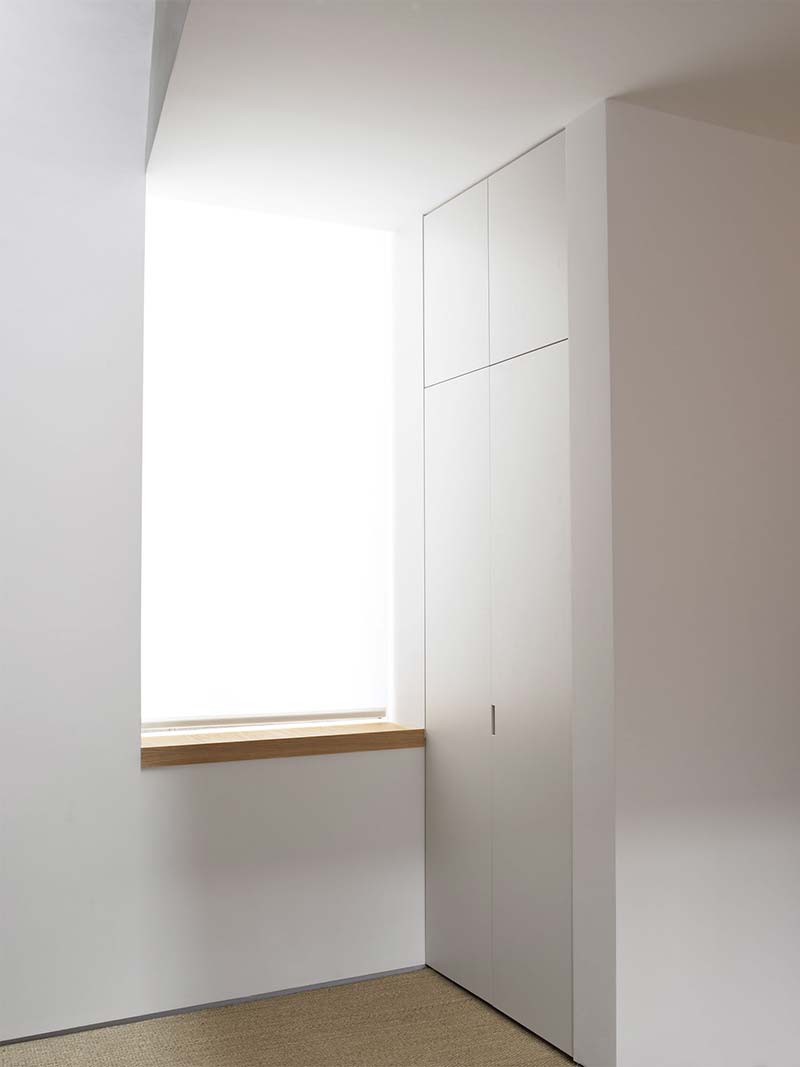 With a relatively deep building plan abutting a party wall to the rear, there was a need to admit as much natural daylight as possible to the back of the building. We used what side light there was available and dropped a light well from a third floor skylight to admit as much light as possible to the rooms furthest removed from the front elevation. The result is a well-lit master bedroom, despite being positioned right at the back of the floor plan. 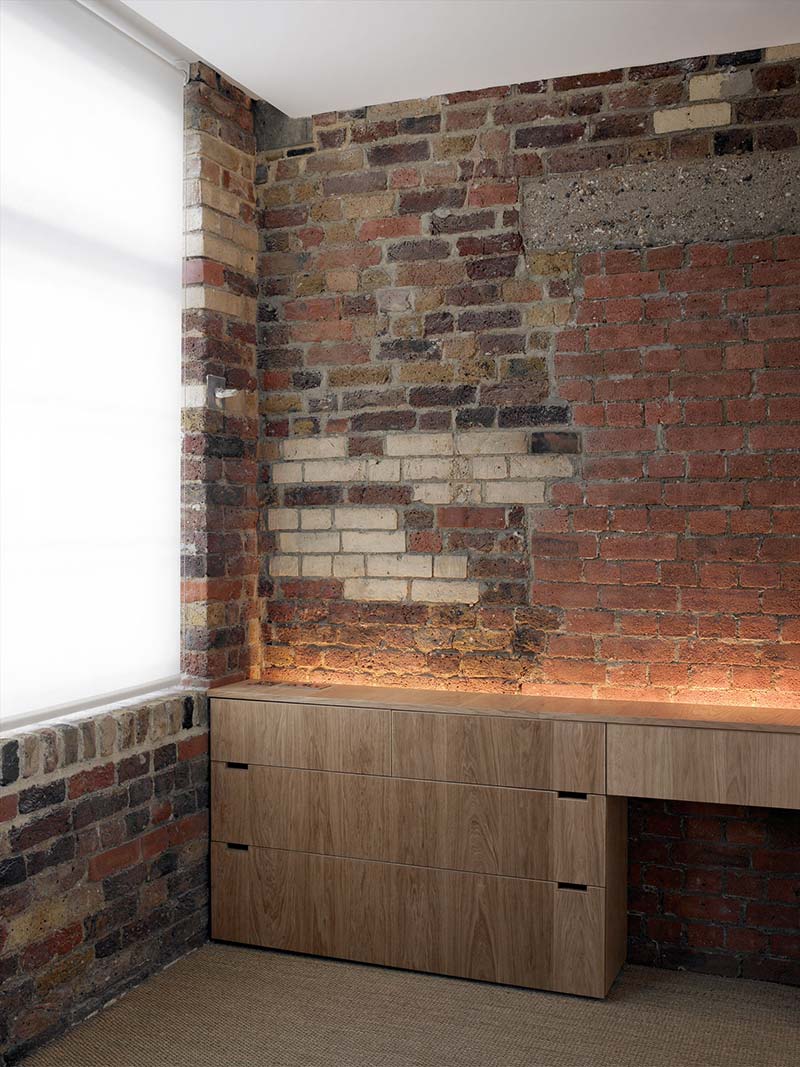 As a hangover from the Stuckist inhabitation, the internal Victorian brickwork was covered in a technicolour paint scheme which concealed a beautiful and vibrant brick bond beneath. The paint was sand-blasted off to reveal the brickwork and provide the background texture to the interior of the two existing floors. The bottom of the staircase to the third floor is the crossover point between the new and the old, and here a timber-clad wall leads up the stairs and wraps around the balustrade to the light and airy environment of the new studio room and roof terrace.